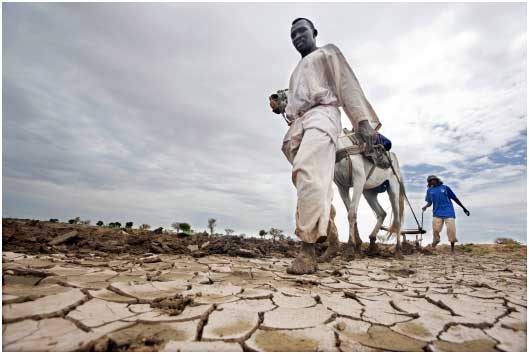 UNITED NATIONS, Jan 4 2019 (IPS) - Record global greenhouse gas emissions are putting the world on a path toward unacceptable warming, with serious implications for development prospects in Africa. “Limiting warming to 1.5° C is possible within the laws of chemistry and physics, but doing so would require unprecedented changes,” said Jim Skea, cochair of the Intergovernmental Panel on Climate Change (IPCC) Working Group III.

But IPCC, the world’s foremost authority for assessing the science of climate change, says it is still possible to limit global temperature rise to 1.5° C—if, and only if, there are “rapid and far-reaching transitions in land, energy, industry, buildings, transport, and cities.” For sub-Saharan Africa, which has experienced more frequent and more intense climate extremes over the past decades, the ramifications of the world’s warming by more than 1.5° C would be profound.

The odds are long but not impossible, says the IPCC. And the benefits of limiting climate change to 1.5° C are enormous, with the report detailing the difference in the consequences between a 1.5° C increase and a 2° C increase. Every bit of additional warming adds greater risks for Africa in the form of greater droughts, more heat waves and more potential crop failures.

Recognizing the increasing threat of climate change, many countries came together in 2015 to adopt the historic Paris Agreement, committing themselves to limiting climate change to well below 2° C. Some 184 countries have formally joined the agreement, including almost every African nation, with only Angola, Eritrea and South Sudan yet to join. The agreement entered into force in November 2016.

In December 2018, countries met in Katowice, Poland, for the Conference of the Parties to the United Nations Framework Convention on Climate Change (UNFCCC)—known as COP24—to finalise the rules for implementation of the agreement’s work programme. As part of the Paris Agreement, countries made national commitments to take steps to reduce emissions and build resilience. The treaty also called for increased financial support from developed countries to assist the climate action efforts of developing countries.

But even at the time that the Paris Agreement was adopted, it was recognized that the commitments on the table would not be enough. Even if the countries did everything they promised, global temperatures would rise by 3° C this century. According to the IPCC, projections show that the western Sahel region will experience the strongest drying, with a significant increase in the maximum length of dry spells. The IPCC expects Central Africa to see a decrease in the length of wet spells and a slight increase in heavy rainfall.

West Africa has been identified as a climate-change hotspot, with climate change likely to lessen crop yields and production, with resultant impacts on food security. Southern Africa will also be affected. The western part of Southern Africa is set to become drier, with increasing drought frequency and number of heat waves toward the end of the 21st century.

A warming world will have implications for precipitation. At 1.5° C, less rain would fall over the Limpopo basin and areas of the Zambezi basin in Zambia, as well as parts of Western Cape in South Africa. But at 2° C, Southern Africa is projected to face a decrease in precipitation of about 20% and increases in the number of consecutive dry days in Namibia, Botswana, northern Zimbabwe and southern Zambia. This will cause reductions in the volume of the Zambezi basin projected at 5% to 10%.

If the global mean temperature reaches 2° C of global warming, it will cause significant changes in the occurrence and intensity of temperature extremes in all sub-Saharan regions. West and Central Africa will see particularly large increases in the number of hot days at both 1.5° C and 2° C. Over Southern Africa, temperatures are expected to rise faster at 2° C, and areas of the southwestern region, especially in South Africa and parts of Namibia and Botswana, are expected to experience the greatest increases in temperature.

Perhaps no region in the world has been affected as much as the Sahel, which is experiencing rapid population growth, estimated at 2.8% per year, in an environment of shrinking natural resources, including land and water resources.

Inga Rhonda King, President of the UN Economic and Social Council, a UN principal organ that coordinates the economic and social work of UN agencies, told a special meeting at the UN that the region is also one of the most environmentally degraded in the world, with temperature increases projected to be 1.5 times higher than in the rest of the world.

Largely dependent on rain-fed agriculture, the Sahel is regularly hit by droughts and floods, with enormous consequences to people’s food security. As a result of armed conflict, violence and military operations, some 4.9 million people have been displaced this year, a threefold increase in less than three years, while 24 million people require humanitarian assistance throughout the region.

Drought, desertification and scarcity of resources have led to heightened conflicts between crop farmers and cattle herders, and weak governance has led to social breakdowns, says Mr. Thiaw. The shrinking of Lake Chad is leading to economic marginalization and providing a breeding ground for recruitment by terrorist groups as social values and moral authority evaporate.

*Africa Renewal, which is published by the United Nations, reports on and examines the many different aspects of the UN’s involvement in Africa, especially within the framework of the New Partnership for Africa’s Development (NEPAD). It works closely with the many UN agencies and offices dealing with African issues, including the UN Economic Commission for Africa and the Office of the Special Adviser on Africa.