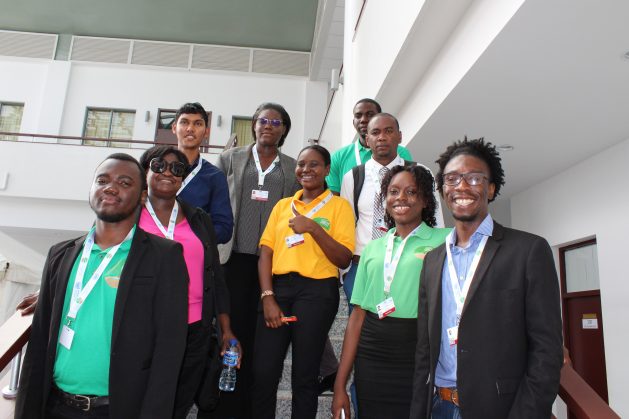 GEORGETOWN, Jan 30 2019 (IPS) - A group of youngsters in the Caribbean who promote environmental protection in the region is on a drive to empower other youth to address some of the big issues facing their generation.

National Coordinator of Caribbean Youth Environment Network (CYEN), Kiefer Jackson, says the organisation has been working to gather the youth perspective, build capacity at a grassroots level and fill the gaps that would have been missed by government initiatives or plans.

“The Ministry of Presidency’s Office of Climate Change has recognised the work being done by this chapter of CYEN and has asked us to join with them this year in facilitating their climate change awareness in schools around Guyana,” Jackson told IPS.

“We believe this partnership to be one step in the direction of ensuring that young people play an active role in climate action and ensure non-governmental organisation and government partnership for the betterment of our people.”

As far as capacity is concerned, last year, CYEN was approved by YOUNGO, the Children and Youth constituency to United Nations Framework Convention on Climate Change, to undertake a Conference of Youth in the countries where CYEN operates. CYEN’s website reflects a presence in Antigua and Barbuda, Barbados, Saint Vincent and the Grenadines, and Saint Lucia, among others.

Jackson added that the activity was used to assist in further building the current participatory environmental awareness programmes for young citizens of Guyana.

“We have also been engaging in a series of panel discussions, in an effort to inform and educate young people on the Sustainable Development Goals,” Jackson said.

“The last talk would have been on Goal 13 (Climate Action). Based on the feedback of these activities, we have recognised that young people in Guyana, have robust and innovative ideas and we have been working on creating a platform for them to showcase their ideas or projects that guarantee the strengthening resilience and adaptive capacity to climate change in Guyana.”

In addition to facilitating larger scale education and awareness, Jackson believes more attention should be given to ensuring adequate and appropriate infrastructure and housing that can withstand, as far as possible, the perils of climate change.

Guyana is plagued by poorly-maintained drainage and sea defence infrastructure.

The low coastal plain which houses the capital Georgetown, and where a large percentage of the population resides, is below sea level and at high risk of flooding. “With the effects of climate change becoming even more present through intensifying natural disasters, more should be done to prepare this region for what seems to be inevitable,” Jackson said.

“We can also ensure that there are early warning systems and more accurate forecasts – information that can be passed on to farmers through simple technology.”

In addition to being prone to flooding, Guyana is also affected by drought.

Joseph Harmon, Minister of State in the Ministry of the Presidency of Guyana, says drought and flooding have proven to be a double-edged sword, especially for the country’s farmers.

“Some people might find it difficult to appreciate that in a country like Guyana, a part of the tropical rainforest, that you can still have portions of this land which have drought,” Harmon told IPS.

“But I can say to you that in the south Rupununi . . . we do have some portions of that land that for a part of the year they have drought, and at other times they have flooding.”

He said government has taken steps to address the problem of flooding with the implementation of projects by the Ministry of Agriculture.

“They are dealing with how to sustainably harvest water so that it can be utilised for farming and other domestic purposes,” Harmon said.

“In the period of drought, we are now looking at the question of utilisation of wells.”

In December 2017, the Guyana Government and the Government of the Federative Republic of Brazil signed a technical cooperation agreement for the implementation of a project to reduce the impact of drought in the Upper Takatu-Upper Essequibo, Region 9 of Guyana.

Harmon said the agreement was established to mitigate the historical impact of droughts in the Upper Takutu-Upper Essequibo region and its implementation has so far resulted in the drilling of eight wells that are now providing year-round potable water to the indigenous peoples in the south Rupununi.

In its quest to bridge the gap between climate change and climate awareness, Jackson said CEYN is hampered by limited availability of financial resources, particularly for long term projects that could ensure sustainability.

Additionally, she said quite often, urgent need for climate action is hampered by the effects not always being glaring to the public eye.

“So, the challenge is making climate seem real in the context of day to day life in the Caribbean,” Jackson said.

“Hurricane season is once a year. Sea level rise is slow and almost unnoticeable. We try to identify indicators which can catch people’s attention, and which are personal as well as immediate.”