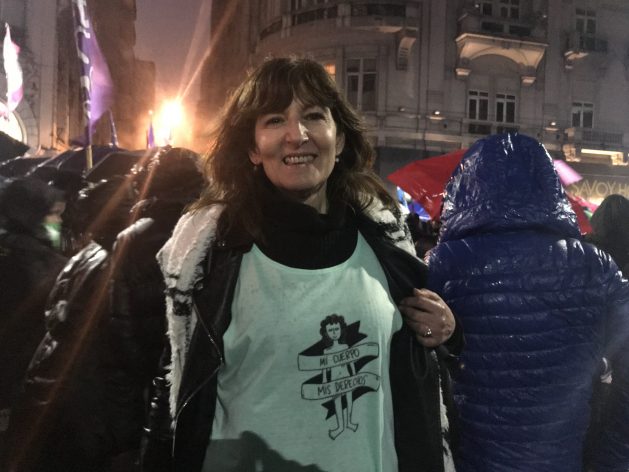 UNITED NATIONS, Jun 3 2019 (IPS) - Abortion has long been a contentious issue across the world, and the debate is only heating up, prompting women to stand up and speak out for their reproductive rights.

“The failure of states to guarantee reproductive rights is a clear violation of human rights,” said President and CEO of the Center for Reproductive Rights (CRR) Nancy Northup.

“The centre is committed to using the power of law to ensure that women and girls…are guaranteed access to sexual and reproductive health rights and services,” she added.

Human Rights Watch’s Senior Researcher Margaret Wurth echoed similar sentiments, stating: “No rape survivor should be forced into motherhood without the chance to consider a safe and legal abortion.”

Latin American countries have some of the most restrictive abortion laws in the world. For instance, Nicaragua has a complete ban on abortion while Guatemala has an exception only when a girl or woman’s life is at risk.

Though the risk of maternal mortality increases when pregnancies occur in girls younger than 14, still many girls are forced to give birth.

In Nicaragua, eight of 10 sexual violence survivors are girls under 13 and the country has the highest teenage pregnancy rate in Latin America with 28 percent of women giving birth before the age of 18.

Fatima was only 12 years old when she became pregnant after being raped by a man in her community in Guatemala. Though the pregnancy was risky, health care providers never offered her a legal abortion.

After more than a year of abuse by her priest, Lucia became pregnant at the age of 13 in Nicaragua.

Fatima and Lucia are now young women and two of four women who have brought their cases to the United Nations Human Rights Committee with the support of organisations such as CRR and Planned Parenthood Global in order to seek justice and demand access to safe and legal abortion.

“Too many young girls in Latin America, and around the world, have been put in situations that threaten their rights and put their lives at risk because they are not able to access abortion care,” said head of Planned Parenthood Global Leana Wen.

“Forcing young girls to continue a pregnancy no matter their circumstances or wants, is not only cruel, but will have devastating impacts for them, their families, and their communities,” she added.

People around the world have since showed solidarity the four women, posting #NinasNoMadres—they are girls, not mothers.

Access to abortion has also become a point of contention in the United States as a total of 27 bans have been enacted across 12 states so far in 2019.

Most recently, Louisiana signed a bill banning abortions once a heartbeat is detectable, known as a “heartbeat bill.”

A foetal heartbeat can occur as early as six weeks into a pregnancy, often before many women know they’re even pregnant. The legislation does not include exceptions for rape or incest.

If the bill becomes law, any doctor who performs an abortion could face imprisonment for one to 10 years and/or a fine ranging from 10,000 to 100,000 dollars.

Missouri has passed a similar bill with a penalty of up to 15 years in prison and the loss of a doctor’s professional license.

Missouri’s last and only abortion clinic was expected to close on Friday, but a judge granted a restraining order that temporarily allowed the clinic to continue. If the clinic had closed, Missouri would have been the first state in 45 years without access to abortion.

While abortion is still legal at the federal level, such moves threaten safe, accessible and affordable abortion care across the country.

“We are very concerned that several U.S. states have passed laws severely restricting access to safe abortion for women, including by imposing criminal penalties on the women themselves and on abortion service providers,” said UN human rights spokeswoman Ravina Shamdasani.

“We are calling on the United States and all other countries to ensure that women have access to safe abortions. At an absolute minimum, in cases of rape, incest and foetal anomaly, there needs to be safe access to abortions,” she added.

Not only does a complete ban on abortion drive women and girls to seek unsafe “back street” methods of termination, but a study found that women and girls are also more likely to experience short-term anxiety and loss of self-esteem, economic insecurity and poverty, and continued exposure to intimate partner violence.

But there is hope yet.

Organisations such as the American Civil Liberties Union and Lambda Legal have filed lawsuits to help protect abortion rights in the U.S.

And the UN can play a role globally too.

In 2001, a 17-year-old Peruvian girl know only as K.L. was denied an abortion after being diagnosed as having a foetus with anencephaly at 14 weeks.

The refusal had serious mental and physical consequences on her health as she was forced to continue her pregnancy and her baby, once born, only survived four days.

It was the first time a UN Committee held a country accountable for failing to ensure access to safe, legal abortion.

The committee also ordered financial compensation to K.L, who finally received it a decade later in 2015.

“In seeing justice delivered in K.L.’s case—watching it go from A to Z—we are part of an inspiring historic moment,” said Lilian Sepúlveda who directs CRR’s global legal programme and was one of the attorneys involved in the case.

“We are witnessing the results of advocates’ dedicated perseverance and the power of the UN and other international bodies to ensure our basic human rights to dignity, health, and freedom from ill-treatment,” she added.

Such efforts are more urgent than ever to ensure access to justice as well as safety and health for women and girls.