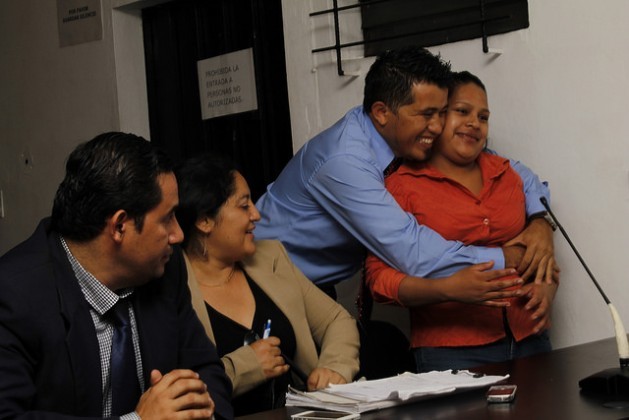 One of her defence lawyers hugs Carmelina Pérez when an appeals court in eastern El Salvador declares her innocent of homicide, on Apr. 23. She had been sentenced to 30 years in prison in June 2014 after suffering a miscarriage. In El Salvador women, especially the poor, suffer from the penalisation of abortion under any circumstances. Credit: Edgardo Ayala/IPS

SAN SALVADOR, Apr 30 2015 (IPS) - International and local human rights groups are carrying out an intense global campaign to get El Salvador to modify its draconian law that criminalises abortion and provides for prison terms for women.

Doctors, fearing prosecution, often report poor women who end up in the public hospitals with complications from miscarriages, some of whom are sent to jail for supposedly undergoing illegal abortions.

There are currently 15 women in prison who were sentenced for alleged abortions after reported miscarriages. At least 129 women were prosecuted for abortions between 2000 and 2011, according to local organisations.

The campaign by Amnesty International and local human rights groups collected 300,000 signatures on a petition demanding a modification of El Salvador’s total ban on abortion.

This Central American country of 6.3 million people is one of the few nations in the world to ban abortion under any circumstances and penalise it with heavy jail terms.

The campaign was launched when a woman was freed by an appeals court. She had been found guilty of homicide and spent 15 months in prison.

Carmelina Pérez wept tears of joy when a judge declared her innocent on Apr. 23, after a hearing in a court in the eastern city of La Unión, the capital of the department of the same name.

“I’m happy, because I will be back with my son and with my family, free,” a still-handcuffed Pérez told IPS. She has a three-year-old son in her native Honduras.

Pérez, 21, was working as a domestic employee in the town of Concepción de Oriente, in La Unión, when she suffered a miscarriage. She ended up sentenced in June 2014 to 30 years in prison for homicide – a sentence that was overturned on appeal.

That was the year the legislature modified the penal code to make abortion illegal under all circumstances, even when the mother’s life is at risk, the fetus is deformed or unviable, or the pregnancy is the result of incest or rape.

Article 1 of the Salvadoran constitution was amended in January 1999 to protect the right to life from the moment of conception, making it even more difficult to reform the ban on abortion.

Carmen Guadalupe Vásquez, 25, was another one of the 17 women imprisoned, who are referred to by rights groups as “Las 17”. She had been sentenced to 25 years after being raped and suffering a miscarriage. She spent seven years in prison but was pardoned by the legislature in January 2015, after the Supreme Court recognised prosecutorial errors in her trial.

And in November 2014, 47-year-old Mirna Ramírez was released after serving out her 12-year sentence.

At least five other women have been accused and are in prison awaiting final sentencing.

Most of these women sought medical care in public hospitals after suffering miscarriages or stillbirths, but were reported by hospital staff fearful of being accused of practicing abortions. Many were handcuffed to the hospital bed and sent to prison directly, under police custody.

“The total ban on abortion is a violation of the human rights of girls and women in El Salvador, such as the rights to health, life and justice,” Amnesty International Americas director Erika Guevara said at an Apr. 22 forum in San Salvador.

Although there are no recent figures, a 2013 study carried out by the Agrupación Ciudadana por la Despenalización del Aborto (Citizens’ Coalition for the Decriminalisation of Abortion) found that 129 women were accused of abortion between 2000 and 2011.

Of this total, 49 were convicted – 23 for abortion and 26 for homicide in different degrees. In these cases, the prosecutor’s office argued that the fetuses were born alive and the mother was responsible for their death.

Of the 129 women accused, seven percent were illiterate, 40 percent had only a primary school education, 11.6 percent had a high school education and just 4.6 had made it to the university. And 51.1 percent of the accused had no income while 31.7 had small incomes.

In El Salvador, it is no secret that middle- and upper-class women have access to safe abortions in private clinics, and are neither reported by the doctors nor arrested and charged.

In its petition to modify the ban, Amnesty International demanded that El Salvador ensure access to safe and legal abortion in cases of rape or incest, where the woman’s health or life is at risk, and where the fetus is malformed or unlikely to survive.

Only the Vatican, Haiti, Nicaragua, Honduras, Surinam and Chile have total bans on abortion, although in Chile the legislature is studying a bill that would legalise therapeutic abortion (under the previously listed circumstances).

Delegates from Amnesty International, the Agrupación Ciudadana, and the Center for Reproductive Rights met on Apr. 22 with representatives of President Salvador Sánchez Cerén of the left-wing Farabundo Marti National Liberation Front, to demand a reform of the law and deliver the 300,000 signatures.

They also met with the presidents of the legislature and judiciary.

“There is at least a willingness to talk, we see a certain openness,” activist Paula Ávila with the Center for Reproductive Rights, an international organisation based in the United States, told IPS.

Ávila added that as women who have suffered these cases increasingly speak out and tell their stories, the state will have to accept the need to sit down and talk.

The Center, along with the Agrupación Ciudadana and the Feminist Collective for Local Development, demanded a response from the Salvadoran state to a communication sent on Apr. 20 by the Inter-American Human Rights Commission (IACHR) urging the state to recognise its responsibility in the death of “Manuela”.

Manuela – who never allowed her real name to be revealed – had a stillbirth, was erroneously accused of having an abortion, and was sentenced to 30 years in prison.

It was later discovered that she had lymphatic cancer, a disease that can cause miscarriages. She died in prison in 2010 without being treated for her cancer.

The IACHR has accepted the case and has given the Salvadoran state three months to respond with regard to its responsibility for her death.

The debate on the flexibilisation of the total ban on abortion is marked by the “machismo” of Salvadoran society and moralistic and religious overtones, with heavy pressure from Catholic Church leaders and evangelical churches that stands in the way of political changes.

But the release of Carmelina Pérez in La Unión has given rise to hope in similar cases.

For the first time, an appeals court judge dismissed the statement of the gynecologist who testified against the defendant. That decision was key in overturning her conviction.