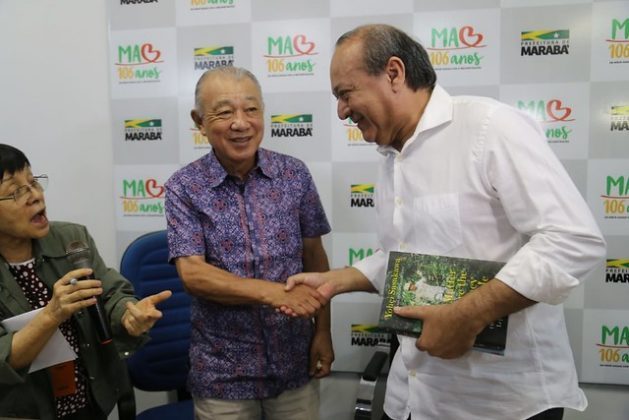 Yohei Sasakawa (C), president of the Nippon Foundation and World Health Organisation Goodwill Ambassador for Leprosy Elimination, shakes the hand of Sebastião Miranda Filho, the mayor of Marabá in northern Brazil, where the foundation finances a project to distribute food to poor families affected by the disease, to encourage them to complete treatment. Credit: Artur Custodio/IPS

BRASILIA, Jul 8 2019 (IPS) - When cases of Hansen’s disease, better known as leprosy, increase in Brazil, it is not due to a lack of medical assistance but to the growing efficacy of the health system in detecting infections, contrary to the situation in other countries.

This unique aspect of the disease was highlighted during a Jul. 2-7 visit by Nippon Foundation President Yohei Sasakawa to the northern Brazilian states of Pará and Maranhão, to learn about and reinforce efforts to reduce the incidence of the disease.

Sasakawa continued his tour of this Latin American country on Monday Jul. 8 in Brasilia, where he will meet with President Jair Bolsonaro and other authorities from the executive, legislative and judicial branches, before returning to Japan on Wednesday Jul. 10.

The Nippon Foundation funds several projects in Brazil, one of which facilitates telephone and Internet communications, to expand and improve information about this chronic disease and combat the prejudice, stigma and discrimination surrounding it.

Early detection is one of the recommendations stressed in Sasakawa’s meetings with authorities in the Amazon jungle state of Pará, according to Claudio Salgado, a professor at the Federal University of Pará who is president of the Brazilian Hansenology Society.

“Hanseniasis (as the disease is called in Brazil) doesn’t manifest itself in acute outbreaks of fever, chills and confusion, like malaria,” he told IPS from Belem do Para.

Symptoms, such as numb spots on the skin, often take years to appear, when the effects are already irreversible, including loss of fingers and crippling or paralysis of the hands or entire limbs.

In addition, the cases are widely dispersed, making it even more difficult to identify patients, even though there are means of early detection, such as the screening of household contacts of leprosy patients.

An estimated 95 percent of people have natural immunity to infection. Hansen’s disease is not as contagious as many people believe. It takes prolonged, close contact over many months with an untreated leprosy patient to catch the disease, and patients are no longer contagious after only a few days of antibiotic treatment.

For all these reasons, it could be deceptive to set quantitative goals, such as the target adopted by the World Health Organisation (WHO) to “eliminate” leprosy by the year 2000, Salgado argued. “Elimination” is defined as a prevalence rate of less than one case per 10,000 persons a year.

The battle against Hansen’s disease gained a key ally in 1982, when multidrug therapy became available. More than 16 million people have been cured since then, according to WHO.

But Salgado calls into question statistics that point to a sharp reduction in cases, which he said is epidemiologically impossible. He also throws doubt on the claim that Brazil accounts for 92 percent of all new cases in the Americas, as recognised by the Brazilian Health Ministry in its National Strategy to Combat Hanseniasis 2019-2022.

The governor of Maranhão, Flavio Dino, held a dinner for the delegation of the Nippon Foundation, which funds projects for those affected by Hansen’s disease in several cities in this state in Northeast Brazil. The visit and meetings with health officials bolstered new efforts to combat the disease and its consequences, such as disabilities, stigma and discrimination. Credit: Artur Custodio/IPS

He says this indicates that very different situations with respect to leprosy, between Brazil and its neighbours, in spite of similar economic, social and environmental conditions.

An apparent paradox: a country where diagnosis and treatment of Hansen’s disease is reduced would have favourable statistics, in contrast with the likely expansion of leprosy. In other words, fewer cases would be detected, even if the situation was actually getting worse.

In Maranhão, the second Brazilian state visited by Sasakawa, the rate is high: 4.4 new cases per 10,000 persons.

“We detect 3,125 cases per year on average,” reported Lea Terto, superintendent of Epidemiology and Disease Control at the local Health Ministry.

The fact that Maranhão is the state with the largest number of infected children and adolescents under 15 is a concern, because it indicates that they are living with untreated adults, he told IPS from the regional capital, São Luís.

Sasakawa was welcomed by health workers at the clinics, former leprosariums and cities he visited, who celebrated the benefits of projects funded by the Nippon Foundation.

Maranhão was the state that benefited the most from a project implemented since 2017, aimed at strengthening detection and treatment of Hansen’s disease in the 20 municipalities with the highest prevalence of the disease, Artur Custodio, national coordinator of the Movement for the Reintegration of Those Affected by Hanseniasis (Morhan), told IPS from São Luís.

The visit was “very positive” in terms of strengthening the disposition of those involved in the issue and bolstering the local government’s commitment to combatting the disease and the problems that hinder its prevention, Terto said.

She was impressed by Sasakawa’s statement that “people who are prejudiced are sicker” than patients with Hansen’s disease.

“Active search and exams of household contacts” are the priorities of her work, to “reduce prevalence in a concrete and responsible way,” which means a slow reduction of about two percent of new cases a year, said Terto, who has been a nurse for 37 years.

It is actually better if more cases appear than expected, she said, because it means that new untreated patients have been identified.

In addition to the difficulties of making leprosy visible, there are concerns about people quitting treatment, which can last from six months to more than a year depending on the severity of the case. In the most complex cases, a major effort is required to ensure that the patients stick with the treatment until the leprosy bacteria is eliminated.

To encourage patients to complete the multidrug therapy, the Foundation is funding the distribution of baskets of basic foodstuffs to affected families in Marabá, a city in the interior of the state of Pará, visited by Sasakawa on Jul. 3.

Better nutrition gives a boost to the treatment, which is effective if the infected person takes the antibiotics for the prescribed period of time.

Sasakawa began his tour in northern Brazil with a visit to the Marcello Candia Clinic, a dermatology reference unit in Marituba, a city of 108,000 inhabitants in Pará.

A former leprosarium marked the history of the city and of José Picanço, head of Morhan in Pará. He and his two siblings were separated from their parents, who had the disease and were isolated in the institution in 1972. Picanço and his siblings were also treated like “lepers”.

Children of people with leprosy were taken away from their parents and placed in orphanages. It is estimated that between 15,000 and 20,000 people in Brazil suffered – and still suffer – the social and psychological consequences of hanseniasis, because of the former law for the segregation of people with the disease.

Picanço’s parents, who lived until 2007, at least achieved the right to compensation for the violence perpetrated against them by the State. But their grown children continue to fight for this right as victims.

“There are states, such as Minas Gerais and Ceará, that are working towards recognition of this right, by government decree or bills making their way through parliament. But since the problem resulted from a national policy, it is up to the federal government to compensate us,” Picanço told IPS from Belem.

He said Sasakawa’s visit strengthened the struggles for early diagnosis of the disease, the rights of those affected and the need for greater coverage of hanseniasis in the media, which is currently limited to an annual campaign in January.