Rebecca Root is a Reporter and Editorial Associate at Devex 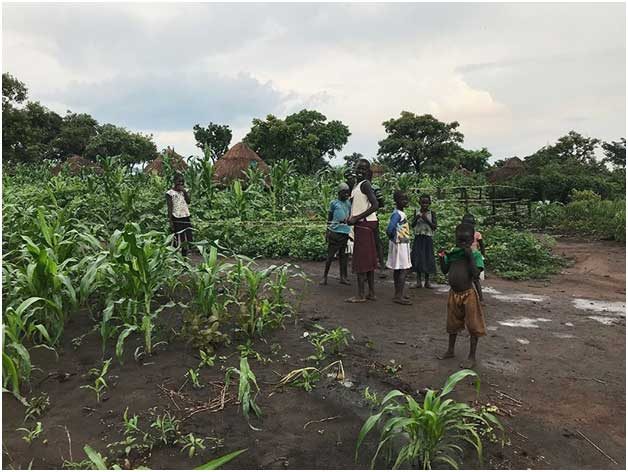 It can take anywhere between a few months and a year for individuals to learn permagarden techniques. Credit: Rebecca Root

KAMPALA, Uganda, Jul 24 2019 (IPS) - As the rain hammers down, Aparo Dorin sits on the damp floor of her one-room hut in zone 12, block 5A, of the Palabek refugee camp in northern Uganda.

A young widower and caregiver to nine children — six of her own and three orphans she’s taken in — Dorin fled from South Sudan following attacks on her village.

While the others are at school, three of the children sit around Dorin, visibly weary. They stare at the rain and yawn almost in synchronization before succumbing to slumber.

Maybe it’s the rain or a lack of sleep in such cramped conditions that is leaving them lacking in energy at 2 p.m. Or perhaps it’s the food deficit.

While the World Food Programme (WFP) provides monthly food packages consisting of maize, oil, salt, sugar, and beans to the camp’s residents, portions are inadequate due to a lack of resources and the ever-rising number of new arrivals.

Toward the end of the month, supplies start to wane. If the next delivery is late — as it was this month — starvation looms. Dorin recalls a period of five days when the family had almost nothing to eat.

“Coordinating and ensuring that product is getting out when it should is really critical for the survival of everybody in the settlement,” said Robert Ackatia-Armah, head of nutrition at WFP Uganda, adding that malnutrition is an issue particularly in camps where new people, severely malnourished, continue to arrive.

Aneno Lily, just a few huts over, is in the same situation as Dorin. She travelled across the border 18 months ago with two small children after her husband was killed.

The prospect of returning home seems far away. South Sudan has been plagued with civil war — and food shortages — since 2013, forcing many to flee and making the situation at the border with Uganda one of the largest refugee crises in Africa. 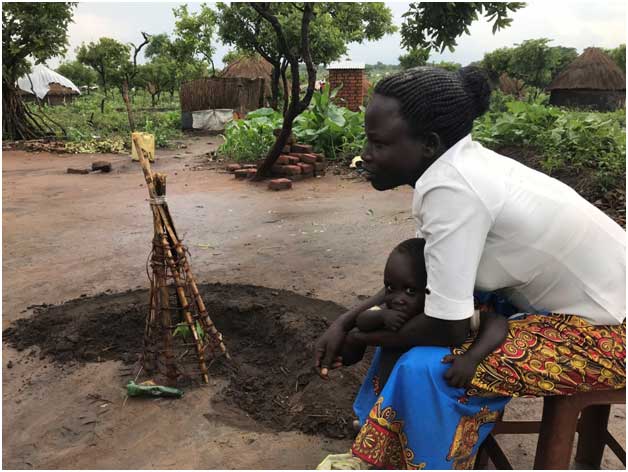 Palabek camp alone — just one of 14 others in the area — hosts more than 38,000 refugees. The prevalence of acute malnutrition is higher than any of the region’s other camps at 12%. Anemia among those aged 6-59 months old sits at 46%.

Globally, malnutrition contributes to half of child deaths, said Mesfin Teklu Tessema, senior director of health at the International Rescue Committee. But the situation is exacerbated in humanitarian settings.

With limited funding, a lack of access to health care facilities in camps, and the short-term approach of humanitarian aid, the international community is yet to find a long-term solution to the issue.

Alongside many of the experts who spoke to Devex, Tessema stressed the need to find new solutions and innovative ways of tackling nutritional needs for those living in displacement camps.

Amid the mud and rain of Palabek camp, one innovative approach is already proving to be a lifeline for many.

“Permagardens” are 30 by 30 meter plots of land, or minigardens, that are allocated per household and managed by refugees themselves following training.

Introduced to the camp in 2017 by African Women Rising — a nonprofit organization that works to empower women after war — the gardens are cultivated in a way that maximizes the amount of crops, trees, and plants grown throughout that site.

The idea is to have a small, intensive garden that can produce a lot of food, said Linda Eckerbom Cole, executive director at AWR, explaining that the permagardens need little space but are only present in the blocks and zones that AWR have been assigned to work in. 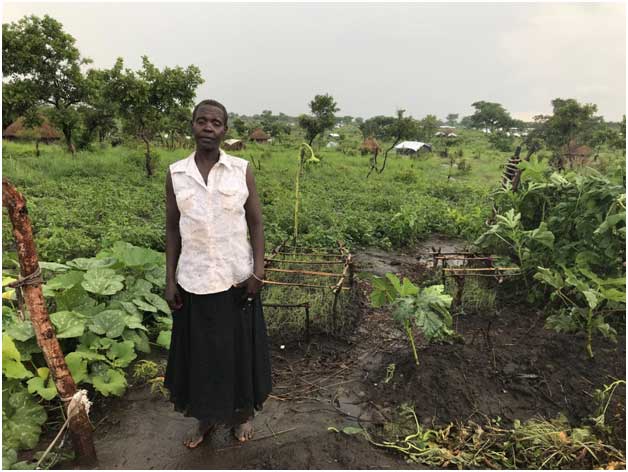 Even in the dry season when the harvest might not be as strong, Dorin said she has been able to dry the produce out and store it. Credit: Rebecca Root

Permaculture — a type of agricultural ecosystem designed to be sustainable and self-sufficient — and biodynamic farming techniques that focus on adding vitality to the produce enable food to grow in a 12 to 14-day cycle.

The approach was designed by Eckerbom Cole’s husband, Thomas Cole, a senior technical adviser at AWR who specializes in this type of agriculture.

It was originally part of their work with local residents to address post-conflict recovery, but AWR adapted it to additionally focus on the nutritional needs of refugees as they began arriving at Palabek two years ago.

The Ugandan government has a decades-old policy of allotting a small plot of land to refugees, which they typically use to build a home or attempt to farm — but traditional farming requires more space.

“Refugees don’t have a lot of space, so it’s important that the space they do have is used as effectively as possible,” Eckerbom Cole said.

The first step in the program is to show those selected to take part — determined by levels of vulnerability within AWR’s designated zone — what a permagarden looks like, before putting the group through three phases of training: basic permagardening techniques, pest control, and post-harvest handling that demonstrate how to use the natural resources to yield food.

“Food is a huge issue in the camps, so one of the main things we’re looking at is helping refugees produce more food and providing them with skills they can bring with them when they go back to South Sudan,” Eckerbom Cole said.

“We look at water and soil conservation to make sure the gardens use the rainfall as much as possible.”

This means that while the rain has the family cooped up inside, it marks much-needed nourishment for the okra, onions, and peas emerging from the soil.

The total cost of developing, training, and supporting a permagarden is $85. AWR’s community mobilizers continue to visit and support the 2,000 households with permagardens over a period of three years to ensure they remain in optimum condition.

Each of the families is then able to harvest greens three to four times a week, as well as a variety of other fruits and vegetables. The gardens aren’t about growing calories, but provide a range of micronutrients and vitamins that aren’t found in the food aid rations they receive each month.

“One of the main things we’re looking at is helping refugees produce more food and providing them with skills they can bring with them when they go back to South Sudan,” says Linda Eckerbom Cole, executive director at African Women Rising

Even in the dry season when the harvest might not be as strong, Dorin said she has been able to dry the produce out and store it. She’s also able to sell anything that’s left over at the camp’s market, giving her some money to buy other essential items.

AWR plans to scale the project and has already been approached by other agencies, including the United Nations, looking to replicate the model.

The U.S. Agency for International Development is promoting the permagarden approach across many of the countries in its Food for Peace portfolio, including the Democratic Republic of the Congo, Ethiopia, Malawi, Zimbabwe, and Nepal.

The Danish Refugee Council is also implementing it in some of the other West Nile refugee camps in Uganda, seeing it as a real solution to malnutrition in the face of ever-changing climate conditions and fluctuating food aid.

The most important thing to recognize is that teaching the skills is not a quick process, Eckerbom Cole said, explaining that it can take anywhere between a few months and a year for individuals to learn the techniques and implement them successfully.

“Even though all these people are farmers, this is a completely new way of farming, and if you want it to be successful, you have to give it the time it needs,” she said.

There can also be challenges in mobilizing participants who often have to spend days walking back and forth to the distribution center waiting to collect their food package for the month.

Ackatia-Armah explained that such programming also requires a multisectoral approach, and the involvement of different partners in the areas of water, sanitation, livelihoods, agriculture, and nutrition.

“These have different donors and planning calendars and it’s been difficult to bring them together,” he said, but it is being realized under the office of the Prime Minister which leads the coordination of all activities in refugee settlements.

While Lily and Dorin hope to one day return home, dejected by the poor prospects of peace, they say they expect to stay put for the foreseeable future.

But Lily, who sits beside her thriving garden watching the rainwater trickle into the beds, explained that while they had previously been struggling to find vegetables, she has at least found relief in watching the health of her family improve.

This story was originally published by Devex