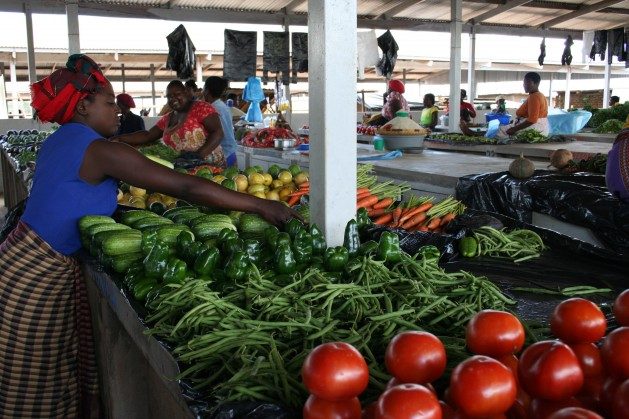 ILLINOIS, United States / ABUJA, Oct 16 2019 (IPS) - United Nations World Food Day is celebrated around the world on October 16 under the theme: “Our Actions ARE Our Future. Healthy Diets for a Zero Hunger World”. This theme is timely, especially, because across Africa and around the world, there has been a gradual rise in malnutrition and diet-related non communicable diseases, as highlighted in The Lancet study and a United Nations Report published earlier this year.

While 45 percent of deaths in children are from nutrition-related causes, mainly malnutrition, diet-related non communicable diseases like obesity is a fast-growing problem across the world causing low- and middle-income countries to face a double burden of malnutrition.

While 45 percent of deaths in children are from nutrition-related causes, mainly malnutrition, diet-related non communicable diseases like obesity is a fast-growing problem across the world causing low- and middle-income countries to face a double burden of malnutrition

Obesity is ubiquitous – every country is dealing with this pandemic in one form or another. Rates of obesity among females aged 5-19 years is 59%, 42% 36%, 8% in U.S., South Africa, Brazil and India respectively.

Research in Ghana shows that children from poorer backgrounds are more vulnerable to food insecurity and narrow dietary diversity. In contrast, consumption of processed foods rich in sugar but poor in nutrients is common among all socioeconomic classes. Showing that obesity does not respect boundaries. In Scotland, about 30% of adults and 13% of children are obese – this is attributable to foods and drinks high in fat, sugar and salt.

It is said that; the youths are the future. However, if the present trends of diet-related non communicable diseases like obesity among youths fueled by unhealthy foods continue, the future would be unhealthy. This is how to make the future healthy.

First, focus on consumption of plant-based nutritious meals among women of child-bearing age. One way to achieve this is by civil society organisations working with government to identify locally available nutritious meals and training families on how best to prepare these meals.

Data shows that most important time for using nutrition to improve cognition and physical development of a child is the first 1000 days of life (from when the woman becomes pregnant, through-out pregnancy, birth and until the baby is 2 years old).

The good news is that, the African continent is endowed with indigenous vegetable plant varieties such as amaranth greens, African nightshade, Ethiopian mustard and fluted pumpkins that are affordable, and highly nutritious and dense in essential micronutrients that are lacking in many of the foods African.

In addition, many of these vegetable plants are highly adapted to the African climate and can endure drought and pests. Further, women that grow these crops for consumption can also earn income by selling the excess vegetables.

Second, all nations should ban artificial trans-fat production and use. Globally, consumption of trans fat accounts for more than 500,0000 deaths due to heart disease every year, according to the World Health Organization.

The harmful effects of trans fat is by raising bad cholesterol and lower good cholesterol levels. Therefore, increasing risk of heart disease, stroke and insulin-dependent diabetes. Already there are lessons from countries that have policies on artificial trans fats.

Third, reduce daily consumption of salt to less than one teaspoonful a day because the sodium contained in salt increases blood pressure.

Hypertension in turn, is implicated in 7.5 million deaths every year.  According to the U.S. Centres for Disease control, more than 70% of the sodium Americans consume comes from processed and restaurant foods. There are several ways to reduce salt consumption such as public education, front-of-package labelling, promotion of salt substitutes, industry reformulation of packaged foods, and intervention for restaurants.

Lastly, countries must come up with comprehensive policy approaches or revise already existing national nutrition policies to address this growing diet-related non communicable diseases. Once they’re set, governments must place high priority on them to ensure that nutrition policies are implemented and followed and that citizens are aware of them.

The complex, widespread and global rise of diet-related health diseases demand that we re-assess the foods we eat every day. Doing so will pave the way to a world where people are healthy.

Dr. Ifeanyi M. Nsofor, a medical doctor, the CEO of EpiAFRIC and Director of Policy and Advocacy at Nigeria Health Watch. I am a 2019 Atlantic Fellow for Health Equity at George Washington University, a Senior New Voices Fellow at the Aspen Institute and a 2006 International Ford Fellow. You can follow me on Twitter @ekemma.