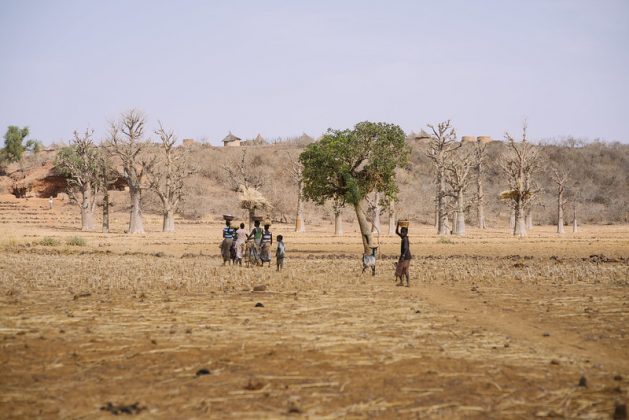 A zone of Baobab reforestation in Burkina Faso. The Sahel is experiencing an overall decrease in rainfall, but also a depletion of soils due to agricultural overexploitation and progressive deforestation of the original savannahs. Courtesy: Ollivier Girard/CIFOR

OUAGADOUGOU, Nov 6 2019 (IPS) - Ibrahim Harouna and his neighbours sit under a tree at his uncle’s house, playing chess and chatting amid the simmering heat of Ouagadougou, the capital of Burkina Faso.

This is how he has been spending most of his time in the year and a half since he lost his job. Harouna worked as farm labourer. But the seasonal small-scale farmer he worked for in northern Burkina Faso let him and two other workers go because their services were no longer needed amid dwindling harvests.

Production had begun failing as desertification and drought took their toll on the land — which had become severely degraded, with half of the farmland soil turning to sand.

The economy in this Sahelian nation of 20.5 million people, located in the hinterland and within the confines of the Sahara, depends heavily on agriculture, forestry and livestock farming.

The sector is dominated by small-scale farms of less than five hectares and its main products are sorghum, millet and maize (the most produced in terms of volume), according to the Food and Agricultural Organization of the United Nations (FAO). Cotton exports are still dominant and represent about 60 percent of total agricultural exports, according to the World Bank.

A visibly stressed Harouna seems to agree, telling IPS: “We have been working on that land for nine years, doing the same thing year in and year out.”

Despite the country’s Sahelian zone in the north receiving less than 600mm average annual rainfall, Harouna says that the previous had been productive: sales were good, money was coming in, and wages were regularly paid.

But nothing lasts forever. Desertification became more prevalent and the honeymoon came to an abrupt end. He recounts: “As time went by, we noticed that temperatures kept unusually rising and the sun became harsher and the rain disappeared. The crops became stunted while others dried out, as the land started to turn into something like sand.”

Confines of the Sahara

Land degradation poses a serious threat to the sustainable development of Burkina Faso. One-third of its national territory, over nine million hectares of productive land, is degraded. This is estimated to expand at an average of 360,000 hectares per year, according to the FAO.

The Sahel is experiencing an overall decrease in rainfall, but also a depletion of soils due to agricultural overexploitation and progressive deforestation of the original savannahs by cutting firewood, bush fires and stray animals, the NGO SOS Enfants explains.

“Climate changes are evident throughout Burkina Faso. The eastern and southwestern parts of the country, which generally have more favourable weather, are increasingly hit by high temperatures and pockets of drought,” the U.N. Development Programme says on Adaptation-undp.org.

From employing 90 percent of the country’s almost 7-million strong workforce in 2012, as per FAO figures, the agriculture sector now provides 80 percent of all jobs, still accounting for a third of the country’s GDP. However, more than 3.5 million people are food insecure, according to a USAID report.

Farmers in Burkina Faso, and especially those living in the Sahelian areas of this country, are now facing a serious problem of food security and growing impoverishment, SOS Enfants has pointed out. Conflicts over land use and massive migrations are persistent.

Armed conflict and terrorism have exacerbated food insecurity, with regular attacks being perpetrated against security forces and civilians by unknown gunmen. Nearly 600 civilians have been killed, and scores wounded in recent years, according to independent figures.

Nearly half a million people were forced from their homes as increased insecurity resulted in a deepening and unprecedented humanitarian situation.

With an urbanisation rate of 5.29 percent – according to Index Mundi figures – Burkina Faso seems to be experiencing one of the highest urbanisation rates in Africa and in the world, as women, children and elderly people flock to the cities, fleeing from climate change challenges, lingering poverty and armed conflict.

“In Burkina, the problem is not the functioning of the democratic system. The crisis is the spread of jihadist violence. [Former President Blaise] Compaoré used to come to understandings with armed groups in Mali, and in return, they left Burkina alone. That did not help Mali, of course,” Paul Melly, Chatham House Africa consultant, tells IPS. The U.N. has stated that some 300,000 people have fled jihadist violence that spilled over from Mali.

“But the present Burkina administration does not cut these sorts of deals, and this leaves the country more exposed,” he points out.

“Moreover,” he says, “Burkina’s security systems used to be strongly oriented towards loyalty towards Compaoré, so his departure left these structures weakened and the current government now had to rebuild them in a way that is compatible with the democratic system. That is a slow and difficult process.”

After Harouna and his colleagues lost their job, they headed to Ouaga (short for Ouagadougou) to stay with their respective families. With nothing much to do, they believe their only option is to leave the country, adding their names to a growing list of people pushed out of their homes by the devastating impacts of climate change.

“My former colleagues have already left the country, one is in Morocco as we speak, looking for a way to cross over to Spain and the other one is in Benin, where he intends to take the boat to get either to Equatorial Guinea or Gabon,” Harouna says.

More than 143 million people are set to become climate migrants by 2050 in Sub-Saharan Africa, South Asia, and Latin America, escaping crop failure, water scarcity, and sea-level rise, according to the World Bank projections.

The Intergovernmental Panel on Climate Change (IPCC), the main U.N. authority on climate science, has reiterated that the changes brought on by the climate crisis will influence migration patterns.

“As for me, God-willing next week I’m heading to Niger to try to reach Algeria where my friends live and work in the construction sector,” says Harouna.

Future degradation of land used for agriculture and farming, the disruption of fragile ecosystems and the depletion of precious natural resources like fresh water will directly impact people’s lives and homes, according to Dina Ionesco, head of Migration, Environment and Climate Change Division at the U.N. International Organization for Migration (IOM).

Former FAO Director General José Graziano da Silva said back in February 2018 that the rehabilitation of degraded land was a priority for Burkina Faso.

The U.N. agency and other partners have been tasked to implement the Action Against Desertification (AAD), a programme meant to bring land restoration to scale.

But all of these interventions have come just a little too late for young men like Harouna.

“Put yourself in these young men’s shoes,” Harouna’s uncle, who asked not to be named, contributes to the conversation for the first time since the interview started. “What would you do if something like this happens to you? There are no jobs in this country, no peace, no opportunity for the youth and not even good politicians.”

“Just look around us now, the climate is challenging our land, the only source of our livelihoods. Terrorists are ruining our lives and our children’s future, and the only way out of this mess is to go elsewhere to look for a better life,” the uncle, who is sponsoring Harouna’s irregular migration to Algeria, tells IPS.