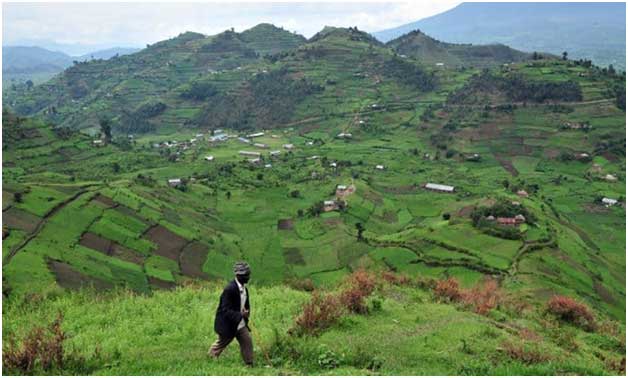 UNITED NATIONS, Nov 14 2019 (IPS) - When UN Secretary-General Antonio Guterres made a global appeal for “zero hunger” on World Food Day last month, he provided some grim statistics rich in irony: more than 820 million people do not have enough to eat, he said, while two billion people are overweight or obese.

“It is unacceptable that hunger is on the rise at a time when the world wastes more than one billion tonnes of food every year.”
Still, the United Nations is hoping for the eradication of extreme hunger by 2030 as part of its Sustainable Development Goals (SDGs).

How realistic is this? And can Artificial Intelligence (AI), touted as the new panacea for some of the world’s ills, help facilitate increased agricultural crops and farm output?

In a New York Times article titled “Harvesting Corn, Wheat and a Profit” October 13, Tim Gray points out that as the world’s population rises, from the current 7.6 billion to nearly 10 billion in 2050, the United Nations has estimated that 70 percent more food will be needed by then, but it will have to be produced on just five percent of arable land.

But AI, meanwhile, is on the move with farmers operating self-guided tractors guided by GPS navigation systems, drones being used to monitor crops, AI being employed in irrigation and robots likely to take cow hands’ jobs.

Asked if there is a role for AI in agriculture, Sonja Vermeulen, Director of Programs, CGIAR System Organization, told IPS: “Absolutely. CGIAR’s role in this is creating and scaling up affordable AI and big data solutions – so they are relevant and accessible to a wide diversity of farmers regardless of gender, culture, wealth or literacy.

For example, CGIAR (described as a global partnership that unites international organizations engaged in research for a food-secured future and formerly known as the Consultative Group for International Agricultural Research ) won former UN secretary-general Ban Ki Moon’s innovation prize for work using big data to better predict rice harvests from weather patterns so farmers can match planting places and times (and save a lot of money), she said.

Danielle Nierenberg, President, Food Tank, described as a think tank for food, told IPS while AI, Big Data, and other technologies can hold a lot of potential for farmers of all sizes, they are not a silver bullet for solving hunger.”

“The question we need to ask with all technologies is what problem are they trying to solve and who will they help?”

Unfortunately, she said, many high-tech innovations are not helping farmers who need it the most—the world’s small and medium sized farmers who produce much of the food on the globe.

Those farmers need to be part of the research and development of new technologies so that they actually solve the challenges those farmers face, she added.

And there needs to be an emphasis on combining “high” and “low” tech innovations and making sure that farmers indigenous and traditional knowledge is respected, said Nierenberg.

An article titled “Artificial Intelligence: What AI Can do for Smallholder Farmers” in the Food Tank website, says “Imagine one hundred years ago if farmers had access to huge volumes of information about the soil profile of their land, the varieties of crops they were growing, and even the fluctuations of their local climate?. This kind of information could have prevented an environmental crisis like the Dust Bowl of the 1920s in the American Midwest. But even ten years ago, the idea that farmers could have access to this kind of information was unrealistic.”

For the team behind the CGIAR Platform for Big Data in Agriculture, farming is the next frontier for using artificial intelligence (AI) to efficiently solve complex problems. The team—which includes biologists, agronomists, nutritionists, and policy analysts working with data scientists—is using Big Data tools to create AI systems that can predict the potential outcomes of future scenarios for farmers.

By leveraging massive amounts of data and using innovative computational analysis, the CGIAR Platform is working to help farmers increase their efficiency and reduce the risks that are inherent in farming, according to the article.

Asked for her comments, Ruth Richardson, Executive Director, Global Alliance for the Future of Food, told IPS: “When it comes to the future of food in the climate emergency, we need to go beyond just looking to “technology” as a silver bullet solution. Instead, we need to broaden the discussion to be about wider food system transformation and interrogate whether technology is the end or a means to an end?”

After all, she said, some farmers operate using advanced technology but many globally are still reliant on small scale operations and tools. It’s important to also note that technology and innovation, more broadly, are important tools to achieve sustainable food systems but technology itself – especially the access to it — is not neutral.

Richardson pointed out that one of the biggest challenges related to technology is related to governance.

“A concentration of power and highly unequal power relations are a deep problem in today’s broken food system so we need to ensure that technology and its implementation is managed in a way that promotes equity and environmental sustainability. Any developments need to be assessed holistically with a focus on risks and trade-offs,” she declared.

Anuradha Mittal, Executive Director at the San Francisco-based Oakland Institute, told IPS today nearly 800 million people are hungry and this number is expected to grow, despite grand declarations by the governments at UN summits.

“But we already produce enough food to feed at least 10 billion people (the current population is around 7.6 billion). It is therefore essential to understand the true causes of hunger—when there is no shortage of food.”

Focus on technology driven industrial agricultural system as a solution to hunger, has created a food system that is upside down and backwards. Denying family farmers their basic rights to land, seeds, markets, and food sovereignty has rendered food producers hungry, argued Mittal.

And yet, she pointed out, farmer suicides continue to dominate newspaper headlines nationally while the country is home to the largest number of hungry people in the world. In 2017 Global Hunger Index, India ranked 100 out of 119 ranked countries.

The last Intergovernmental Panel on Climate Change (IPCC) report focused on climate change and land, makes it clear that fixing our food system is imperative. Industrial food production has led to increased greenhouse gas emissions; monopoly of a few corporations over seeds to chemical inputs; monoculture production which threatens biodiversity globally; and more.

“This has made our agricultural system both a major driver of climate change—and majorly vulnerable to its effects.”.

“Instead of seeing artificial intelligence as the next silver bullet solution to hunger, we need a food system that respects and protects the intelligence of family farmers, traditional knowledge and agroecological principles of farming,” declared Mittal..