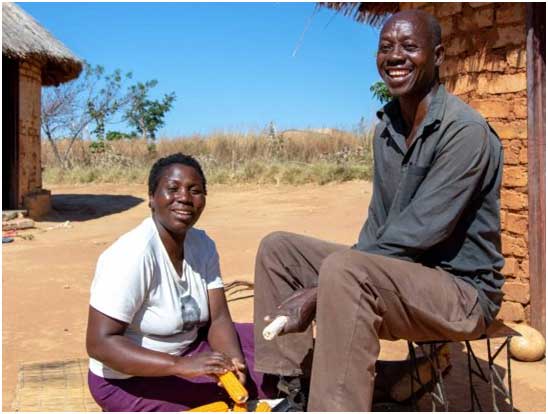 HARARE, Zimbabwe, Jan 27 2020 (IPS) - Steven Seremwe, who is 57 years old, was retrenched from his job as an administrator at Lake Shore Missions in 2012. He decided to focus on farming, and he started growing various crops—white maize, sugar beans, and sweet potatoes, among others—for consumption and sale.

“I have always loved agriculture but because of work pressures, I was not practicing. But when I got retrenched from work, I decided to follow my heart and started farming,” he said.

The problem was that every farming season, even with a bumper harvest, Seremwe`s income was falling short. Profits were never enough to feed and care for his wife and two children. He had to do odd jobs in the community to help make ends meet.

Seremwe lives in Zvimba District of Mashonaland West Province in Zimbabwe. According to a National Nutrition Survey conducted in 2010, Zvimba was among 27 districts in Zimbabwe that were identified as having a high prevalence of malnutrition.

The irony is that in Seremwe’s district, many types of crops and vegetables are grown, but most are grown for sale rather than for consumption.

In 2016, under the Zimbabwe Livelihoods and Food Security Programme (LFSP), HarvestPlus introduced biofortification in Zvimba district.

The programme, which is funded by the Government of the United Kingdom through the Department for International Development (DfID), aims to reduce poverty through increased agricultural productivity, increased incomes, and improved food and nutrition security for smallholder farmers.

To improve nutrition and health, the LFSP aims to increase the production and consumption of a wide variety of nutritious foods by target households, including biofortified crops.

Encouraged by staff from HarvestPlus and the Agricultural Technical and Extension Services (part of the Zimbabwe Ministry of Lands, Agriculture, Water, Climate and Rural Resettlement), Seremwe joined in the LFSP, hoping that the new crops would help boost his family’s income and secure better and healthy living conditions.

After attending several biofortification trainings organized by the project, Seremwe applied the techniques that he had learned, such as mulching, weeding, and application of manure in his field.

After cultivating these crops for the first time, Seremwe saw their potential and was motivated to expand output. During the 2018/19 farming season, he purchased 10 kilograms (kgs) of vitamin A orange maize seed, which yielded 1 ton of maize grain.

Seremwe has also become an ambassador of biofortification—to date, he has passed on 10 kgs of iron bean seed to other farmers to plant. “My family loves eating vitamin A orange maize, especially porridge, it is really tasty. The iron beans also are fast cooking. Above all, as a family we appreciate the health benefits we are getting from eating these biofortified crops. As you can see, we all look very healthy!” Seremwe said.

Seremwe`s fields now yield produce that brings greater prosperity and opportunity to his family. “Vitamin A orange maize and iron beans are an excellent add to our crops that we grow here. Now we have crops loved by many for sale. This contributes significantly to improving the living conditions of my family and education for my children,” he added.

In the current 2019/20 agricultural season, Seremwe—as a farmer who was taught by the project on preparedness—has already bought his farming inputs, including vitamin A orange maize seed, iron beans, and some fertilizers. He has already done his land preparation and is only waiting for the rains to come.

Seremwe is one of roughly 250 000 farmers who have benefitted from the UK-funded LFSP project to end micronutrient deficiencies in the country. The project also supports farmers with market linkages.

Through the program’s interventions, a cumulative 259 metric tons (MT) of vitamin A maize seed and 400 MT of iron bean seed have been distributed in the country through a combination of direct distribution and market-led inventions.

One of the pillars under the framework will be driving food and nutrition security and resilience.

*HarvestPlus is developing and promoting new, more nutritious varieties of staple food crops with higher amounts of vitamin A, iron or zinc—three of the micronutrients identified by the World Health Organization as most lacking in diets globally. The process is known as biofortification—and regular consumption of these innovative crops is improving nutrition and public health.