UNITED NATIONS, Jan 28 2020 (IPS) - Increasingly, the ability of multilateralism to address contemporary global issues such as climate change and international trade is being questioned. In the case of international trade, WTO Members have thus far not been able to conclude the Doha Round, which was launched in November 2001. The Round was supposed to have been concluded on 1 January 2005, but it has been beset by persistent differences among the WTO Members. Whereas most developing countries believe that the Round is still active and have called for the fulfilment of all Doha mandates, several developed countries are of the view that the Round has run its full course and overtaken by developments in the global economy. They note that three out of the ten top economies in the world are developing countries – Brazil, China and India – and that several developing economies are also competitive in certain sectors of the global economy and that by granting significant flexibilities in the negotiations to these competitive developing economies, the Round’s mandates are no longer valid and that differentiation among developing countries should be part of the broader on-going discussion on WTO reform.

The stalemate in the Doha negotiations has prompted countries to look at alternative ways to liberalize trade and investment for the benefit of their businesses and consumers, including negotiating plurilateral agreements at the WTO among a subset of WTO Members and negotiating bilateral and regional trade agreements. In the last five years, concluded bilateral and regional trade agreements include the United States-Mexico and Canada Free Trade Agreement, the Comprehensive Economic and Trade Agreement between the European Union and Canada, the Comprehensive and Progressive Agreement for Trans-Pacific Partnership between eleven Pacific-rim countries, including Australia, Canada and Japan, the Pacific Agreement on Closer Economic RelationsPlus between Australia, New Zealand and the fourteen Pacific Island Countries and European Union and MERCOSUR Free Trade Agreement. The scope of these agreements goes beyond the current WTO Agreement and addresses issues of importance to businesses such as electronic commerce, competition policy and investment as well as labour rights and the protection of the environment.

African countries have also not been idle and have recently concluded the African Continental Free Trade Agreement (AfCFTA), which is expected to create a market of 1.2 billion people with a gross domestic product of USD2.5 trillion. The United Nations Economic Commission for Africa estimates that trade among African countries, which is currently around 15 per cent, can easily be doubled if the current overall average tariffs of 6.1 per cent are eliminated. The figure is projected to be even higher if the removal of tariffs is accompanied by the elimination of non-tariff barriers on intra-African trade. With Africa’s population expected to exceed 2 billion by 2050, it is envisaged that it would be a magnet for foreign direct investment by leading multinational companies. The World Economic Forum estimates that the AfCFTA will generate USD4 trillion for investments and commercial transactions of goods and services on the continent. 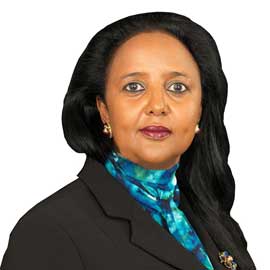 Notwithstanding the immense opportunities the AfCFTA will bring to the African continent, African countries should not turn their backs on the rules-based multilateral trading system, which has contributed significantly to the expansion of the global economy and in the process lifted several millions of people out of absolute poverty. Between 1948 and 2019, world trade grew from USD58.5 billion to almost USD20 trillion and it is estimated that more than 700 million people have been lifted out of absolute poverty with much of that happening in China and India. African countries should show determination and work closely with the leading WTOMembers, including the United States, the European Union, China, Brazil and India to strengthen the organization for the benefit of all countries, particularly African and least developed countries which have been operating at theperiphery of the multilateral trading system.

There is agreement among all WTO Members that the WTO Agreement needs updating considering that the current Agreement entered into force in January 1995. So much has happened in the intervening period and WTO rules need to reflect contemporary trends in the global economy if it is to remain relevant. The task of reforming the WTO should not be left to a few countries. All countries have a stake in a well-functioning multilateral trading system and collective engagement will ensure that all spectrums of views are considered in the design and implementation of new and effective multilateral trade rules. The benefits from the AfCFTA would be far greater if alongside regional liberalization, there is also multilateral liberalization, especially considering that Africa’s largest trading partners are the European Union, China and the United States. The two approaches to liberalization are not mutually exclusive and can complement each other as various studies have shown. African countries need not make a choice between the two approaches and should pursue both doggedly to achieve robust economic growth and sustainable development.

The world needs a reinforced rules-based multilateral trading system more than ever to confront the challenges of the 21stcentury. Bilateral and regional trade agreements cannot be a perfect substitute for the rules-based multilateral trading system, as issues such as trade distorting domestic support to the agriculture sector can only be effectively addressed at the multilateral level. These agreements, including the AfCFTA also tend to rely heavily on the WTO framework in many areas, including health and food safety and trade remedies. All WTO Members should work together to preserve and strengthen this public good. Compromises will have to be made and the overarching reason why countries join the WTO in the first place should not be lost on them. Every country that is a WTO Member acknowledges the role trade can play in their national economies in creating jobs, attracting foreign direct investment and lifting standards of living. Protectionism imposes significant costs and countries should avoid going down that path. African countries have a role to play in breaking the impasse at the WTO and they should work intensively with other WTO Members to reform and strengthen the institution and the rules-based multilateral trading system, while they commence implementing the AfCFTA to boost trade and investment on the continent.

The writer is a Cabinet Secretary, Government of Kenya. She served until recently as Kenya’s Foreign Affairs Minister in charge also of international trade. She has occupied several top positions at the World Trade Organization, including as Chairperson of the General Council and the Nairobi Ministerial Conference in 2015.