However, it will be exporting fossil fuels to meet growing Asian demand for the foreseeable future 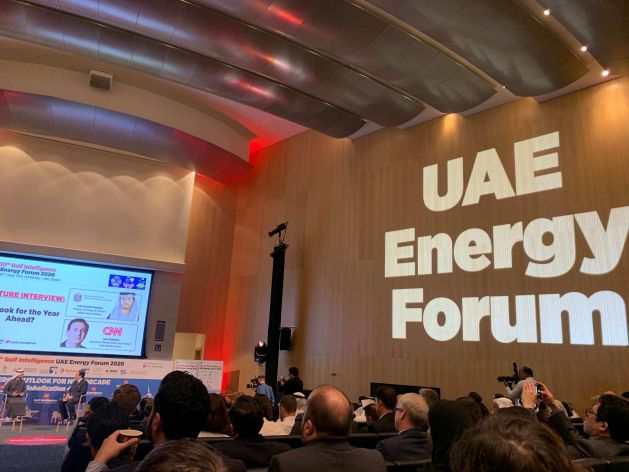 In January alone, the United Arab Emirates (UAE) hosted the Gulf Intelligence UAE Energy Forum, the World Future Energy Summit, the Abu Dhabi Sustainability Week and a Future Sustainability Summit. February onwards, Dubai will have the International Conference on Renewable and Sustainable Energy, International Conference on Green Energy and Environmental Technology, with a Green Week and a Congress on Biofuels and Bioenergy later this year.

The UAE is the world’s 7th largest exporter of crude oil, with 5.5% of market share, but is promoting itself as a low-carbon country. Masdar City, a model for sustainable urban living is coming up outside Abu Dhabi which is designed by Foster and Partners architects.

A 10MW solar farm outside the city provides solar power for the office buildings, which includes the regional headquarters of Siemens and IRENA (the International Renewable Energy Agency). Oil industry conclaves that used to focus on global price trends, prospecting and new oil fields now have plenary panels on solar and wind.

“We are serious about energy security, and we have a strategy for an energy mix that includes renewables,” said Suhail bin Mohammed Faraj Faris Al Mazrouei, UAE Minister of Energy and Industry at the opening of the UAE Energy Forum earlier this month. That decarbonisation plan would mean the country by 2050 will be producing 38% of its energy from gas, 44% from renewables, 6% from nuclear and the use of clean coal will drop to 12%.

In the rest of the oil-rich Gulf region, petroleum-based energy will drop from the current 91% to 41%, and renewables will go up from 9% today to 59% .

Of the UAE’s 10 million population, 90% are expatriates and the country’s per capita carbon footprint is 23 tons per year. Although a low carbon trajectory would reduce total emissions, the UAE will remain a major exporter of fossil fuels into the future.

Even so, the writing was on the wall in Abu Dhabi throughout January – conference delegates felt there is no option but to move from oil to more a more efficient fossil fuel like gas, and promote utility scale solar and wind.

This year, Oman is commissioning a 100MW solar farm. Saudi Arabia is turning into ‘Solar Arabia’ by integrating Concentrated Solar Power (CSP) with its existing thermal plants to generate nearly 2GW. It is adding 300MW solar photovoltaic and a 400MW wind project, and is thinking big: generate 200GW of solar power by 2030. 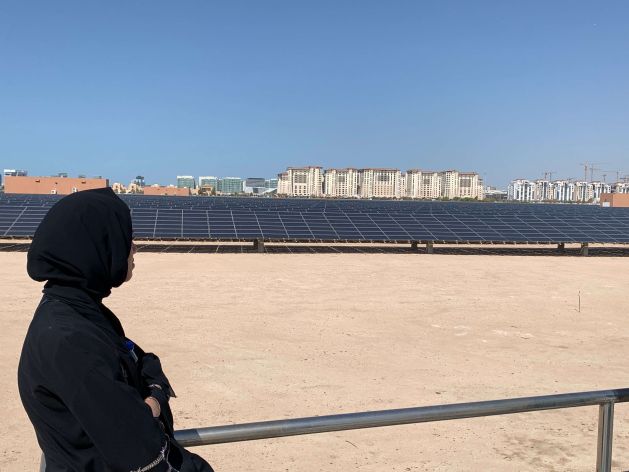 The UAE itself is aiming to cut CO2 emissions by 70% with Dubai installing the largest single-site solar park in the world to produce 1,000MW, which will be upgraded to 5,000MW in the next ten years. Another CSP plant will generate electricity 700MW even after dark with molten salt storage. Elsewhere, solar plants balance the fluctuation in generation by pumping water to hydropower dams, releasing the water through turbines at night.

“However much we shift to renewables from transportation or electricity, we will still have to rely on oil and gas because we have to balance the baseload at night,” explains Jan Zschommler of the DNV GL, the Norway-based sustainability consultant group.

Projections show that although oil will supply 17% of the energy around the world in 2050, petroleum gas will be the primary energy source from the mid-2020s and in the next 20 years there will be a shift to non-fossil biogas.

The cost of solar photovoltaic panels has dropped by more than 90% in the past ten years, and the price of lithium ion batteries have dropped by 80% and onshore wind turbines by 75% in the same period. By 2025, it will be cheaper to build and run electric cars than a petrol vehicle.

However, even if half of all the cars in the world are electric, the demand of oil and gas will grow into the near future. Says Nobuo Tanaka of the Sasakawa Peace Foundation: “Peak oil will not happen before 2040 because even if light vehicles go electric there will be increased demand from aviation, ships and trucks as well as the petrochemical industry. That may be good news for the Middle East, but it’s bad news for the planet.”