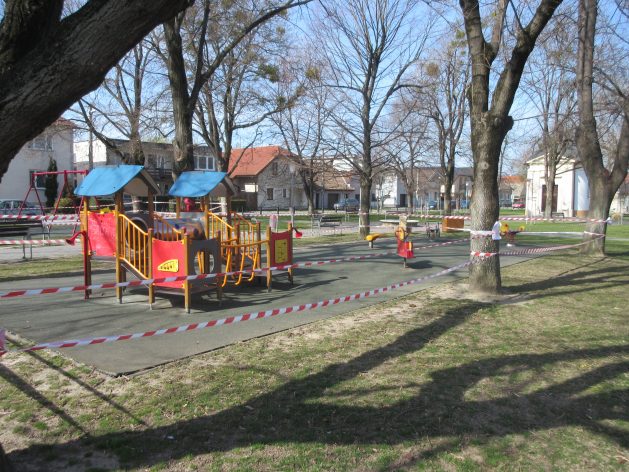 This playground just outside the Slovak capital, Bratislava, has been sealed off to stop people spreading the virus. Similar measures are in place in cities and towns across Europe, which is now the epicentre of the virus's spread. Credit: Ed Holt/IPS

BRASTISLAVA , Mar 16 2020 (IPS) - Governments in wealthy, first world countries must not ignore the plight of poorer nations battling the coronavirus or the disease will not be brought under control, global development experts have said.

As African nations slowly report growing numbers of cases, and more and more infections are registered in countries with endemic poverty on other continents, there are growing fears that some states could soon see major outbreaks they will not be able to cope with.

A potential paralysation of already vulnerable healthcare systems would not only have a drastic impact on population health, but could also push people further into poverty and deprivation, World Health Organisation (WHO) officials have told IPS.

To avoid such a scenario, rich states must keep a focus on helping other countries with weak healthcare systems, despite the fact they are fighting their own battle with the disease, say experts.

“High income countries are completely consumed with what is happening in their own states, but it would be good if they could give at least some focus to poorer countries,” Amanda Glassman, executive vice president of the Washington-based Global Centre for Development think-tank, told IPS.

The past week saw an unprecedented shutdown of Europe and the United States, with widespread school, restaurant, cinema and museum closures. Several countries across Europe have closed their borders, with Germany being the latest to shutdown all non-essential travel.

While the vast majority of cases have been in China, where the virus was first detected, with Italy being the country with the second-highest most cases, followed by Iran, South Korea and Spain. Europe is now the epicentre of the pandemic.

Significant infections have been recorded in the United States and some other Asian countries, and the Philippines capital of Manila has been sealed off.

But while there have been far fewer registered cases of the disease in places like Africa and South America, many health experts believe that those numbers could very quickly rise dramatically.

Healthcare systems in many poor countries, especially in Africa, are already severely stretched with limited financing and resources. Access to hospitals, and especially intensive care units, are generally much lower than in developed nations – studies have estimated that less than half of Africa’s population has access to modern health facilities.

“Sub-Saharan Africa is already struggling with the Ebola virus and the locust invasion and associated famines. It now faces a third war against the coronavirus. In many countries, resources are stretched thin,” international policy expert and found of the Difference Group advisory organisation, Dr. Dan Steinbock, told IPS.

Any major COVID-19 outbreak could affect incidence, and treatment of, other diseases in some African states, Dr Ambrose Talisuna, Programme Manager for Emergency Preparedness, at the WHO Regional Office for Africa, told IPS.

“We fear that the healthcare systems in some African countries could be completely paralysed.

“We saw this with Ebola [outbreaks in some African countries]. There was a diversion of resources to the disease and the healthcare system couldn’t deal with the shock of the outbreak. People died of malaria, people couldn’t get treatment for tuberculosis,” he said.

Even countries with relatively developed healthcare systems could face similar problems. South Africa has the world’s worst HIV/AIDS epidemic and it is not known how a major coronavirus outbreak may affect treatment for those with HIV/AIDS or outcomes if they are infected with COVID-19.

“We don’t know what might happen with issues relating to COVID-19 infections and other conditions, such as HIV/AIDS,” said Glassman.

In Latin America, where more than two thirds of people live in extreme poverty, doctors have already warned of the strain widespread coronavirus infections could put on hospitals and health workers.

Writing in the the Folha de São Paulo newspaper last week, Drauzio Varella said: “…. depending on the speed with which the epidemic spreads, the stress on our health system could be brutal.”

There would also be serious economic problems. Not only would massive financial resources have to go into healthcare rapidly, but measures implemented to contain the virus’s spread, such as travel restrictions, business closures, quarantines, would very soon affect people’s incomes.

“As we saw with Ebola, there can be a massive effect on the local economy and people’s income. If people cannot travel because of restrictions and cannot do ‘petty trade’, which is what some rely on to survive, then they will have nothing,” said Talisuna.

One potential advantage some less developed countries may have in dealing with an initial outbreak is their experience with other deadly infectious diseases.

In the Democratic Republic of Congo, a devastating Ebola outbreak has just been brought under control. Talisuna pointed out that checks for COVID-19 could simply be added to existing screening on entry into the country which was set up because of the Ebola outbreak.

“Prevention measures and training of healthcare staff could just be refreshed, so people that were used in Ebola prevention could be trained up quickly to deal with the coronavirus. The response can be scaled up quickly,” he said.

Many countries, including some of the poorest in the world in Asia, Latin America and Africa, have begun introducing strict measures to try and halt the spread of the disease. These have included closing borders and mandatory quarantine.

While the WHO has supported the use of such measures, they have been shown to have had an enormous economic toll with sectors such as travel, transportation, tourism and retail, among others, all seriously affected.

They are, however, necessary, some argue.

“The draconian measures that China opted for have been very costly. But all alternatives would have been much worse. Chinese leadership had to choose between extensive economic damage in one to two quarters with probable virus containment, or far greater economic devastation coupled with drastic increases in cases and deaths,” said Steinbock.

But the costs cannot, and should not, be borne by developing nations alone, development experts say.

While local governments can help businesses and individuals with measures such as tax relief, providing financial support through loans, and exemptions from health and social security payments, other countries have a role to play, they argue.

Earlier this month, the World Bank made $12 billion available in immediate support to help countries coping with the health and economic impacts of the global outbreak. The International Monetary Fund has said $10 billion could be mobilised in loans to low-income countries tackling the virus. On Mar. 13 WHO and its partners launched the COVID-19 Solidarity Response Fund which aims to raise funds from private and corporate individuals to contribute to global response efforts.

Meanwhile, other money is being redirected from existing funding: for example the Global Fund for HIV, TB and malaria is to allow some funds to be used for the virus response while the United Nations’ Central Emergency Response Fund global emergency response fund has made $15 million available.

More could be done though, Glassman said. “Multilateral investment banks need to boost their current lending,” she said.

Steinbock added: “Over a month ago, WHO chief Tedros Adhanom Ghebreyesus launched a $675 million preparedness plan hoping to contain the crisis and pave the way to deter future crises. That’s less than 1percent of the U.S. 2020 military budget. In late February, the European Commission earmarked $124 million for the WHO response plan, [but] other actors have not proved as generous.”

Individual countries have pledged contributions to global efforts to fight the disease, either directly to other states and health groups, through multilateral organisations, or to the WHO.

No matter how it is funded, experts agree that developing countries must be given whatever help is needed to contain the disease.

“If cases escape detection [in poor countries], then it is more likely than not that weak healthcare systems, coupled with endemic poverty and social instability could result in a secondary epidemic with potential global impact.