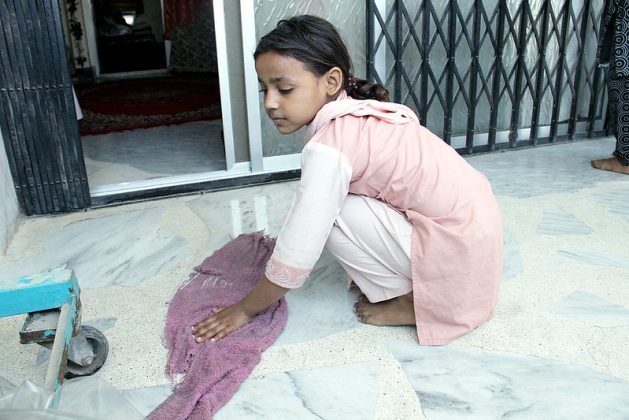 A Pakistani child domestic worker in this dated photo. The Asia Pacific region has one of the highest number of people in modern slavery, but the growing awareness of modern slavery in the region has led to the implementation of legislations to combat it.Credit: Fahim Siddiqi /IPS

SYDNEY, Australia, May 15 2020 (IPS) - Aged 17, Moe Turaga was saddled with the responsibility of providing for his mother and young siblings when a family member approached him with the promise of a job and education in Australia. Dreaming of a bright future for himself and his family, he seized the opportunity and left the protective confines of his home in Fiji, only to find himself trapped in modern slavery on a remote agriculture farm in the state of Victoria.

Turaga was one of 12 cousins, forced to work long hours in abysmal conditions. He told IPS, “We had implicit faith in this man as he was family and a church minister. We kept loyal for years because we were told that our wages were being used to feed our family and send our siblings to school. It was 1988, we didn’t have mobiles or access to social media. All our identity documents had been confiscated by this man so we were completely isolated.”

He learnt that none of his wages had been sent home after two years of forced labour. Eventually, a farmer employed him and helped him escape. “This gut-wrenching experience of being exploited to the hilt will always be a part of my life. I want to encourage more people to tell their stories, so somebody can see the light and be freed. I am now an advocate for modern slavery, which is rife in Australia,” said Turaga from his home in central Queensland, where he now lives with his family. 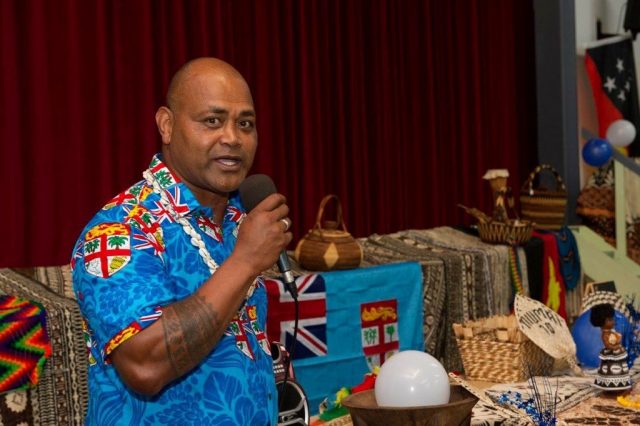 Moe Turaga found himself trapped in modern slavery on a remote agriculture farm in the state of Victoria, Australia at the age of 17. Courtesy: Moe Turaga

On any given day in 2016, 15,000 people in Australia and 3,000 people in New Zealand were in situations of modern slavery, according to the 2018 Global Slavery Index, Walk Free’s flagship dataset which is the only country-by-country estimate of the extent and risk of global slavery.

Australia is primarily a destination country for people trafficking and modern slavery. “Traditionally, Australia has offered higher minimum wages and greater employment opportunities than some other countries in the Asia-Pacific so there is a sense that there is greater opportunity to make a living here,” Justine Nolan, Professor in the Faculty of Law at University of New South Wales in Sydney, told IPS.

“Modern slavery may take the form of forced labour – where workers have paid high recruitment fees for the job, or they may be forced to work excess hours, be underpaid or not paid for that work,” Nolan added.

In most cases, the trafficked people know their trafficker and the latter is able to exploit their trust to deceive them. Ashish Kumar, who hails from the poor Manjhi community in the eastern Indian state of Bihar, was 14 years old when an agent from a nearby village approached him and six other boys, aged between 10 and 14 years, with an offer of a good job and schooling in a city. The agent paid 2000 Rupees (about $26) to each boy’s parent. He brought them to Jaipur in Rajasthan and locked them in a small room with six other children, who were already there.

“For six months, 13 of us lived and worked from early morning till midnight in that room. The windows and doors were shut at all times and we were allowed only short toilet breaks and given limited food twice a day. We were made to grind glass stones and then stick the stone embellishments and beads on lac bangles. The dust from stone grinding made it difficult to breathe and we are still suffering from respiratory illnesses,” Ashish told IPS via Whats App from Samod Bigha village in Gaya district. 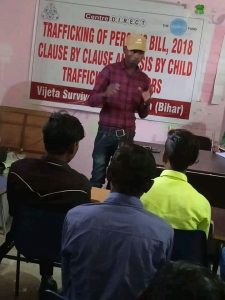 Ashish Kumar, who hails from the poor Manjhi community in the eastern Indian state of Bihar, was 14 years old when an agent from a nearby village approached him and six other boys, aged between 10 and 14 years, with an offer of a good job and schooling in a city. It turned out to be modern slavery. Courtesy: Ashish Kumar

“If we protested or asked to go home, we were thrashed and threatened with death. One day the trafficker sent one of his village boys, whom he trusted, to buy ration. The boy instead went to the nearby police station and complained. The cops raided our room and rescued us,” added Ashish, who is amongst a small number of children who are fortunate to be freed from bonded labour.

The Global Sustainability Network ( GSN ), which actively supports the United Nation’s Sustainable Development Goal 8 of decent work and economic growth, has focused much of its work on eliminating modern slavery and child labour.

Ashish’s trafficker was last year awarded life imprisonment for exploiting child labour in a landmark judgment by a Jaipur court. The boys still have nightmares and fear for their safety as only three months ago, their families were threatened by the trafficker’s extended family, demanding that the boys change their testimony in court.

These boys are being supported and rehabilitated by The Freedom Fund, a global charity dedicated to end trafficking. The fund, along with its grassroots partner Centre DIRECT, has helped set up the Vijeta Survivors Group of rescued children in Bihar, one of the collectives in the Indian Leaders Forum against Trafficking (ILFAT).

Ashish, who is the leader of the group which currently has 50 survivors told IPS, “We are very concerned about children still being exploited in workshops. Their misery has been compounded by the COVID-19 lockdown.”

The Asia Pacific region has one of the highest number of people in modern slavery, but the growing awareness of this practise in the region has led to the implementation of legislations to combat it. For example, Australia’s Modern Slavery Act 2018 requires entities based, or operating, in Australia, which have an annual consolidated revenue of more than AU$100 million, to report annually on the risks of modern slavery in their operations and supply chains, and actions taken to address those risks.

As Executive Manager of the Catholic Archdiocese of Sydney’s Anti-Slavery Taskforce, Jenny Stanger told IPS, “The supply chains of Australian businesses are spread across the Asia Pacific region. So Australia has an opportunity here to be a leader in advocating for and bringing visibility to workers’ rights in the region, where workers’ rights and justice for workers is a real challenge, and to drive the human rights agenda through business. This includes improving rights and access to justice for migrant workers right here in Australia.”

The new Australian Catholic Anti-Slavery Network (ACAN) is a collaboration of 45 large Catholic health, education, financial and community service entities implementing a Modern Slavery Risk Management Programme within the supply chains and operations of their organisations.

“In Australia, Temporary Visa holders and undocumented people are the most vulnerable. Fruit picking and packing are jobs that many Australians don’t want to do. Those jobs are in rural, regional and remote areas and it is really hard work.

“Most farmers are reliant on temporary and seasonal labour to get their products to the market. There are 60,000 to 100,000 people in agriculture alone, who don’t have permission to be in Australia or those whose visa has expired are very much at risk of exploitation or becoming trapped in slavery like conditions,” Stanger added.

Modern slavery is a lucrative business, generating more than $150 billion a year, according to ILO. Legislation alone is no silver bullet. Research shows significant legal loopholes and gaps in enforcement remain. Technology, such as Apps, big data, artificial intelligence and blockchain, is coming to the aid in combatting human trafficking and modern day slavery.

“The gathering of global data can help authorities to identify causes and patterns. As many as 147 nations having agreed to map practices and count the victims of modern slavery. Even satellite images can be used to identify modern slavery hotspots in industries, such as brick kilns, illegal mining and fish processing.

“The World Wildlife Fund is working with technology partners and a tuna fishing company to use blockchain technology to track tuna from “bait to plate”. Digital tools, including SMS and social media can be used to better engage workers in supply chains and enable them to provide anonymous input on their working conditions,” Nolan told IPS.