The progress on ending extreme poverty, preventable child deaths, gender equality and climate change was too hard won to be side-lined 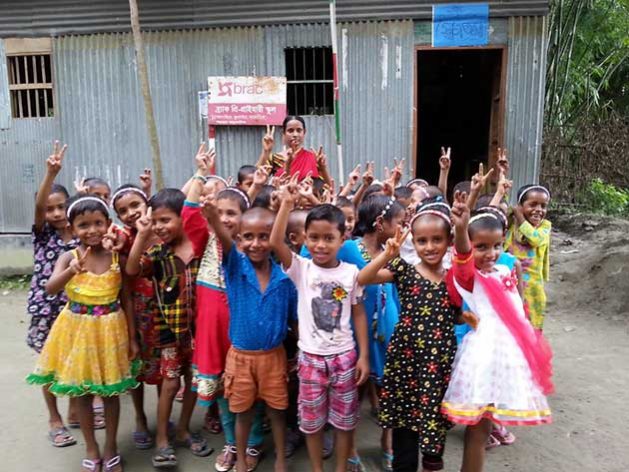 Poor families can seldom afford the cost of private pre-schooling. They rely on free education provided by NGOs like BRAC to give their children a leg-up in life. Credit: Mahmuddun Rashed Manik / IPS

DHAKA, Bangladesh, Jun 25 2020 (IPS) - Nazia has a herd of 5 cows. She has two daughters in secondary education, a seat on the Village Council, a savings account and a permanent home. Nazia has dignity, security and prospects beyond poverty. This is Nazia’s story because alongside her commitment and conviction to create a better life, she benefited directly from the UK government, and its global leadership in the drive to end extreme poverty.

Nazia is no longer Left Behind. And neither are millions of fellow Bangladeshis, previously struggling to survive, far below the international poverty line. Over the last two decades, the UK government, in partnership with BRAC, one of the world’s foremost NGOs, has directly enabled over 2 million of the very poorest families on the planet to graduate from poverty. And for the long-term; 97% of households continue to show dramatically improved lives and livelihoods 5-7 years after they leave poverty. We are immensely proud of this innovative, impactful Partnership – which delivers equally for the UK taxpayer and the poorest families across Bangladesh.

In fact, this ‘Ultra Poor Graduation’ approach is, this week, receiving the Audacious Award, and over 60 million USD, in recognition of its truly transformative potential. Without support from the UK government, with their laser-like focus on impact, appetite for innovation and determination to Leave No one Behind, there would be no Audacious Award for this Initiative. In fact, without support from the UK government, BRAC wouldn’t have the audacious ambition of reaching out beyond Bangladesh, to millions more of the world’s poorest people.

Much has been written in recent days on the merger of the Department for International Development (DFID) and the Foreign Office. Undoubtedly, an independent DFID has delivered. Generation-changing impact on the global issues that matter most. But the new Foreign Commonwealth and Development Office (FCDO) can too. It must. The progress on ending extreme poverty, preventable child deaths, gender equality and climate change, as well as DFID’s world-class reputation on these issues, was too hard won to be side-lined. As an organisation born in the Global South and one of the UK government’s largest development partners, BRAC has seen first-hand the ability of UK Aid to make transformative change.

We choose to believe that the UK government takes incredibly seriously, and won’t consider reneging on, its commitment to Agenda 2030. We choose to believe that this merger could result in greater impact on poverty, combining the best of DFID and FCO expertise, ideals and standards to reaffirm, rather than reduce, the UK government’s contribution to the international community.

In announcing the creation of the new FCDO, the Prime Minister has continued to commit to 0.7% of GNI being used to drive development. The need to invest this budget – which, as a result of global recession, will be significantly less than in recent years – with a focus on impact, value for money and the most vulnerable, is more important than ever before. DFID has rigorous analysis of the ‘best buys’ for development. The new FCDO should trust the evidence, embrace the expertise and lean into the legacy of the UK government as a world-leader in saving, and changing, the lives of the world’s poorest people. Supporting the governments and communities of the Global South to enable families to survive, and thrive, should always be a central, and celebrated, component of the UK’s international leadership.

The COVID-19 crisis represents a moment of reckoning for our shared global commitment to ‘Leave No one Behind’. It also represents the perfect opportunity – and responsibility – for the new FCDO to prove its intent and impact in ‘Building Back Better’ with a priority on the poorest. The international community – both government and civil society – will expect, and require, no less, in line with DFID’s track record, and the true ideals of ‘Global Britain’.

This story was originally published by Thomson Reuters Foundation.