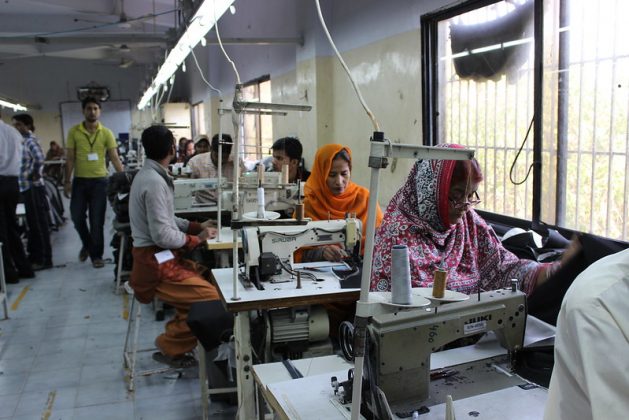 The textile industry in Pakistan, the largest manufacturing industry in the country, had been producing at full capacity this February. Prior to the worldwide coronavirus lockdown the government had lifted taxes and duties on the import of cotton. Currently thousands of garment and textile workers have been laid off and factory production has almost halted. Credit: Zofeen Ebrahim/IPS

UNITED NATIONS, Jul 2 2020 (IPS) - Unless there is a restructuring of debt for developing countries, the servicing for this debt will take away valuable resources from these nations that are needed to prevent the further suffering of people during the coronavirus pandemic — particularly with regards to safeguarding the health systems, and protecting the “integrity and resilience of economies”.

This is according to Bogolo Joy Kenewendo, former minister of trade of Botswana, who was speaking to IPS on Wednesday, Jul. 1, after a roundtable discussion at the United Nations over the post-lockdown economy.

In order to prevent economies of developing countries from suffering disproportionately under the current pandemic, it’s crucial that there’s less protectionist thinking and that developed countries approach the economic downturn through means that empower developing countries, said  Kenewendo, who is also a former member of the U.N. secretary-general’s high level digital cooperation panel.

“What’s important is that we have debt freeze and restructuring immediately, particularly for the developing countries because our resources are currently on so much pressure with the demand for social welfare to be extended, subsidies to be extended and then having some infrastructure needing to be put in place and paying interest on loans’.

“[This is] really putting a lot of pressure on the fiscal positions of many developing countries,” she told IPS.

At the roundtable titled “Rebirthing the Global Economy to deliver Sustainable Development”, numerous distinguished female leaders spoke on the issue, reiterating solutions that focused on how to accommodate the needs of developing countries.

Vera Songwe, executive secretary of the U.N. Economic Commission for Africa, shared an incisive analysis on the importance of removing intermediary parties from trade exchanges during the discussion.

She stated that one of United States tech company, Apple’s, main imports is cotton. However, 80 percent of cotton imports are from the Democratic Republic of the Congo (DRC), which is in a debt crisis.

“The DRC sells cotton at $40 – $80, [but] on the market cotton goes for $400,” she said, adding that one priority for the next steps should be to brainstorm ways in which intermediation can be reduced.

“My posit for trade and the new trade environment is that we do everything we can to take away every intermediary that exists between the original product and the end product,” she said.

She said this kind of debt is much longer term, claiming that advanced regions such as Europe and countries such as the United Kingdom, Canada, U.S. and Japan are living “beyond planetary impact”.

“We are destroying the climate system, we are destroying the ecological system, and that is the debt we owe to the lowest income countries of the world because we are undermining all prospects of development for them,” she said in an impassioned speech.

Kenewendo told IPS that this is also a matter of the “capital flight” to developed countries that takes place during a crisis.

“The real issue is that there’s a lot of [foreign direct investment] FDI that has been attracted to developing countries and emerging markets,” she said.

“And when there is such a crisis, you find this capital flight back to developed countries or to the west.”

This, she said, means the manufacturing income that developing economies had expected earnings from will suddenly be redirected to developed countries.

“And it’s mainly because during a crisis, people look at the political and economic stability of economies and it might be found that in Africa, for example, our political instability becomes a problem,” Kenewendo said.

These kinds of protectionist policies can really harm low-income or developing countries, and thus advocates suggest that not taking a “beggar thy neighbour” approach that only makes it less efficient.

“Those kind of ‘inward-looking’ policies make the situation more difficult for everybody and they deepen and prolong the crisis for the global economy,” Kenewendo said, adding that it’s crucial that free flow of capital is maintained and a trading relation is established rather than an aid-based relation.

She further noted the importance of digitalisation that the pandemic has highlighted and said it has a massive role to play in our economies going forward.

“Digitalisation is not all about being online, but it’s also about using the mobile technology resources that exist in order to ensure a much broader level of inclusivity in its delivery,” she said.

Citing Songwe’s example, Kenewendo said that in the conversation about reform, it’s key to ensure that “we are incentivising and stimulating investment”.

“It’s very important that we provide capacity for countries to tap into domestic capital and to also make sure that we’re safeguarding [small and medium-sized enterprises] SMEs and the resiliency of the informal sector,” she said.