KATHMANDU, Aug 31 2020 (IPS) - Even as Nepali workers stranded overseas face confusion and uncertainty during the Covid-19 crisis, labour reforms in Qatar – including an increase in the minimum wage announced in Doha on Sunday — may have lasting implications for migrants there.

On 30 August, Qatar revised the minimum wage to QAR 1,000 (USD 275), while requiring employers to ensure that they provide decent allowances for food and accommodation worth QAR 300 and QAR 500, if not directly provided.

In addition, workers are now allowed to change jobs before the end of their contract without obtaining a No Objection Certificate (NOC) from the employer. The reforms will also apply to domestic workers, who are currently excluded from the labour law.

“We have been raising this issue for a long time. The previous temporary minimum wage of QAR 750 was too low, so this is positive news for our workers and reflects the Government of Qatar’s commitment to bring reforms to the labour sector,” said Nepali Ambassador to Qatar Narad Nath Bharadwaj.

There had been much criticism of the NOC requirement that forced migrants to continue working even when there were contract violations, or they were not fit for the job or employer.

“This removes the culture of employers wielding a disproportionate bargaining power by not granting NOC to workers while making them work under unfavourable terms. If migrants have jobs of their choice, their morale will be higher,” Bharadwaj says.

Recruiting agencies often over-promise or lie about job offers abroad, forcing workers to be stuck in companies despite unfavourable employment terms. In other cases, employers release NOCs only if workers are willing to pay them, sometimes as high as QAR 5,000. 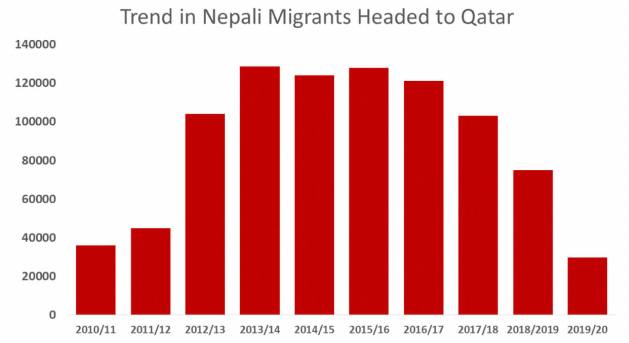 As international pressure started building up from migrants’ rights groups, in 2018 Qatar removed restrictions on workers to get exit permits from employers before leaving the country. According to the International Labour Organication (ILO), this ‘effectively dismantles the long-criticized Kafala system of employment’.

The minimum wage issue had been a sticking point for workers in Qatar, where there are over 350,000 Nepalis. Qatar is the first country with which Nepal signed a labour agreement in 2005, and has remained one of the most important destination countries for Nepali workers.

The Nepal government had unilaterally imposed a minimum referral wage for the ‘unskilled’ category of QAR 900 with QAR 300 for food allowance, ensuring that employers are unable to hire Nepali workers below this wage regardless of Qatar’s lower minimum wage.

As per this minimum referral wage requirement, all demand letters below QAR 900 used to be screened out by the Nepal Embassy during the approval phase. However, while many employers complied, there were also cases of employers and recruiters finding ways around this requirement via contract substitution. Once workers reach Qatar, they are made to sign another contract with a rate lower than the minimum referral wage.

Now, Qatar’s decision to raise the minimum wage for all workers means implementation will be more reliable via its Wage Protection System that monitors timely salary payment as per the contract and prevailing laws.

The Qatar government’s labour practices have been under international scrutiny ever since it won the bid to hold FIFA World Cup 2022. The pressure has led to some reforms over the years, although problems still prevail.

On 24 August Human Rights Watch issued a damning report on Qatar’s failure to follow through on promises of worker protection, pointing out the high incidence of withheld and unpaid salaries to workers in 60 companies. It said the situation had worsened as many employers used Covid-19 pandemic as a pretext to withhold or clear dues.

Ambassador Bhardwaj says, “Nepali workers affiliated with larger companies, including in many FIFA related projects are continuing work taking extra precautions. But there are Nepalis especially in the smaller companies impacted by the lockdown that have gone bankrupt, stopped paying wages, or cut staff size.”

Some 6,000 such workers have gone back to Kathmandu on repatriation flights, but there are 20,000 more who are waiting to return.

In June, Amnesty International also showed evidence of workers hired to build FIFA World Cup stadiums in Qatar not being paid for up to seven months last year.

There has also been international scrutiny in Malaysia, another country with large numbers of Nepali workers. Malaysia produces around two-thirds of the world’s latex gloves, and the US Custom Border Patrol issued detention order citing Malaysia’s labour violations in October last year.

Responding to the pressure, and amid soaring demand for personal protection equipment during the global pandemic, Malaysian companies have started reimbursing recruitment costs to workers, including Nepalis, while upgrading their living quarters, with stricter government oversight and social audits underway.