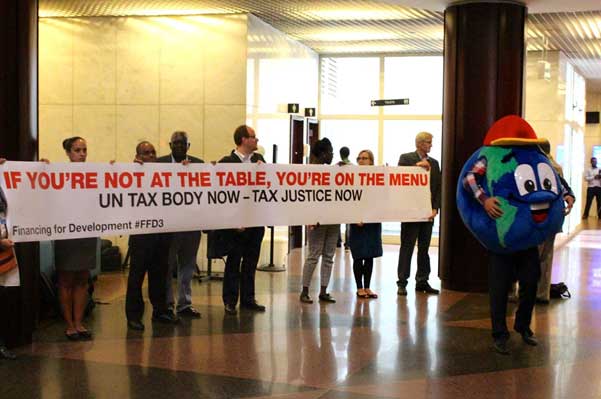 NEW YORK, Sep 28 2020 (IPS) - On 29 September, the world’s heads of state will come together (virtually) at an extraordinary meeting to discuss financing for development during the 75th UN general assembly. This will be crucial in the battle to address the Coronavirus crisis.

Our leaders will need to ask themselves this question: can we tackle a global recession while ensuring that basic human rights are protected, and the fight against poverty and environmental destruction are not completely run off the tracks?

The simple but harsh answer at this point in time, is that we cannot. The necessary global mechanisms and agreements are not in place, and unless governments urgently start working together to plug the gaps in the system, billions of people are likely to be heavily impacted by the Coronavirus crisis for years to come.

While the crisis is threatening up to half a billion people with poverty, the fortunes of the ultrawealthy are skyrocketing. Meanwhile, existing inequalities and discrimination, including those related to gender and race, are being reinforced by the Coronavirus crisis. National action is vital, but no country can address the global challenges alone.

Ahead of the heads of state meeting, a ‘menu of options’ for action has been published which includes key recommendations on debt, illicit financial flows, global liquidity and financial stability, among others. The heads of state must move from talk to action by agreeing to implement some of these recommendations and kickstart real intergovernmental negotiations to deliver new international frameworks and agreements.

At the top of the intergovernmental to-do list has to be debt resolution. The coronavirus crisis is creating a high risk of debt crises, especially in the Global South. And while the G20 response – to offer a standstill on bilateral debt to the poorest countries – has delayed the problem, it has done nothing to actually resolve it.

Even before the pandemic, there were clear warning signs that new debt crises were looming. This was alarming in light of the fact that we currently do not have an international mechanism to ensure that debt crises are resolved without undermining basic human rights of the people living in the impacted countries.

The good news is that the ‘menu of options’ includes concrete proposals for solutions, such as debt cancellations and an international UN debt workout mechanism. Now is high time for governments to get to work on these proposals.

Another top priority ought to be addressing tax havens, international tax dodging and other illicit financial flows. This problem has been causing a continuous bleeding of hundreds of billions of dollars annually from public budgets in both the Global North and South.

A core reason for this disaster is a deeply broken and outdated international corporate tax system. But here too, a clear and concrete proposal for a UN tax convention is part of the ‘menu of options’. Such a convention could pave the way towards new international tax and transparency rules to combat tax dodging. What is missing is an international alliance of progressive countries that can increase international pressure for progress and action.

A third, and related, top priority for governments should be to address the broader economic problems, which are exacerbating the impacts of the crisis. Governments ought to agree a date and preparation process for a crisis summit under the UN’s Financing for Development process, to be held at heads of state level as soon as practically possible.

The summit should follow up on previous commitments, which started with the Monterrey Consensus in 2002. Originally, governments had actually agreed to discuss a follow-up conference in 2019, but up to now have procrastinated and postponed the decision.

The sad reason for these delays is an old fight about control over economic decision-making processes. Countries in the Global South have been pushing for negotiations to start under the auspices of the UN, where all countries participate on an equal footing.

However, the countries in the Global North have blocked this and instead insisted that all decisions must be kept in opaque forums where they dominate the decision-making, including G20, IMF, the Paris Club and the OECD.

In 2014, when countries in the Global South wanted to start working on a UN debt resolution mechanism, constructive forces within the EU were drowned out by a small group of hardliners – and in particular the UK and Germany, and the EU ended up boycotting the process.

During a Financing for Development (FfD) summit in 2015 a group of countries in the Global North –with the UK and US in leading roles – put all their political muscle into blocking a proposal for a UN intergovernmental tax process put forward by the Global South countries.

This behavior has not only led to secret negotiations and unfair decisions that disregard the interests of the Global South, it has also led to a complete failure to develop effective solutions. By getting engulfed in a dirty fight to keep a large part of the world’s countries out of decision-making processes, many otherwise progressive European countries acted against the interests of their own people, including by increasing the influence of some of the most obstructive powers.

This includes the Trump administration, but also some of the OECD countries that are very aggressive tax havens. But the coronavirus crisis seems to be causing some governments to crawl out of the trenches, and the high-level meeting this month provide an important opportunity.

75 years ago, the UN was set up to “achieve international co-operation in solving international problems of an economic, social, cultural, or humanitarian character”. In reality, the UN became the place where global agreements on human rights, sustainable development, peace and environmental protection are negotiated.

However, on economic issues, power-hungry developed countries have blocked UN cooperation. Unless we find fair and effective solutions to address economic and financial crises, it will not only undermine all the other UN objectives and agreements. It will also make the coronavirus crisis much longer and more disastrous than it has to be.