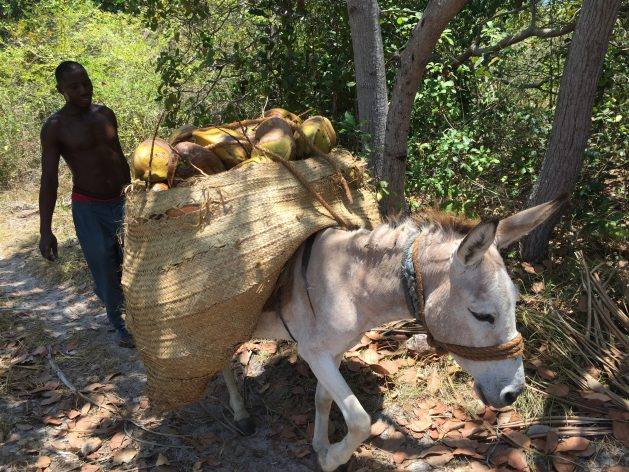 NEW YORK, Oct 14 2020 (IPS) - As we prepare to celebrate the 75th anniversary of the  Food and Agriculture Organization of the United Nations (FAO), it is time to recognise the role of working animals in livelihood systems, addressing climate change and in human health, which has been overlooked for too long. The Working Animal Alliance seeks to change this.

As we seek cost-effective and innovative solutions to help achieve the SDG’s, we would do well to recognise that working horses, donkeys and mules have been instrumental in the development and maintenance of civilization for millennia.

While they may be considered ‘old technology’ by some, they remain a versatile green power source. Not many people know that more than 100 million working animals continue to sustain the livelihoods of more than 600 million people, many of them at most risk of being left behind.

Environmentally-conscious forestry already uses working animals in logging as their impact on sensitive woodland is much lighter than mechanised machinery.  Working animals are able to take the most direct route to a destination so there is little need to build new roads

For communities where motorised transport is either unavailable, unaffordable or impractical, working animals can be the difference between life and death.  They enable people to fulfil their basic needs, providing access to water, food, firewood and medical care.  They can also alleviate poverty, as they enable people to generate an income.

For instance, from Cambodia to Romania, horses are used as draught power to plough fields. In Central America, they are integral to rural and urban economies, pulling carts full of goods to and from market or used in refuse collection to keep city spaces hygienic.

In Colombia, they carry coffee beans from plantations and across Africa, horses, donkeys and mules carry food for other livestock as well as serving as taxis, people carriers and moving vans. Working animals are used to transport medical tests in Lesotho, children to school in Honduras and water to villages in Mexico. They allow people to participate in community saving schemes in Ethiopia, and provide families with the income to pay for their children’s education.

In fact, these roles are undertaken by working animals across all continents, to some degree, yet their relevance to livelihoods has been largely invisible to policy makers and governments. Development organisations and institutions such as FAO acknowledge the importance of livestock such as cattle, goats and pigs to food security, but the working animals which help supply their feed and water – and support the lives of livestock owners – are still largely under the radar.

Conversely, in many industrialised nations, working animals may be considered old fashioned and niche, even though they still play roles in transportation, tourism and livestock raising.  Another reason may be that the people who rely on working animals tend to be the poor and marginalised due to geography or socio-economics, so they do not have a strong voice.

Yet another reason may be that some nations do not want to acknowledge many of their citizens still rely on working animals in their economies, focusing instead on their progress towards mechanisation.  Why support an apparently outdated way of doing things when the march is on to modernise?

There are three factors that should cause us to embrace the use of working animals. The first is the SDGs themselves, which working animals already help to achieve. Were there policies supporting them and ensuring they were healthy and productive, the benefits of using them would increase.

For instance, a working horse in Senegal costs around $400. If owners were supported with knowledge to provide better basic care to that horse or donkey, and if there were skilled affordable local service providers available to provide vital hoof and veterinary care, they could use their asset for more than ten or 15 years.

However, without this, that horse could quickly become lame or die, and so unproductive, leading to hardship for the family– so requiring the already struggling owner to invest another $400 to get back to square one.

The second factor that should awaken us to the relevance of working animals is climate change.  Working animals as mentioned above are a tried and tested green power source. Not only can they survive happily on grasses and plants, but they emit less methane than livestock – and horse manure is an effective and widely used organic fertiliser.

Environmentally-conscious forestry already uses working animals in logging as their impact on sensitive woodland is much lighter than mechanised machinery.  Working animals are able to take the most direct route to a destination so there is little need to build new roads. Working animals do not require parts made of scarce metals nor are they dependent upon the price of fossil fuels. And when a working animal dies, it can be absorbed back into the earth.

Thirdly, it has long been understood that human and animal health are closely intertwined, and we ignore this at our peril – as we have seen with COVID 19. The UNEP has recently pointed out that 75% of all emerging infectious diseases are from animals and they do not exclusively emanate from wildlife.

Domesticated animals and livestock can be carriers too, as seen in other previous epidemics such as Middle East Respiratory Syndrome (MERS) in 2012 and Avian Influenza Virus H7N9 epidemic in 2013, and now with the current pandemic. Safeguarding the health and welfare of vital working animals is therefore of utmost importance in protecting the health of people.

Some are awakening to the importance of working animals – for instance the OIE has worked with the International Coalition for Working Equids (ICWE) to develop basic guides to equine welfare and the World Bank is seeking to implement these in their programmes.

However, the fitness and health of working animals has relevance far wider than the realms of veterinary medicine and agriculture. This is why we have established the Working Animal Alliance – an informal network of NGOs, countries, development agencies and organisations to help raise awareness of the role of working equids in achieving the SDGs and the need to provide systems of support for owners to better care for their most important asset.

If you agree it is time to respect our working animals and appreciate the contribution they make right now, as well as in the future preservation of our sustainable planet, then please join us.