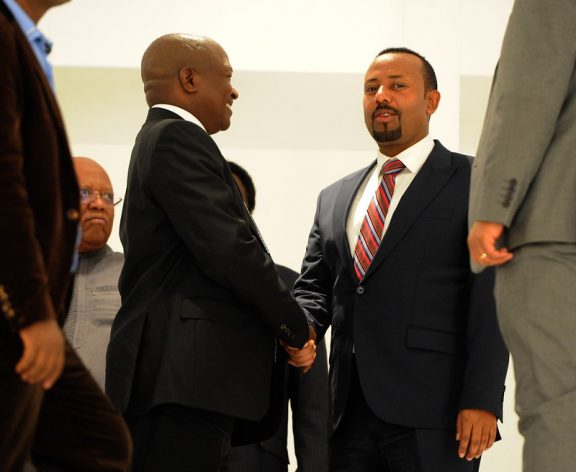 Ethiopia's Prime Minister Abiy Ahmed shrugged off concerns that Ethiopia could descend into civil war, even as reports of clashes between federal soldiers and those loyal to the Tigray region’s governing party continued. Courtesy: GCIS

UNITED NATIONS, Nov 10 2020 (IPS) - Already reeling from conflict, extreme weather events and growing displacement due to the COVID-19 pandemic, escalating tensions in Ethiopia’s Tigray region have placed the country on the brink of civil war and many are looking to Nobel Peace Prize-winning Prime Minister Abiy Ahmed to avert a potential humanitarian disaster.

The Tigray People’s Liberation Front (TPLF) has called the Prime Minister an ‘illegitimate leader,’ after Abiy announced that he would postpone elections due to the pandemic. The country’s parliament has in turn declared the Tigray administration illegitimate and last week voted for its dissolution. Prime Minister Abiy confirmed that air strikes had been carried out in the region and warned of further action against military targets.

In a social media post on Nov. 9, the Prime Minister however shrugged off concerns that Ethiopia could descend into civil war, even as reports of clashes between federal soldiers and those loyal to the Tigray region’s governing party continued.

Abiy’s statement came less than a week after United Nations Secretary General António Guterres expressed ‘grave concern’ over the reports of violence and attacks on civilians, while calling for ‘inclusive dialogue’ to diffuse tensions.

The Norwegian Refugee Council (NRC) has joined the growing number of agencies calling for dialogue to end the conflict. The NRC operates in seven regions in Ethiopia, including the northern Tigray region. The Council’s Regional Director for East Africa and Yemen, Nigel Tricks, spoke to IPS about the current refugee situation in Ethiopia and why the country can ill afford further escalation in violence.

Inter Press Service (IPS): In your statement you noted that the escalating tensions in Ethiopia are adding to an already tenuous situation that includes mass displacement. What are some of the current humanitarian needs in Ethiopia?

Nigel Tricks (NT): Ethiopia has been a centre for humanitarian response for some time; a situation driven by conflict and erratic weather that have caused cyclical droughts and floods. In 2020 alone, over 19 million people across the country are in need of humanitarian assistance, a situation that has been compounded by the COVID-19 pandemic. As a result of recurring food crises, the U.N. estimates 687,000 children will require treatment for severe acute malnutrition. On top of that, Ethiopia is home to 792,000 refugees mainly from Somalia and South Sudan as well as close to two million internally displaced people. The country has also been affected by the recent desert locust infestation, which risks further aggravating the food situation for millions of people.

More specifically to Tigray and according to the U.N., more than two million people in the region need some form of humanitarian assistance, including 400,000 people who are food insecure, or unable to meet their food needs. The region is also home to 96,000 refugees, approximately 12 percent of the total number of refugees in Ethiopia.

IPS: What would heightened tensions mean for the people of the Tigray region?

NT: Escalating tensions that could result in conflict threaten the safety of thousands of people. Both local communities and displaced people and refugees hosted in the area, are at the risk of being caught up in violence. Conflict would also make it more difficult for vulnerable families, who already rely on aid, to safely exercise their right to access humanitarian assistance like food, health and education especially in the context of a global pandemic. As a result, more people will be forced to migrate, putting them at different risks and making them dependent on humanitarian aid.

IPS: You called for an end to military action. What do you think it would take now to diffuse this situation?

NT: Concerted efforts between the national government as well as leaders in the Tigray region will be paramount in de-escalating tensions. Given the country’s influence across the region, actors such as the African Union can also play a role in helping Ethiopia find a lasting solution to the crisis and enhance greater regional stability.  We would also like to see Ethiopia’s many friends in the wider international community offer their help in finding satisfactory outcomes for all parties.

IPS: Prime Minister Abiy Ahmed is a Nobel Peace Prize winner. Do you think that this situation presents an opportunity for him to live up to the ideals of this award and prove that a peaceful resolution is possible?

NT: Ethiopia, in general, has been perceived as a beacon of reconciliation since Prime Minster Abiy Ahmed initiated reforms in the country in 2018. Regionally, the country has also been an important regional influence for good, for example in South Sudan’s peace processes. Ethiopian leaders, including regional and national authorities, have the opportunity now to focus efforts towards a peaceful resolution to the crisis and avoid more violence.

IPS: The eyes of the world are on the United States’ elections, but is it time for world leaders to address the ongoing conflict in Ethiopia?

NT: World leaders, including international governments, have played their part in supporting Ethiopia both in responding to the current humanitarian situation as well as in their nation-wide development efforts. However, the international community including African regional leaders should step up the involvement in helping Ethiopia find peaceful solutions before there is widespread conflict. The U.S. can make a difference.  How it communicates on the conflict in the coming days could contribute to or reduce tension.

IPS: The NRC has spoken out on the Ethiopian humanitarian situation. Going forward, how do you proceed? Is it a case of monitoring the situation and continuing to provide shelter and assistance on the ground or does it also mean preparing for a possible influx of refugees?

NT: NRC will continue to monitor the situation while delivering its humanitarian mandate across the country including in the Tigray region where we have been working for several years. We will also work closely with government authorities as well as local and community organisations to ensure that aid reaches those that need it the most in an efficient manner and ensure that, should the situation call for it, we are sufficiently prepared to increase our response.