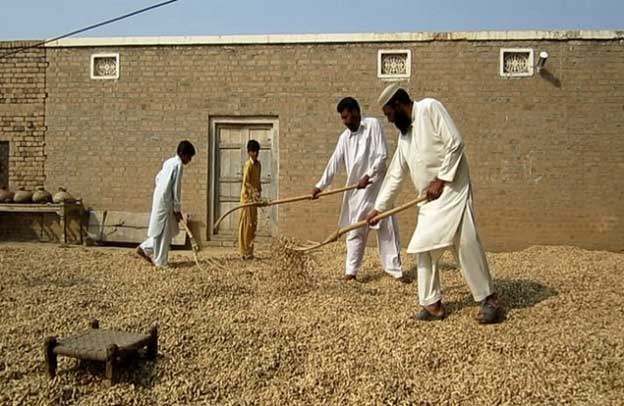 AMMAN, Jordan, Dec 21 2020 (IPS) - Anas Shaikh is a Pakistani farmer on a mission to bring solutions to the many difficulties small and medium-scale farmer’s face in making a sustainable living.

One of the main challenges he observed has been the difficulties for farmers to sell their produce at the right time to avoid post-harvest waste and at prices that were not exploitative due to the large number of middlemen and corporations that are now involved in the agricultural supply chain.

“The agriculture community everywhere but especially in developing countries is loaded with so many difficulties, despite the crucial role farmer’s play in the economy and food security of their countries,” says George Stacey, an analyst working with Norvergence, an environmental advocacy NGO.

“There are a lot of problems contributing to this but one of the biggest is that farmers are exploited and not paid what they deserve for their produce.” Just across the border, in India, tens of thousands of farmers are currently protesting against three new agricultural laws that aim to deregulate Indian agriculture.

Even though the laws say farmers will still have price assurances, but the language is vague, and farmers are nervous about losing government support and having to sell directly to large companies. Farmers are particularly worried that they will not be able to sell their produce and go into debt.

Already, across the region, the increasing number of intermediaries, such as wholesalers and processors – as supply chains become more monopsonistic and monopolistic due to the growing influence and presence of large global companies in markets – continue to lower the returns earned by small scale farmers.

In addition the lack of road and rail connectivity and limited accessible storage or warehouse infrastructures in Pakistan and India also further increase the need to rely on middlemen.

“Lower returns continue to exploit farmers and push many further into poverty,” says Stacey. “This also impacts the quality of produce that is grown as farmers are no longer able to access many resources such as good quality of pesticides.”

Shaikh is now on a mission to use technology to find solutions to the biggest challenges small local farmers face.

He has recently founded Peepu, an easy-to-use mobile application that cuts down on the several middlemen and the time that it takes to sell agricultural products by facilitating direct transactions between farmers and traders.

Shaikh points out that the app’s simplistic interface has been designed to ensure accessibility, keeping into consideration that the target users may not all be tech-savvy.

“I have worked in the field as a small farmer and I know farmers. This is why the app has been deliberately designed in a fashion that the farmers will find it easy to use,” says Shaikh.

Peepu was launched earlier this year on Google Play in March, and is being used by more than 700 Pakistani farmers and aims to expand further in the coming months.

“Farmers are able to sell their products at the earliest possible time and at a competitive price,” says Shaikh.

“What we are trying to do is use the technology to shift the power of negotiations back to small farmers and also allow them the possibility to conduct business with anyone, regardless, without the limitations imposed by geographical proximity.”

Currently, agriculture is one of South Asia’s biggest employers. Nearly 70 percent of the region’s population is employed in agriculture and the majority of people in the region live in rural communities.

And technology, such as Peepu, can drastically help answer many of the difficulties farmers face that also have long-term social and economic impacts.

For instance, a shorter chain of intermediaries can also potentially diminish the post-harvest losses generated due to the degradation in the quality and quantity of the crop products through the stages of the supply chain from harvest to consumer use.

“Farmers directly selling to traders in a way that isn’t exploitative and without the many middlemen involved, also provides a pragmatic solution to the utilization of unavoidable post-harvest food waste which isn’t just beneficial to farmers but also important in reducing food waste and, thus, improving food security,” says Shaikh.

Several reports, such as by The World Bank, warns that ensuring food security in South Asia, as its population continues to exponentially expand, will be one of the main challenges for the region to address in the coming years.

The region is currently home to more than 1.8 billion people — with the majority living in India, Pakistan, and Bangladesh — and has been the fastest-growing region for half a decade. The population of the region is expected to further increase by 40 percent by 2050, according to the UN.

And many experts agree that addressing food insecurity is going to be amongst the top policy agendas to ensure stability in what is the most populous and amongst the poorest regions of the world.

Kamal is working with sustainable food companies to research approaches to recycling and reutilizing food waste into functional products.

Studies have also established the importance of policies that address securing food availability that considers the context and impacts of climate change on agriculture.

A report by the Intergovernmental Panel on Climate Change (IPCC), for example, states that while climate change and rising temperatures will affect food production across Asia differently, the most food insecure populations are likely to be in South Asia.

Kamal points out that the urgency of tackling food insecurity issues can led governments of developing countries to launch short term and fast tracked initiatives, without proper co-ordination resulting in slower progress and economic inefficiencies.

“This can be reversed if there is better activation of opportunities and co-ordination amongst research institutes, research and development centers, universities and private and public enterprises and ministries,” she adds. “It is innovation that, after all. increases the scope and number of emerging technological process, logistics, marketing and operating costs.”

Peepu is currently involved with the National Incubation Center (NIC) in Karachi, Pakistan’s economic center, and is seeking funding from external investors.

“While technology can be and exploitative force, it also offers a potential for small farmers to get some of their power back and have more control over how and to who they sell their crops,” says Stacey.

“It doesn’t solve the many problems small farmers experience but it can be a tool to navigate through the challenges until better policies come along that protect them.”