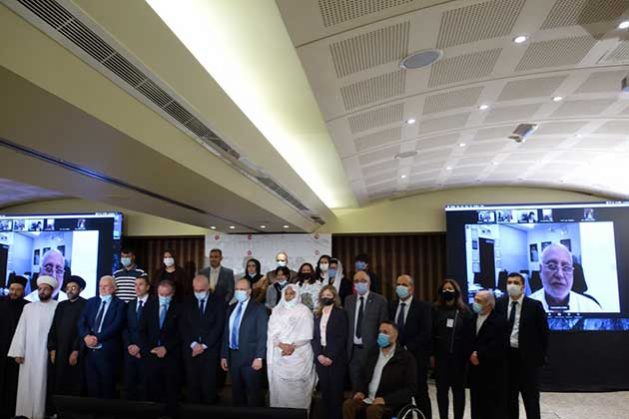 Delegates at the hybrid conference held virtually in Beirut, Lebanon. The conference discussed the impact of COVID-19 the regions’ ICPD25 commitments. Credit: APDA

The hybrid conference, held simultaneously in Beirut, Lebanon, and via video conferencing to delegates in Asia and the Arab region, was a follow up on earlier discussions on the regions’ ICPD25 Commitments.

Dr Luay Shabaneh, Regional Director, UNFPA ASRO, said research showed that women were impacted more than other groups – especially as they made up 70% of front-line workers. Women’s health and reproductive rights needed to be high on the agenda because the pandemic’s mortality rate was higher for women. He called on parliamentarians to take care of reproductive health and rights, ensure laws to punish perpetrators of gender-based violence were enacted, and finance for programmes was available.

“Every two hours, a woman dies while giving birth in Yemen,” Shabaneh said. During a recent visit to the country, he met a divorced woman who was 14 years old and a grandmother of 27. Her husband and her mother-in-law abused the grandmother until she decided to leave.

“These case histories were not unusual in the Arab and Asian region,” he said and needed addressing.

Other delegates at the conference, organised by the Asian Population and Development Association (APDA) and the Forum of Arab Parliamentarians on Population and Development (FAPPD), agreed. The conference heard that in the Arab world, female circumcision impacted 55% of girls aged between 15 and 19 years old, and one in five girls marry before there are 18. The diversion of resources and attention away from ICPD25 commitments impacted child marriages and female circumcisions – with estimates that 13 million child marriages and two million female circumcisions could have been prevented. 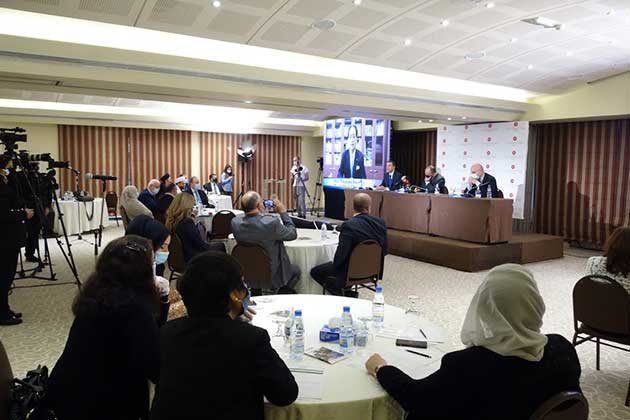 Teruhiko Mashiko, a Japanese MP and member of APDA Board of Directors and Vice-Chair of the Japan Parliamentarians Federation for Population addresses a hybrid conference of parliamentarians from Arab and Asian countries on impact of COVID-19 the regions’ ICPD25 commitments. Credit: APDA

Teruhiko Mashiko, a member of the Parliament from Japan, member of APDA Board of Directors and Vice-Chair of the Japan Parliamentarians Federation for Population (JPFP), reminded delegates the means to fight against pandemic were being developed. It was crucial, however, to keep an eye on population issues to achieve sustainable development. More than 115 million people had been affected by COVID-19, and more than 2.5 million people died globally. However, tens of millions of unwanted children were born every year.

Minister Plenipotentiary Tarek El-Nabulsi, representative of the League of Arab States, said a report on the region had shown the dire implications of COVID-19 and the need to prioritise the ICPD and Sustainable Development 2030 plan.

“The report estimated 1.7 million jobs would be lost in the region, and the middle class would decline,” El-Nabulsi said. “Eight million people could move down onto the poverty line.”

Moving education onto digital platforms had not benefited the poor who did not have access to technology, and it also disadvantaged people with visual and audio disabilities.

Minister El-Nabulsi said the Arab League had arranged a meeting of high-level officials to enhance national initiatives to control COVID-19 and its impact on vulnerable people. A 15-point plan was set up to reduce its impact on women and girls, protect women, and support and protect pregnant women. The social sector segment also launched an initiative to protect women in refugee camps and women under occupation.

With the support of the UNFPA, an education campaign to confront the coronavirus under the hashtag #COVID-19TalkAboutYourStory was launched.

El-Nabulsi was one of several delegates who expressed concern over the refugees. The refugees in the region placed a heavy burden on the states because it was crucial to extend healthcare services to refugees and displaced.

Asem Araji, an MP from Lebanon, said 1.5 million displaced Syrian refugees and Palestinian people would need vaccinations. He said this should be international responsibility and not just the responsibility of Lebanon.

The impact of the pandemic on education was high on the agenda of the parliamentarians’ concerns. Elyas Hankash, an MP in Lebanon, said the COVID-19 lockdowns had a social, psychological, and physical impact on the youth.

“Unemployment and the lack of prospects had impacted their psychological health,” he said. This led some to drugs and others to depression.

The disruption to education was a disaster, especially as many youths could not connect to the internet and could not participate in the online educational offerings—this resulted in school dropouts.

Lebanon’s economy was fragile, and many young people work in the informal sector, lacking worker protection.

Forty-one percent of the country’s youth had been negatively affected. Unemployment increased when many businesses closed.

He called on other countries in the region to assist – this was a burden that needed to be shared.

Hankash said that while $50,000 had been set aside for youth development, what was needed was a proper plan, including a cheaper housing plan.

Pierre Bou Assi, an MP in Lebanon, expressed concern that the pandemic’s solution – the vaccine programme was problematic as there was no equality of access between countries. He too feared with two years of education lost, “a generation of children was sacrificed”.