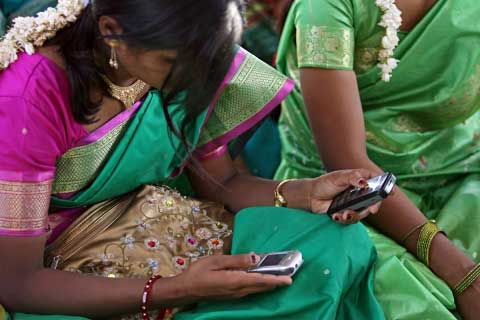 WASHINGTON DC, Mar 10 2021 (IPS) - The gender gap in mobile phone ownership is well-documented. For years now, the financial inclusion community has been trying to get phones into the hands of more women at the last mile — spurred on by mounting evidence that mobile money can increase women’s financial resilience, expand their economic opportunities and improve their intra-household bargaining power.

While these efforts have undeniably increased women’s access to phones, it’s less clear to what extent the beneficiaries of these programs are using phones to improve their lives.

A common approach to improving women’s access to mobile phones has been to give phones away. When we asked the FinEquity women’s financial inclusion community about the initiatives they were seeing around the world, we learned of several examples.

For instance, the state of Chhattisgarh in India has been building cell phone towers in rural areas and distributing Reliance Jio and Micromax smartphones for free. Its goal is to have “a smartphone for one woman in every household.”

The program and government’s endorsement of the phones has contributed to greater acceptability of young women using mobile phones.

Convinced that phones will help these women to boost their productivity and income, OISL trained women and their spouses in digital financial literacy and gender awareness and then gave them free smartphones.

OISL also provided training-of-trainers support for select women in the community (including mobile agents) to ensure ongoing support for phone users. This is a short-term solution for the company, which is looking into another longer-term approach to increasing women’s phone ownership: helping clients to finance smartphones.

Though smartphone financing is less common than simply giving phones away, GSMA has documented similar initiatives in countries like India, Kenya and Rwanda.

In India, Reliance Jio has offered 4G-enabled phones for a $25 deposit, which comes down to less than $10 with subsidies or when purchased with large, low-cost data plans.

In another case, SIA worked with the Foundation for a Smoke Free World, to distribute $11 phones on a three-month payment plan with two agricultural organizations and a mobile network operator in Malawi.

Regardless of whether they’re given away, financed or bundled with other life-enhancing services such as agricultural or health information, phones only matter if women actually use them to meet their goals.

This doesn’t always happen. In Chhattisgarh, for example, the limited evidence to date suggests that although women are making calls and using WhatsApp, overall usage of the phones is limited.

As these complaints illustrate (and as a soon-to-be-released GSMA and Busara study in Kenya details), there are many reasons why women may not use their free phones. Some have to do with the quality of the handsets.

Low-quality imported models often purchased for $30 or less, such as those given away in Chhattisgarh, are not necessarily user-intuitive or suited for harsh rural conditions.

And although the phone itself may be free, there are costs of phone ownership that women may not be willing or able to cover, such as data and electricity. In some instances, the use cases for the phones aren’t compelling or encouraging enough for women to learn how to use them.

Additionally, digital literacy is a barrier for many women. In both India and Ghana, GSMA tells us it found low digital skills and lack of confidence — the fear that they would do something wrong — discouraged many women from using phones.

Underlying issues like digital literacy are gendered social norms that affect how women interact with technology. In some cases, norms may convince women that technology isn’t for them.

As we wrote in our last blog post about social norms, “While there is often an assumption that the gender divide will disappear on its own as digital technologies become more widely available in the market, the reality is that men and women engage differently with digital services – including digital financial services (DFS) – because of, among other factors, gendered social norms that don’t change nearly as fast as technology.”

Despite the many barriers to women’s use of free mobile phones, there are encouraging developments when it comes to use cases. Government-to-person (G2P) payments are creating more compelling use cases for women in certain contexts to own and use mobile phones.

For example, the GEWEL Program in Zambia, funded by the World Bank with the Ministry of Community Development, distributed phones as part of its efforts to digitize G2P payments. A recent evaluation produced positive results, showing that most users withdrew their funds with mobile money.

As part of the evaluation, researchers called random participants to see who would answer the phone. Many of the women participants picked up, suggesting that the phones had not been taken by family members or sold.

COVID-19 may also be encouraging women to discover the benefits of mobile phone ownership. We have seen a shift in mobile and digital usage patterns during the pandemic, with phones facilitating interactions that can no longer be done face to face.

Additionally, research has shown that gendered social norms can relax during moments of transition and upheaval and could make it easier for women to purchase a mobile phone.

For example, in their Women and Money research, Ideo.org found that women were sometimes able to gain more economic independence (for example, by entering the workforce) when a significant shock took place, such as when a male family member and income-earner died.

But the bottom line is that handset affordability — the focus of most programs to distribute free phones to women — is far from the only barrier to women’s use of mobile phones as a tool to improve their lives.

While efforts to increase women’s access to mobile phones are important, they should be carried out together with norm-aware interventions that increase the value proposition of mobile phone ownership, address ongoing costs, tackle digital financial literacy and use behavioral nudges to help women see the phones as tools to improve their lives.

As a Harvard Evidence for Policy Design study notes, efforts to give mobile phones to women without considering the prevailing norms may have negative consequences at the household level or be quickly rendered obsolete if other household members take the phones.

Going forward, it will be important for interventions to address not only affordability constraints, but more importantly, the deep-rooted social norms that reinforce and deepen the digital divide.

*The Consultative Group to Assist the Poor is an independent think tank that works to empower poor people to capture opportunities and build resilience through financial services. Housed at the World Bank, CGAP is supported by over 30 leading development organizations committed to making financial services meet the needs of poor people.