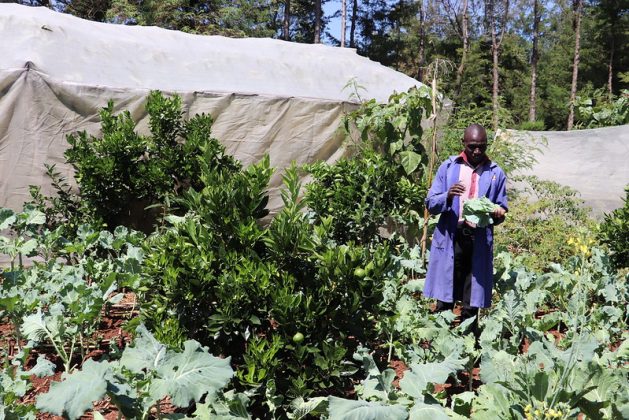 World Food Programme Deputy Executive Director Amir Abdullah says that no matter how much improvement is made in food production, it will all be futile unless the issue of water security is addressed. He said humanitarian and food aid can never be enough to manage cascading climate shocks. Credit: Isaiah Esipisu/IPS

He was speaking at the “Building Food and Water Security in an Era of Climate Shocks” event organised by the UN Department of Economic and Social Affairs (UN DESA). The meeting featured representatives from other UN bodies, farmers’ associations and startups working on water security and agriculture around the world.

Abdullah highlighted the numerous disasters that hit globally last year while the world was in the middle of the pandemic: destructive heat waves, wildfires, floods, storms, and locust outbreaks.

“Humanitarian aid can never be enough to manage these cascading shocks that keep breaking down food systems and pushing people into food and water crises,” he said.

He added that no matter how much improvement is made in food production, it will all be futile unless the issue of water security is addressed.

“We can deliver food assistance but if farmers don’t have adequate access to water resources for food production, people will just continue being hungry,” he said. “And if people don’t have access to clean water, they can’t retain the nutrition they need even if we provide them with food assistance.”

Betty Chinyamunyamu, CEO of the National Smallholder Farmers’ Association of Malawi, said the past decade has witnessed an “onset of weather crises” which have made it extremely difficult for farmers to plan their sales.

“Increased incidences of new pests, diseases and unpredictable weather patterns make it more difficult for farmers to plan their farm enterprises. So when they’re not sure whether they are going to have a flood or whether they are going to have drought, it becomes very difficult to engage in initiatives that would otherwise be very rewarding for them,” Chinyamunyamu said.

“That unpredictability of weather is really making agriculture less profitable for the farmers,” she added.

Cherrie Atilano, CEO and President of AGREA, which works to ensure fair trade in sustainable agriculture in the Philippines, brought up the importance of collaboration between the private and public sector. She pointed to an example that worked in the Philippines at the beginning of the pandemic.

Just a few days after the first lockdown, many farmers were left wondering where to take their produce, as their mobility had suddenly been restricted, she said. At the same time, in Manila, the country’s capital with a population of more than 12 million, people scrambled for groceries as supermarkets shelves were empty.

Her team addressed this by contacting the agriculture ministry asking for farmers’ access to work to be restored so long as they maintained COVID-19 protocols.

Meanwhile, Chinyamunyamu shared the role that digital platforms and innovative technology played during the crisis, especially in giving access to marginalised groups.

The lockdown was especially disruptive for the farmers in Malawi, because it came at a time which was the “only marketing season” for them, she said. Chinyamunyamu explained that farmers were able to address this challenge through innovative approaches, including using digital technology such as mobile phones

Farmers were able to share information with each other on markets, as well as developments about COVID-19 by communicating via mobile phone. This was especially important for marginalised groups because it established an important way to reach vulnerable communities.

However, concerns remain about what lies ahead.

“In the coming decades, many regions around the world are expected to experience increased water scarcity driven by climate change and exacerbated by increasing competition for water resources,” Abdullah said.

“The battle for water will be one of the next ‘great challenges,’” he added.

Samir Ibrahim, co-founder of SunCulture, a startup for solar-powered generators and water pumps in Africa, shared his experience working with innovative technology on the continent.

He pointed out that new ways for the allocation of funds was crucial for the sustenance of such projects.

“What is important for the ‘newness’ is not necessarily new technologies,” he said. “What we’ve seen is that emerging markets were solving problems that have been solved in other parts of the world.”

He said that while their company did not invent solar irrigation, it was “the first to commercialise in Africa”.

“While technology is incredibly important, we had to do a lot of innovation on battery storage,” he added.