The author is Executive Director at Oxfam International

Tents and makeshift shelters at an IDP camp in Yemen. Years of conflict has left millions at crisis levels of hunger, with some facing starvation due to COVID. “This fight…is far, far, far from over,” said WFP Executive Director David Beasley, briefing the Security Council during a virtual debate on conflict-induced hunger. Credit: UNICEF/Alessio Romenzi

UNITED NATIONS, Mar 12 2021 (IPS) - In 1941, the people of Greece were facing a horrific winter. The Axis powers had plundered local supplies and introduced an extortionate tax on Greek citizens. Allied forces imposed a cruel blockade, cutting off imports. Prices skyrocketed. Hundreds of thousands of civilians perished.

I have been invited to address you today as the Executive Director of Oxfam International, an expression of people power that was first launched to stand with the people of Greece to demand their most basic of rights – the right to food – in the midst of conflict.

I am horrified that we are forced to confront the same basic injustice that gave birth to our founding nearly 80 years ago. Indeed, as we witness blockades cutting off food and fuel to Yemen, millions going hungry in the Democratic Republic of Congo, Afghanistan and Syria, we should all be horrified.

Three years ago, when this Council unanimously adopted Resolution 2417, we heard an unequivocal condemnation of starvation of civilians as a method of warfare. We heard a recognition that peace and security in an armed conflict means the presence of food as much as the absence of gunfire.

Many of the countries that were at risk of famine from conflict in 2017 are still at risk. And now, more countries have joined them.

Overall, at least 88 million people are suffering through acute hunger in countries where conflict and insecurity stalks. Women and girls are disproportionally affected, too often eating last and eating least.

People in these areas are not starving; they are being starved. It makes little difference to the hungry whether they are being starved by deliberate action or the callous negligence of conflict parties or the international community. An international community whose most powerful states too often drive starvation with a plentiful supply of weapons. 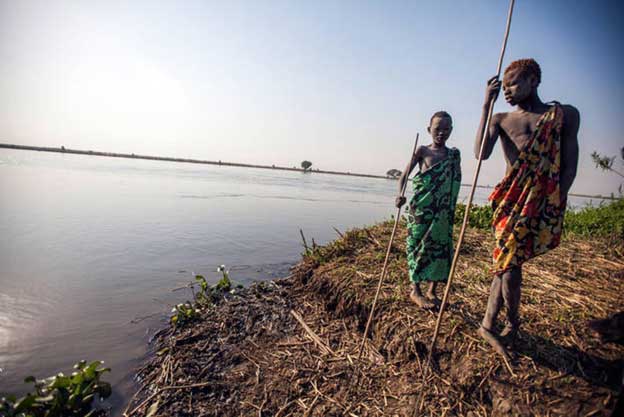 A’eshah Yahya Dahish is from Yemen. When her village was bombed, she was forced to flee. A’eshah had dreamed of becoming a midwife, but in an economy under attack from all sides, it takes all the energy she has just to survive. n Her two-year-old brother Maydan depends on her, but all she can afford to feed him is a few crumbs in water. Maydan is so malnourished that A’eshah believes any exposure to Covid-19 will be fatal.

Tesfay Getachew, a farmer in Tigray regional state in Ethiopia, has faced blackouts, market and bank closures that have devastated millions, but felt he could rely on the food he grew to feed his family. Last November, his village was shelled and his crops were set on fire, leaving his family with nothing.

Housseina is from the Central African Republic. The country has seen a deadly spike in violence over recent months that has led to insecurity on roads, meaning that food isn’t getting to markets. Food prices have skyrocketed by 240% in some areas. Housseina’s home and fields were destroyed in the fighting.

With support from Oxfam, she replanted her crops – only to see them destroyed again in the recent fighting. “My pain was immense,” she said. “I don’t know how to feed my family. We ate almost exclusively the vegetables that I grow.”

Women like Housseina want you to live up to your basic promise to keep their families safe. She and her fellow farmers are more than capable of producing enough to feed their families, but they cannot do so in the face of violence.

Women in conflict face impossible choices – to travel to market and risk crossing checkpoints, or to watch their families go hungry? To harvest their crops and risk being attacked, or to stay and face starvation?

Sometimes they have no choice. Sahar, three, and her sister Hanan, eight, were displaced by the conflict in Yemen, and forced to marry because their parents said they could not feed them.

I am here to amplify their call to the Security Council to make good on its unanimous agreement to break the vicious cycle of conflict and food insecurity. How?

First, the Council should deepen its work on this topic with a clear commitment for action. It should agree on depoliticized criteria facilitating the regular, mandatory reporting on situations where there is a risk of conflict induced famine or food insecurity. It should undertake quarterly reviews of action on the white papers considered under the early warning system.

Second, the Council must take genuine action to support the Secretary-General’s call for a global ceasefire. Urgently. Ensuring humanitarian access. Ensuring the inclusion of women from the beginning of the process. It took 4 months for this Council to support the initial call for a ceasefire. People on the edge of starvation do not have the time to wait another year for action.

Third, the Council should apply the principles they have endorsed in the abstract to the particular situations on its agenda. It should impartially condemn the starvation of civilians as a weapon of war, the targeting of critical food infrastructure, and all restrictions on humanitarian access. It should also take any opportunity to create meaningful accountability for starvation crimes. Today, there is near-global impunity.

Fourth, it should endorse – and its Members should lead – the effort to fulfil the global appeal for $5.5 billion to meet additional needs to avert famine, most especially in light of Covid-19. To be most effective this aid must flow as directly and urgently as possible to local organizations, especially women-led and women’s rights organizations, which are on the front line in addressing hunger.

And fifth, it should endorse a People’s Vaccine for Covid-19 that is free and accessible to all. Ending this pandemic will not end hunger, but we won’t end hunger if we cannot end this pandemic. Rich nations must unlock global supply constraints and help get the vaccine to all who need it.

Our failure to address hunger before the Covid crisis, and the rampant inequality and climate change which has so often triggered conflict, has left us scrambling to avert famine across the globe.

Let us also be clear: Starvation is a symptom of a deeper problem. The growing crisis of starvation is taking place in a world where eight of the biggest food and drink companies paid out over $18 billion to shareholders last year.

Those dividends alone are more than 3 times what we are asking for in aid today to avert catastrophe. There is not a lack of food, there is a lack of equality.

There is an unnerving consistency in what people living through hunger and conflict around the world tell us they want. They want peace. But what does peace mean to them?

Peace is not just the absence of war but the ability to live in dignity and flourish. It means a job. A return home. Stable, affordable food prices. If the Security Council aims to foster peace in their name, it should be no less expansive in its perspective and its actions.

* An address before the USUN-hosted Security Council Open Debate on Conflict & Hunger, on March 11.