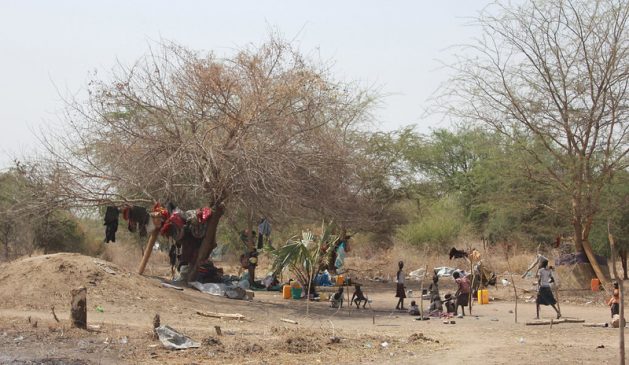 A new report categorized people in Burkina Faso, South Sudan and Yemen as being in ‘Catastrophe,’ meaning that they need immediate action to prevent widespread death and collapse of livelihoods. This year’s report on Food Crises presents the grimmest snapshot to date of global food insecurity. Thousands of displaced people camping under trees in Minkaman, northeastern South Sudan.(file photo). Credit: Andrew Green/IPS

UNITED NATIONS, May 6 2021 (IPS) - The COVID-19 pandemic, protracted conflicts and climate change have created an untenable situation for the most vulnerable, with 155 million people across 55 territories suffering from severe food insecurity, sending acute hunger figures to a 5-year high.

That’s according to the Global Network Against Food Crises, an alliance of humanitarian partners working to prevent hunger and respond to food crises. The Network, which was founded by the European Union, Food and Agriculture Organisation (FAO) and World Food Programme (WFP), released the findings of its 2021 Global Report on Food Crises on Wednesday, May 6.

The partners have issued an annual report on food crises since 2017, but this year’s publication presents the grimmest snapshot to date of global food insecurity. It reported that 20 million more people faced acute hunger in 2020 than the previous year.

Stating that by the end of 2020, the zero hunger by 2030 goal seemed “increasingly out of reach”, the report categorised 133,000 people in Burkina Faso, South Sudan and Yemen as being in “catastrophe”, meaning that they need immediate action to prevent widespread death and collapse of livelihoods.

The Network Partners say it is possible to reverse the rising trend of food insecurity, but this requires urgent commitment, finance and action.

“Humankind can now pilot a helicopter drone and even split molecules to generate oxygen on the far-off planet of Mars, yet here on Earth, 155 million of our human family are suffering acute hunger and their lives and livelihoods are at risk because they lack the most basic of foods. The contrast is shocking and not acceptable,” said FAO Director-General Qu Dongyu.

The FAO Chief says as the international and humanitarian community prepares for the United Nations Food Systems Summit in September, the information in reports like this one should serve as a guide for solutions to the world’s hunger crises.

“This requires a bold transformation of agri-food systems to be more efficient, inclusive, resilient and sustainable. This includes the development of early warning systems linked to anticipatory actions to protect livelihoods and food security before a shock or the threat emerges,” he said.

UN Children’s Fund Executive Director Henrietta Fore told the launch that the situation was worrying. She said COVID-19, with its lockdowns, economic and social shocks, has worsened a fragile nutrition situation.

“In virtually every single one of the crises described in this year’s report, the most vulnerable are young children and marginalised, hard-to-reach populations,” she said. “These children and their communities must be our priority. We need to invest in data and information systems that help us identify hot spots of vulnerability and risk at the sub-national levels in key countries. This information is critical in targeting resources efficiently to reach children, their families and their communities who are most in need.”

While the partners lament the staggering acute food insecurity statistics, the outlook is just as dire. They say threat of famine persists in some of the world’s worst food crises.

“Tragically, this report is just the tip of the iceberg that we’re facing all around the world,” said WFP Executive Director David Beasley.

“The global picture is even more bleak when we consider all countries significantly impacted by hunger. For example, chronic hunger, which was 690 million, is now up an additional 130 million people.”

According to the report’s forecast, while conflict will remain the main driver of food crises in 2021, the economic fallout of COVID-19 will worsen acute food insecurity in fragile economies. 142 million people are projected to be in a food crisis, emergency or famine, in 40 territories for which forecasts are available.

“High levels of acute food insecurity will persist in countries with protracted conflicts by limiting access to livelihoods and agricultural fields, uprooting people from their homes, and increasing displaced populations’ reliance on humanitarian aid for their basic needs,” the report stated.

The Global Network Against Food Crises says while humanitarian assistance is urgently needed, on its own, it is insufficient to deal with the scale of the present crises. The Network says the answer also lies in peace and a transformation of global food systems.

“A system that has the most vulnerable people continuing to bear the greatest burden of global crises is broken. We must take this opportunity to transform food systems, reduce the number of people in need of humanitarian food assistance and contribute meaningfully to sustainable development and peaceful and prosperous societies,” it said.