Energy Transition Evolves in Central America and the Caribbean 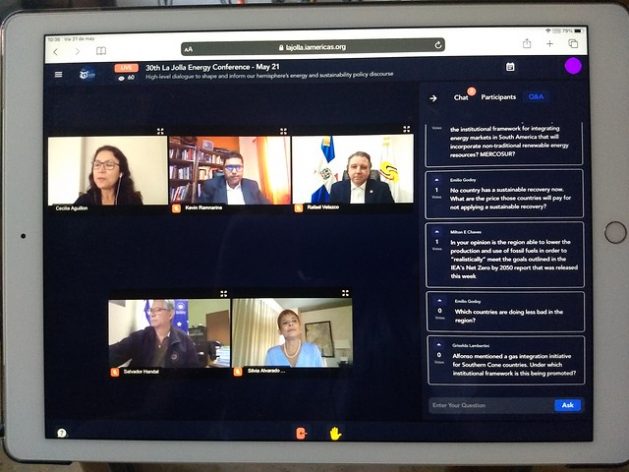 Representatives from the area analyzed this evolution during the third round of debates at the Conference, which began on May 7th and will conclude on May 28th, and whose edition is virtual due to covid-19. It is organized by the Institute of the Americas (IA), which has its headquarters in the coastal city of La Jolla, in the U.S. state of California.

Salvador Handal, executive secretary of the state-owned but autonomous National Energy Commission of El Salvador, said that in his country “in the last decade, the energy matrix migrated from importing fossils to using renewables”.

“In the last two years, the auction of renewables and combined cycle plants have been incremental, even during the pandemic. In the last quarter (January-March), El Salvador generated more than 90 percent of renewables. We are approaching total clean generation. The transition has accelerated,” he said.

Central America has been successful in incorporating renewables into the energy matrix of all countries. Costa Rica has been the leader; it has always had a strong commitment to the environment
Silvia Alvarado, Energy Intelligence Consulting

El Salvador expects an additional 255 megawatts (Mw) based on gas combustion to come on line before March 2022. Energía del Pacífico is building a liquefied natural gas (LNG) regasification plant in the east of the country.

That plant is part of an energy complex for which IDB Invest, Inter-American Development Bank’s private financing arm, lent US$115 million.

In 2020 the Salvadoran government approved the National Energy Policy for 2050, the year in which the Central American nation aims to be carbon neutral – its polluting emissions and avoided emissions add up to zero – and which fosters wind, solar photovoltaic and geothermal energy.

By 2025, El Salvador would only use gas and renewables, according to Handal, who explained by videoconference in a session that focused on how Central American and Caribbean countries are facing the decarbonization of their economies and energy matrix.

Silvia Alvarado, the international firm Energy Intelligence Consulting’s president, outlined the current panorama of Central American countries in this regard.

“Central America has been successful in incorporating renewables into the energy matrix of all countries. Costa Rica has been the leader; it has always had a strong commitment to the environment. Steps behind, Panama and Guatemala have conducted electricity auctions in recent years. The region is in good shape. Prices are low and there is an abundance of electricity. A demand boost is needed,” she said.

In Central America, the majority of electricity generation comes from hydroelectricity, fossil fuels, renewables and geothermal, in that order, according to data from the Economic Commission for Latin America and the Caribbean (ECLAC).

As net importers of fossil fuels, the Central American countries, whose markets have been open to competition since the 1990s – with the exception of Costa Rica – are seeking ways to become less dependent on these external purchases and reduce their already low carbon footprint, agreed speakers at the Conference.

The insular Caribbean region has embarked on a similar path.

Rafael Velazco, Dominican Republic’s Superintendent of Electricity, pointed out that the country has “a diversified generation, with 37 percent based on gas, which we see as a transition fuel and which has been a factor of change”.

The Dominican Republic is about to bid for an LNG plant in the north of the country. In the next three years, the Caribbean nation expects to incorporate 200 MW of gas-fired generation.

Trinidad and Tobago faces a predicament similar to that of the Central American region, due to its dependence on gas to generate electricity.

Kevin Ramnarine, the country’s former energy minister, expressed concern about the scarcity of the molecule and the need to seek other means of electricity production.

“There is an intention to incorporate solar energy and hydrogen,” he said.

Under the Global Alliance Climate Change Plus Initiative, the European Union and the Trinidadian government are building a 110 MW-solar park and a budget of more than 1.5 million dollars.

Both Central American and Caribbean countries face the challenges of energy evolution, such as the need for battery storage and the hype for hydrogen from gas or renewables.

In this regard, Handal predicted that “we are going to transform the regulatory framework, which is obsolete, to include storage and hydrogen. We have to promote and deepen energy efficiency, we have to reduce energy vulnerability. We are going to optimize our natural resources”.

El Salvador and Costa Rica are members of the green hydrogen platform for Latin America and the Caribbean (H2LAC), sponsored by the German cooperation. In the case of El Salvador, thanks to this platform, a geothermal project is being studied in the east of the country, aimed at hydrolyzing water and injecting the fluid into the Central American Electrical Interconnection System.

In turn, Alvarado highlighted the need to bring about these technologies. “The countries are aware of this need, but it is still incipient. We have not yet seen clear regulations for it, although we will have them soon. We will see how renewables will develop a strong niche against LNG,” he said.

The Dominican Velazco also announced the revision of regulations, especially the Renewable Energy Law in force since 2007. “We want to adjust it to cover storage and electric cars,” he explained.

The Trinidadian company NewGen is advancing in a hydrogen project, which will use the heat from a combined cycle plant and will use it to electrolyze water and generate electricity. In doing so, it will also produce green ammonium, for fertilizers.

“Hydrogen through water electrolysis is an attractive option to replace methane,” said Ramnarine.

Energy development in Latin America and the Caribbean is a strategic focus of the IA, which is dedicated to promoting public policy and public-private cooperation in the hemisphere.