NEW DELHI, India, Jul 9 2021 (IPS) - When Turkish- Norwegian writer and filmmaker Nefise Ozkal Lorentzen heard about Seyran Ates’ mixed gender mosque in Berlin, Germany, she immediately decided to make a film on Seyran’s life. It took three years to produce the film, ‘Seyran Ates: Sex Revolution and Islam’ a portrait of a female Imam and her struggles in activating revolution within Islam. 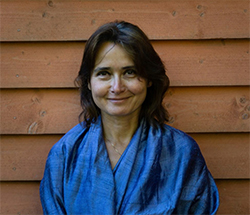 In an interview given to me, Nefise says, “Gender” was the key concept in her quest into the mystery of Islam as a religion. “Seyran Ates is a very powerful woman, but besides being powerful, she is so real, and I found that so fascinating. This film is a journey through Seyran’s life from her humble beginning as a Muslim girl in Turkey’s slums to a female leader daring to challenge her own religion.

“It took me some time to penetrate through the fortifications of bodyguard protections and the thick walls of media interest in her work and to really bring her into “our living room”. Seyran is one of the most police-protected civilian women in our time. Therefore I chose to portray her as a daughter, sister, mother, aunt and also as a good friend,” says Nefise.

Seyran Ates is a human rights lawyer, founder and imam of the Ibn Rushd-Goethe mosque in Berlin, where both men and women pray together, where headscarves are not mandatory and members of the LGBTQI community are welcome. Seyran has been unable to move freely for almost 15 years because of death threats, and has been under police protection from Muslim fundamentalists, turkish-kurdish nationalists and rightwing extremists. One of the main reasons for her attacks, is Seyran’s activism for gender equality and LGBTQI inclusivity in Islam.

“We are living in the 21st century but we are teaching Islam like in the 7th century. Islam needs a sexual revolution,” Seyran says in the film.

Over the past two decades, nefise has produced and directed several documentaries related to Islam. Her trilogy of films entitled, Gender Me (2008), A Balloon for Allah (2011) and Manislam (2014) have covered various topics from islam and homosexuality, women and Islam, power privileges and burdens of masuclinity in Islam and more.

“As a filmmaker, my honesty towards understanding people that I don’t agree with, it gives me an opportunity to build bridges between them and myself. As an artist I have been curious about searching for what is hidden behind reality and how it is interpreted. My cinematographic vision seeks the thin organic lines between reality and memory.

“If Seyran, a girl from the Turkish ghetto in Berlin, becomes the woman who can change the political narrative in Germany, then anyone could make changes in their community. I believe Islam can have a sexual revolution because the youth today can see through it, and they want their freedom, they want to be the drivers of their own lives,” Nefise says.

Nefise’s films have often created a stir because of the topics they has covered, but one can easily say they also opened up discussions, conversations and provided comprehensive treatment to often controversial subject of women, gender, homoseuxality, masculinity in Islam. Religion based social norms and values often go unchallenged and create neverending inequality producing mechanisms, often stemming from deeply rooted patriarchal beliefs.

The struggle in today’s Islamic society is torn between fundamentalists and extremists, often speaking their own narrative or interpretations on Islam and on behalf of Islam, and a pluralist faith which is undergoing its own set of revolutions and changes, most often quietly. “The problem has never been with the text, but with the context.”

By choosing to tell the story of a female Imam living in Germany, Nefise has managed to give a glimpse into the world of revolutionaries, what it takes to not just call for “sexual revolution” in Islam, but also what it takes to stand up for human rights, for gender equality, for LGBTQI rights in conversative and often extremist societies of the world – which are not isolated to just one practise or religion.

Seyran Ates in the film says she does not reject Islam, but she decided to change it from within. The challenge is, can a woman, a woman who fights for inclusivity of the LGBTQI community, who wants men and women to pray together, who believes that women have the right to lead prayers, who is also an Imam, can she act as a bridge between a more compassionate religion and victims of religious extremisms, which also includes racists, white supremists and others.

Reforms take time, and it takes much longer when you are also trying to challenge the given and taught notion of what your religion allows, expects and wants from you. Progressive Islam, in many mainstream Islamic countries is not considered Islam, as it brings about changes and that makes many religious heads uncomfortable. When Seyran Ates as a woman and also as an Imam calls for a sexual revolution within Islam, it definitely triggers Muslim fundamentalists as she has bullet scars to prove that she was attacked for trying to bring these changes.

“It is not only conservative right-wing people who have created many hindrances for progressive Muslim women, but also the left-wing intellectuals who do not dare to take the problems within the Muslim communities seriously. The gender revolution within Islam is highly necessary. I really believe that our film on Seyran Ates will trigger it,” says Nefise.

The author is a journalist and filmmaker based out of New Delhi. She hosts a weekly online show called The Sania Farooqui Show where Muslim women from around the world are invited to share their views. You can follow her on Twitter here.