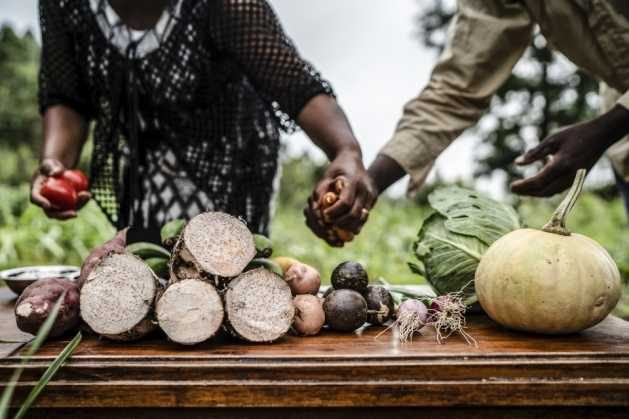 To reduce hunger, food systems must be transformed to prevent 17 percent of total food production from being lost, as is currently the case. Credit: FAO

ROME, Oct 27 2021 (IPS) - During October, the World Food Month, there has been a huge increase in the number of qualified voices promoting new ways to transform food systems that would allow to reduce and eliminate hunger, of which more than 811 million people in the world are already victims.

Based on the conclusions of the Food Systems Summit, held virtually on September 23, as well as its “hybrid” preparatory phase that took place in Rome in July, with the physical presence of 540 delegates and virtual presence of more than 20,000 people around the world, a growing number of personalities continue to advance into these reflections.

Globally, about 14 percent of food produced is lost between harvest and retail sale, equivalent to a loss of $ 400 billion per year, while food waste is estimated to reach 17 percent of total production: 11 percent is wasted in homes, 5 percent in food service establishments, and 2 percent in retail trade

This should pave the way to new avenues paths that will fulfill the Sustainable Development Goals (SDGs) foreseen by the international community by 2030, for which the eradication of hunger and poverty are considered to be priorities.

The transformation of agri-food systems must begin with normal consumers and the decisions they make about the food they consume, where it is bought, how it is packaged, where it is discarded, on the basis that all this will have an impact on the future of the planet, so it is necessary to reduce food loss and waste.

Globally, about 14 percent of food produced is lost between harvest and retail sale, equivalent to a loss of $ 400 billion per year, while food waste is estimated to reach 17 percent of total production: 11 percent is wasted in homes, 5 percent in food service establishments, and 2 percent in retail trade.

Pope Francis, in his message addressed during World Food Day on October 16, recalled that “currently we observe a true paradox in terms of access to food: on the one hand, more than 3 billion people do not have access to a nutritious diet, while, on the other hand, almost 2 billion people are overweight or obese due to a poor diet and a sedentary life.”

“Our lifestyles and daily consumption practices influence global and environmental dynamics, but if we aspire to a real change, we must urge producers and consumers to make ethical and sustainable decisions, and educate younger generations on the important role they play to make a world without hunger a reality,” stated the pontiff.

And for that, he emphasized, we must begin “with our daily life and simplest gestures: knowing our common house, protecting it and being aware of its importance, which should be the first step to be custodians and promoters of the environment.”

According to UN Secretary General Antonio Guterres, the way food is produced, consumed and wasted “is having a disastrous consequence for our planet”, and “this is putting historical pressure on our natural resources and the environment” and “it is costing us billions of dollars every year”, underlining that “the power of change is in our hands”.

The Director-General of the Food and Agriculture Organization of the United Nations (FAO), QU Dongyu is convinced that efforts must be accelerated towards the achievement of the SDGs foreseen for 2030 “with a view to halving food waste in the world and reducing food losses in the production and supply chain, including post-harvest losses,” noting that “there are only nine seasons (harvests) left to do so.”

The Executive Director of the United Nations Environment Program (UNEP), Inger Andersen, recalled that food loss and waste “are the origin of 10 percent of greenhouse gas emissions”, which means that “valuable land and water resources are being used for nothing.”

She added that reducing food loss and waste will slow “climate change, protect nature and increase food security at a time when we desperately need that to happen.”

Dr QU, FAO’s head, agreed and considered that “it is not possible to continue losing 75 billion cubic meters of water per year in the production of fruit and vegetables.”

Experts from FAO estimate that it will be necessary to invest between 40 and 50 billion dollars annually to end hunger by 2030.

In particular, they highlighted the implementation of low-cost and high-impact projects that can help hundreds of millions of people to better meet their food needs, mainly with research, as well as with development and digital innovation to achieve advanced technology agriculture.

These thoughts and initiatives are added to those already made by the Foreign Ministers of the Group of 20 (G20) in Matera, Italy, in June, and the G20 Ministers of Agriculture in Florence, Italy, in September.

In those meetings, they emphasized the value of creating coalitions of countries together with civil society organizations, the private sector, particularly agricultural producers, academics and scientists, as well as other actors to exchange ideas and solutions in this phase of Covid-19 pandemic.

And in turn, to project the post-Covid scenario that helps relaunch countries with sustainability and resilience in strategic areas such as agriculture and food.