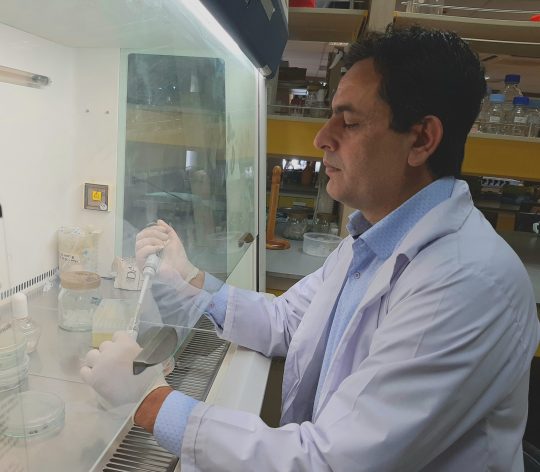 Dr Ijaz Ali has spent the last 11 years persuading the authorities to use genetically engineered mosquitoes to fight dengue fever. The health department, however, is concerned about unforeseen circumstances that could arise from this method.

Karachi , Nov 2 2021 (IPS) - Twenty-three-year-old Sarah Tajammal felt a sense of “impending doom” as she fought high fever, nausea, bouts of vomiting and extreme fatigue after being diagnosed with dengue two weeks back.

Living in Lahore’s DHA area, which has reported the most dengue cases “because of the damp green environment”, she may have caught it at home, or when she went on a tree plantation drive organized by her office, she told IPS over the phone from the eastern city in the Punjab province.

In Punjab, the number has crossed 11,000 and new cases continue to rise. With two and three patients occupying a hospital bed, according to news reports, many are forced to lay on stretchers in corridors.

Tajammal was lucky. Her condition did not reach that critical level. Her fever subsided in three days though nausea and vomiting continued to hound her for a week.

Two weeks later, she feels almost new and is gaining back her strength. 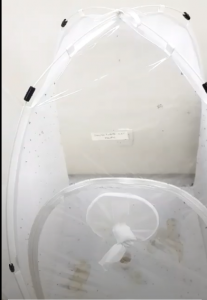 Pakistan has seen a rise in the number of dengue fever cases, genetically engineered mosquito has been mooted as a solution.

But if there is one lesson she has learnt, it is never to underestimate the power of the diminutive flying fly. “I’d avoid going outdoors till it gets cold enough for the mosquito to die,” she said.

It was back in 1994 when dengue was first reported in Pakistan, but it was not until 2005 when the first epidemic occurred in Karachi. Since 2010, Pakistan has been experiencing an epidemic-like situation in three provinces of Khyber Pakhtunkhwa (KP), Punjab and Sindh.

While Lahore continues to battle the dengue virus, things are not looking too good in the port city of Karachi either.

“We are seeing loads of dengue cases. It seems to have replaced Covid-19,” admitted Dr Naseem Salahuddin, heading the infectious diseases department at Karachi’s The Indus Hospital. Those with mild or moderate dengue are sent home with instructions to show up for a follow-up,” she added.

The spread of dengue from Karachi to Lahore and from Lahore to different parts of the Punjab and then to relatively temperate zones of KP in recent years indicate that Aedes mosquitoes have gone through “adaptation to relatively temperate zones”, explained Dr Erum Khan, professor of microbiology at the department of pathology and laboratory medicine at the Aga Khan University, in Karachi. She said climate change, along with a runway population, urbanization and increase in travel and transportation, is stoking it further.

“The severity of the disease has increased, but the government’s input is inconsistent and without any long term disease control strategy,” lamented Khan.

While mortality is high among patients who come in late in the course of the infection, Salahuddin said it was important to keep a close eye on the patient while keeping a “balance” between giving just enough fluid but “not overloading” them with it.

At the same time, while hospitals in Karachi can manage treatment, she feared in future, “cases are going to get more and more severe and bigger and bigger numbers and a time may come when hospitals may become overburdened”.

That is why healthcare professionals like her cannot emphasize enough for the city administration to clean up the city of garbage and pools of water from rain or overflowing gutters and broken pipelines.

Otherwise, warned Salahuddin, there is going to be another health disaster for the public. “Cleaning of the city is our only chance,” she pointed out.

“Given that majority of the population do not know about whether they were ever infected before, the situation in Pakistan can worsen in future outbreaks,” warned Dr Ijaz Ali, a virologist at Islamabad’s Comsats University.

Bad governance, the inability to understand the mosquito’s behaviour or habitat, and refusal to allow research or use established scientific methods in other countries were some of the barriers to controlling the Aedes mosquito population in Pakistan, said Ali.

“Sporadic recurrence of dengue each year and emergence of chikungunya and zika point towards the failure of existing strategies, if any, to control the vector population,” he pointed out.

The government, for its part, continues to spray insecticide across the cities and has, over the years, got better at strengthening treatment and diagnostics. 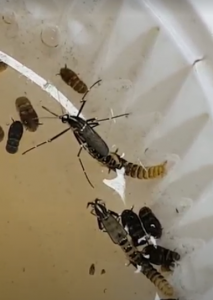 Pupa of the Aedes mosquito developing into an adult. Pakistan has seen a rise in dengue fever caused by the mosquito and the control of the disease continues to be problematic.

But said Ali, the use of insecticides has led to insecticide resistance. He particularly finds the open-air fumigation drives mere “cosmetic” and a “least effective” measure. As for treatment and diagnostics, he said it still did not address tackling the “source” of the dengue infection, the mosquito itself.

He believes a combination of chemical (insecticide spraying), mechanical (mosquito traps placed near and inside hubs of transportation such as airports and bus stations) and biological (with biological a major component) strategies would be best in combating vector-borne diseases in the long run.

For the last 11 years, he has been trying to convince both the provincial and central governments of making “billions of mosquitoes in labs”, which when released in the wild, could reduce the spread of dengue virus, but with little luck.

The released genetically engineered male (only) mosquitoes, when they mate with Aedes females (also the carrier of the virus), would produce offspring that would die while still at larvae or pupae stage, explained Ali, the only Pakistani with a doctorate in genetically modified mosquitoes. In addition, genetic modifications, he said, can also shorten the life span, cause sterility and even death of the transformed Aedes species.

However, those who can decide have dawdled for too long with the result that the virus has gone out of control, he remarked. He has been trying to draw attention but with little success. “They [government officials] tell me if word gets out the government was fighting the virus by letting loose even more mosquitoes, they will have to confront the wrath of the public!”

“Field trials of genetically modified mosquitoes have successfully been carried out in various countries including Malaysia, French Polynesia, Brazil, Australia, Vietnam and Singapore,” said Ali adding the methods have not had any “significant impact on human and animal health or the ecosystem”.

But Safdar remains unconvinced. “Not only can genetic engineering alter the mosquito’s targeted characteristic but can go beyond.” This tampering with nature could potentially enhance the risk of other mosquito-borne diseases or become a source of another nuisance.

“Moreover, interaction of new species with pre-existing vectors in an area of intervention may lead to some new environmental challenges,” that the country may not be ready to battle with.

“I can understand the frustration of the researcher,” said Khan, but since Pakistan is a signatory to the Cartagena Protocol on Biosafety to the Convention on Biological Diversity, it has to keep in mind the “biosafety concerns” on the environment and human health. “There are no clear guidelines so far. Therefore, I believe the government is reluctant,” she said.

While Khan conceded, “replacing GM mosquitoes to reduce disease was a tangible solution”, she remained wary.

“For now, I would recommend more experiments under controlled environment to be carried out to assess the impact on biodiversity before releasing GM mosquitoes in the wild, and because the study is a complex one, it should have a team comprising environmentalists, social scientists and biotechnologist working together as one health concept to get a complete picture,” she said.

But if absolutely nothing is done and the mosquito continues to live on, Ali predicted Pakistan might experience epidemics of yellow fever in the years to come.