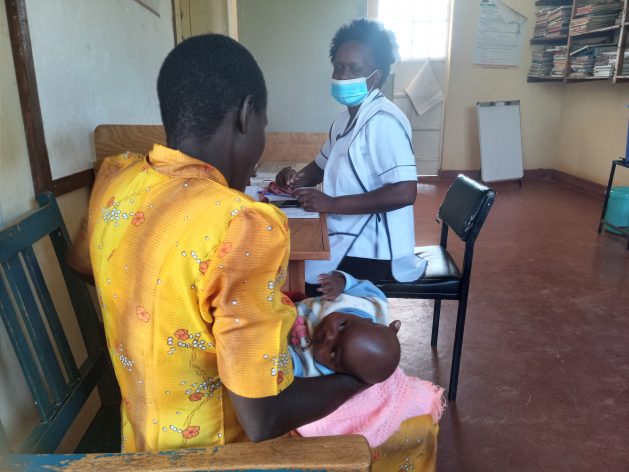 A child health consultation at Obunga Dispensary in Homa Bay, one of the eight counties participating in the malaria vaccine pilot program. Credit: Joyce Chimbi/IPS

NAIROBI, Oct 25 2021 (IPS) - One morning in 2016, Lillian Nekesa’s 3-year-old woke up with flu-like classic symptoms of malaria. This was not Kevin’s first encounter with the killer disease.

Kevin was nonetheless not immediately rushed to Busia County Referral Hospital for advanced treatment in keeping with his severe symptoms.

Nekesa rushed him to a village dispensary because the referral hospital is an hour’s walk away from their home in Mayenje, Busia County.

“Two days went by, and Kevin did not improve, and by the time we got him to the referral hospital, it was too late,” she recounts.

He says malaria is commonplace in Busia, situated near the Lake Victoria region. Malaria incidence in Busia is six times higher than the national average of 5.6 %.

Government estimates further show that counties around the lake region bear the highest malaria disease burden, with a prevalence rate of 19 %.

“Over 70 % of the population in Busia is at risk of malaria, and help is not always within reach, especially in emergencies. We are deep in the village, and the main mode of transport to the referral hospital is a motorbike that charges $2 to $5, which people struggle to afford,” he says.

Malaria is a primary health concern, as per World Health Organization (WHO) statistics. In 2019, malaria caused an estimated 229 million clinical episodes and 409,000 deaths.

Approximately 94 % of these deaths were recorded in the WHO African Region. In Kenya alone, about 3.5 million new clinical cases and 10,700 deaths are recorded annually, according to government data.

Against this backdrop, Dr Bernhards Ogutu, Malaria Lead Researcher at the Kenya Medical Research Institute (KEMRI), tells IPS that RTS,S with a brand name Mosquirix, has the potential to reverse this trend.

It is the only approved malaria vaccine.

Thirty years in the making, he says that Mosquirix is a lifeline for children, especially in rural malaria-endemic areas. He says that children continue to die despite free malaria treatment, largely due to late presentation to health facilities.

Currently piloted in Kenya, Ghana and Malawi, Dr Christopher Odero tells IPS that the vaccine targets infants and young children in Africa because it was developed to build immunity specifically against the plasmodium falciparum.

Odero, a technical advisor and specialist on malaria and vaccines at PATH, says that Plasmodium Falciparum is the world’s deadliest malaria parasite. The parasite is predominantly found in Africa, accounting for about 90 % of the total Plasmodium parasites on the continent. The female Anopheles mosquito transmits it.

He explained that the vaccine would work best in malaria-stricken regions of sub-Saharan Africa region and other areas of Africa with moderate-to-high malaria plasmodium falciparum transmission.

Odero emphasises that even though the reported vaccine efficacy is 40% against clinical malaria, the public health benefits of using this vaccine are enormous. The benefits of using the vaccine, alongside other malaria prevention measures endorsed by WHO, far outweigh the risks.

He particularly stresses that the vaccine is a complementary malaria control tool that should go hand-in-hand with the routine use of insecticide-treated bed nets, indoor spraying with insecticides and timely access to testing and treatment of malaria.

He says the vaccine takes the pressure off resource-strapped health systems as six of 10 vaccinated children with severe malaria would not require a blood transfusion.

In Western Kenya, home to the ongoing pilot program across eight counties, Odero says that the vaccine can reduce the average episodes of malaria attacks per child from five to two per year. A crucial outcome as repeated malaria attacks can have lifelong effects such as chronic anaemia and stunted growth.

This proven capacity to reduce child deaths, severe malaria, and safety in the context of routine use has informed WHO’s policy recommendation on the broader use of the vaccine, he says.

Ogutu agrees, emphasising that the vaccine quality and risk-benefit profile are favourable. The feasibility of implementation, potential public health impact and likely cost-effectiveness of rolling out the vaccine are not in doubt.

Despite the ongoing COVID-19 pandemic, he says that the vaccine has achieved equitable coverage. Ogutu says that at least 250,000 children in Kenya have already received all four recommended doses, and they will remain in the pilot program until 2022.

Ogutu says that there is a need for continued assessment to gather additional information on the vaccine’s effectiveness over a more extended period and assess long-term effects on the community and any other issues that could emerge with routine use of the vaccine.

The ongoing pilot malaria vaccination program is financed through the collaboration of three global health funding bodies: Gavi, The Vaccine Alliance, the Global Fund to Fight AIDS, Tuberculosis and Malaria, and Unitaid.

Additionally, WHO, PATH and GSK are providing in-kind contributions. GSK, for instance, the vaccine manufacturer, will donate up to 10 million doses of Mosquirix. To date, over 2.3 million doses have been administered across Kenya, Ghana, and Malawi.

Ogutu says that the vaccine could be available for broader use in Kenya in the next year to 18 months – a step in the right direction for all children at risk and the coastal areas near the Indian Ocean and Lake Victoria region.
He cautions against vaccine-related myths and misconceptions associated with any new vaccine that could compromise the use of the ground-breaking scientific innovation.

To increase and sustain a high vaccine coverage, Wanjala urges the government to continue supporting the training on vaccines for community health volunteers (CHVs). The CHVs remain the primary link between communities in rural areas and health facilities.