Stories written by Amantha Perera
Amantha Perera is a journalist and foreign correspondent based in Colombo, Sri Lanka. He covers Sri Lanka for a variety of international media outlets. | Twitter | 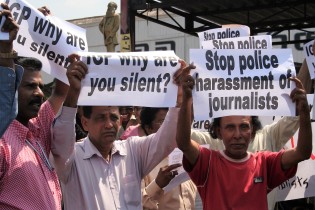 By Amantha Perera
Journalists and media activists have cautioned against Sri Lanka’s newfound press freedom as the country heads to the polls in 2020. Separate incidents of hate-speech against a Muslim minority—and the subsequent shutdown of social media platforms—and the harassment of reporters critical of the country’s opposition have led some to believe that the changes in media independence could reverse.

By Amantha Perera
Sri Lanka is facing the heat from a scorching sun for the past one month. In recent times, the country has imposed power cuts after almost a decade. The main reason was the stoppage at a coal power plant, but engineers at the Ceylon Electricity Board (CEB) admit that the island’s hydro-power generation capacity is at such a critical low that without additional coal, diesel and renewable generation, the country’s full demand for power cannot be met.

By Amantha Perera
Early evening, there is a play of light and shadow over Kathmandu’s famous Durbar Square. The rising monuments, damaged by the April 2015 earthquake, appear as dark silhouettes while large flash lights streak through in between them.

By Amantha Perera
Berta Isabel Cáceres Flores, was in her early 20s when she co-founded the Council of Popular and Indigenous Organisations of Honduras (Cophin), a group that campaigned for the rights of indigenous communities in the Central American nation.

By Amantha Perera
One and half years ago, Johnson, a 20- something youth, hailing from Sri Lanka’s tea plantations, received an unusual request. The caller, someone Johnson knew casually, made an offer for his kidney. “It was for a half a million rupees (around US $3,500),” he said.

By Amantha Perera
The new Sri Lankan government that was voted in on Aug. 17 certainly didn’t inherit as much baggage as its predecessors did during the nearly 30 years of conflict that gripped this South Asian island nation.
Next Page »
ADVERTISEMENT ADVERTISEMENT