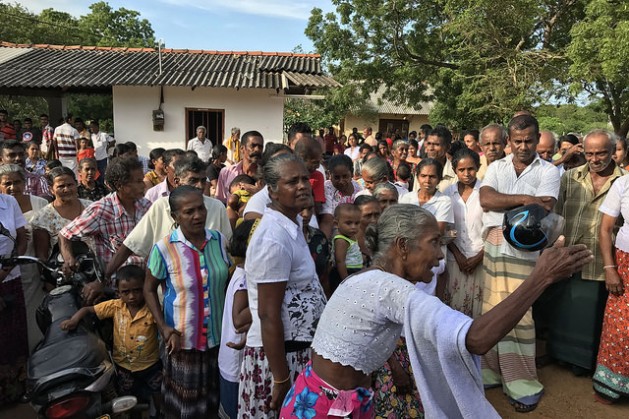 “Over our dead bodies.” Villagers in Beragama, Sri Lanka protest to prevent government surveyors from carrying out mapping due to fears of losing their land. Credit: Sanjana Hattotuwa/IPS

BERAGAMA, Jan 9 2017 (IPS) - Beragama is a typical Sri Lankan rural village, with lush green paddy fields interspersed by small houses and the village temple standing at the highest location. Despite being close to the island’s second international harbour and its second international airport, Beragama appears untouched by modernity.

All that is about to change. There is angst in this hamlet located in the Hambantota District about 250 km south of the capital Colombo. The fear is that a new Chinese investment topping 1.5 billion dollars could gobble up the village, along with an adjacent stretch of 15,000 acres.

“We are not against investments, but we don’t want to lose our lands and homes.” -- Beragama resident Nandana Wijesinghe

The Sri Lankan government of President Maithripala Sirisena and Prime Minister Ranil Wickremasinghe wants to sign a deal with a Chinese company by which the investors would gain controlling shares of the new Magampura Port and a proposed investment zone. The investment is expected to ease some of the burden of a whopping national debt of around 64 billion dollars, 8 billion of which the country owes China. Between 2016 and 2017 its debt payments are expected to in the region of 8 billion.

This is money the government desperately needs to revive a flagging economy. It was so desperate that within two years of taking power, it has turned to the very lenders that it shunned in 2015. Former President Mahinda Rajapaksa had followed a pro-Beijing policy even at the risk of annoying regional power India by its actions.

The new government that replaced it first tried to follow a pro-Western investment policy, even suspending Sri Lanka’s single largest investment project, the 1.5-billion-dollar Colombo Port City. However, without new investments coming in at anticipated rates, Colombo has had to seek China’s help.

“We are not against investments, but we don’t want to lose our lands and homes,” Beragama resident Nandana Wijesinghe told IPS.

The villagers charge that the Chinese want the most fertile land, and the areas close to the port. “Why don’t they take land that is shrub? There is plenty of that,” Wijesinghe said.

When word trickled down that the village was being eyed by the investors and the government was moving to close the deal, the villagers began gathering at the temple. There they decided that they would not part with their land. This was in mid-November.

When surveyors arrived at the village to begin mapping, the villagers stopped them. “We have asked for top government officials from Colombo to come and explain the situation to us. Till then we will not allow any of this,” S. Chandima, another villager, told IPS while others crowded around survey department officials.

Top government officials in the district say that as of the end of last year, there was still no decision on which land would be handed over in a 99-year lease. “Right now we have instruction to do surveys, nothing else. We have no information on what land will be handed over,” said S H Karunarathne, the District Secretary for Hambantota.

Still, protests have been held in Hambantota against the handover, and the tempo is slowly building. A worrying factor for the government is that Hambantota is Rajapaksa’s home turf. He channeled multi-billion-dollar investments here, including the port, the airport (which now serves one flight a day at its peak performance), an international cricket stadium now used for wedding receptions and an international convention center that remains shut. 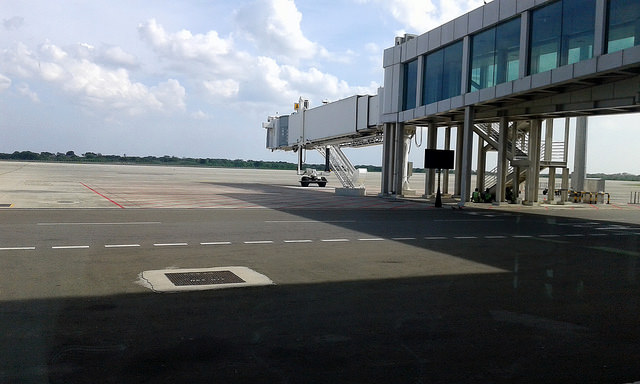 The multi-million-dollar Mattala International Airport, inaugurated in 2013, now serves just one flight per day at best. The Sri Lankan government has been searching for ways to make it a profitable venture. Credit: Amantha Perera/IPS

Rajapaksa, who was the bulwark in getting Chinese investments into Sri Lanka between 2009 and 2014, has said he is opposed to the land handover.

“These are people’s agricultural lands. We are not against Chinese or Indians or Americans coming here for investment. But we are against the land being given to them and the privatisation they are doing,” he recently told Colombo-based foreign correspondents. He added that he had in fact discussed the issue with Chinese authorities during his recent visit to the country.

During the same meeting Rajapaksa said that he planed to topple the current administration in 2017. Once the undisputed strongman in Sri Lanka, Rajapaksa enjoyed unparallel popularity, especially among the majority Sinhala community, after he led the military effort to end three decades of civil war. Despite his defeat two years ago, he has, however, remained a relevant leader to his core support group in the last two years and in the last six months has become more politically active.

He has so far not taken part in any of the anti-Chinese protests in Hambantota, but his eldest son and heir apparent Parliamentarian Namal Rajapaksa has participated in one public protest in Hambantota. Any groundswell of anti-government protests in this southern region could potentially be helmed by Rajapaksa at any time.

The government has already postponed the handover ceremony once, till late January. But Malik Samarawickrama, Minister of Development Strategies and International Trade, has confirmed that deal will go through by the end of the month.

The postponement did not dowse the embers in Hambantota. The opposite happened when the prime minister and the Chinese ambassador came there to inaugurate the industrial zone, and clashes broke out between police and a group of protestors including Buddhist monks opposing the project. The inauguration did take place despite the water canons and the teargas that was flying around — not a good omen for what is to come in the future.