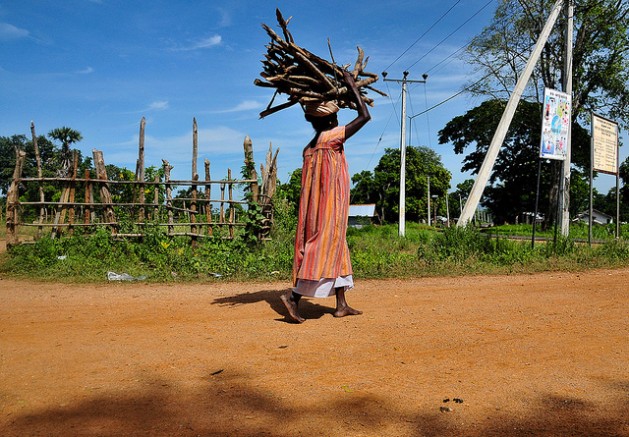 In peacetime Sri Lanka, women still bear a heavy load in looking for jobs and tending to their families. Credit: Adithya Alles/IPS

COLOMBO, May 5 2015 (IPS) - When Rosy Senanayake, Sri Lanka’s minister of state for child affairs, addressed the U.N. Commission on Population and Development (CPD) in New York last month, she articulated both the successes and shortcomings of gender equality in a country which prided itself electing the world’s first female head of government: Mrs. Sirimavo Bandaranaike in July 1960.

After surviving a 26-year-long separatist war, which ended in 2009, Sri Lanka has been registering relatively strong economic growth, and also claiming successes in its battle against poverty and hunger.

"Women also bear primary responsibility for care work – which creates multiple and intersecting forms of discrimination that limits the opportunities for their full integration into the workforce.” -- Rosy Senanayake

Still, it still lags behind in gender equality – even as 51.8 percent of the country’s total population (of 21.8 million) are women, with only 34 percent comprising its labour force.

Pointing out that Sri Lanka has enjoyed significant progress in its social and economic indicators, Senanayake told IPS, it is also one of the few countries in Asia that has a sex ratio favourable to women.

But Sri Lanka’s advancement, in light of changing demographics, will ultimately depend on its ability to enable women and young people to be active participants in the country’s post-2015 development agenda and the U.N.’s proposed Sustainable Development Goals (SDGs).

“This requires an increase in sustained investment targeted at gender equality and social protection,” she added.

Addressing a meeting in Colombo last week, visiting U.S. Secretary of State John Kerry praised the women of Sri Lanka for playing a critical role in helping the needy and the displaced.

“They’re encouraging people to build secure and prosperous neighbourhoods. They are supporting ex-combatants and survivors of sexual and gender-based violence, and they’re providing counseling and other social services. And these efforts are absolutely vital and we should all support them,” he said.

“But we also have to do more than that,” he noted.

“Here, as in every country, it’s crystal clear that for any society to thrive, women have to be in full control – they have to be full participants in the economics and in the political life. There is no excuse in the 21st century for discrimination or violence against women. Not now, and not ever,” Kerry added.

The country’s positive development goals are many and varied: Sri Lanka has almost achieved universal primary education; the proportion of pupils starting grade 1, who reach grade 5, is nearly 100 percent; the unemployment rate has declined to less than four percent: the maternal mortality rate has declined from 92 deaths per 100,000 live births in 1990 to 33.3 in 2010; and the literacy rate of 15- to 25-year-olds increased from 92.7 percent in 1996 to 97.8 percent in 2012, according to official figures released by the government.

U.N. Resident Coordinator in Colombo Subinay Nandy says since the end of the separatist war, “Sri Lanka has graduated from lower to middle income status.”

Referring to the MDG country report produced by the government, Nandy says, Sri Lanka, overall, is in a strong position. The good performance noted in the report has been sustained and Sri Lanka has already achieved many of the MDGs and is mostly on track to achieve the others, he said.

But the negatives are also many and varied.

The proportion of seats held by women in the national parliament “remains very low”; the number of HIV/AIDS cases, despite low prevalence, is gradually increasing; tuberculosis remains a public health problem; there has been an increase in the incidence of dengue fever; and Sri Lanka’s debt-services-to-exports ratio remains relatively high compared to other developing countries in the Asia-Pacific region.

The targeted date to achieve these goals is 2015.

However, a majority of women who participate in the labour force do so in the informal sector.

“This leaves them vulnerable to exploitation and abuse during their course of employment. Women also bear primary responsibility for care work – which creates multiple and intersecting forms of discrimination that limits the opportunities for their full integration into the workforce,” she said.

“As such, we are firmly committed to making the necessary legal and structural investments to bolster a decent work agenda in marginalised sectors,” she noted.

These investments demand a broader discussion on the value of female participation in development.

This includes the availability and promotion of sexual and reproductive health and rights; robust mechanisms to prevent violence against women and girls; and strengthening measures to bring perpetrators of violence to justice.

These, she said, are critical in ensuring Sri Lanka’s ‘demographic dividend’ can be leveraged.

Meanwhile, the introduction of family planning services by the Family Planning Association was well integrated into maternal and child health services and later expanded to reduce the stigma surrounding contraception.

This strategy accounted for more than 80 percent decline in fertility, according to Senanayake.

Additionally, the government of Sri Lanka, through her Ministry, has introduced a scheme that provides a monthly nutritional supplement to all pregnant women in the country to reduce rates of anaemia, low birth weight and malnutrition – which affects both mother and baby.

Still, Sri Lanka faces the problem of unsafe abortions, unintended and teenage pregnancies, which pose significant challenges to the health and well-being of women and adolescents.

In this respect, she said, strengthening comprehensive reproductive education through school curriculum can help young people access accurate information on gender, sexuality, sexually transmitted infections including HIV and increase their awareness on the effective use of contraception.

Currently over 23.4 percent households are headed by women.

To combat these demographic pressures, Prime Minister Ranil Wickremesinghe has set up a National Committee on Female-Headed Households and a National Centre for Female Headed Households – enabling female heads of households to integrate into the workforce and access sustainable livelihoods.