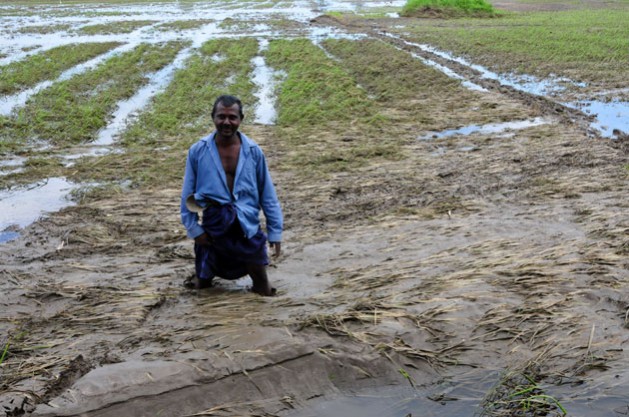 A farmer stands among his destroyed rice crop in North Central Sri Lanka that was flooded in late 2011, leaving many like him debt. Credit: Amantha Perera/IPS

COLOMBO, Sri Lanka, Nov 11 2015 (IPS) - Residents in the Sri Lankan capital Colombo and outlying areas have been waking up to misty mornings of late. A decade ago, regular mist in this area just above the equator would have been a noteworthy event. These days, it is a regular occurrence in some parts north of the capital.

Weather experts contend that the misty mornings are now part and parcel of changing climate patterns that have meant frequent extreme weather events.

“When El Nino takes effect over the Pacific, the South Indian Ocean cools down, and that is what we are experiencing right now,” said L Chandrapala, Director General of the Meteorological Department.

However the El Nino fallout will not be limited to several days of poetically picturesque misty mornings along the new airport highway just out of Colombo. Experts warn that as the year draws to an end, more extreme weather events are almost certain.

While early mornings can be unusually cold, mid-day tempretures can hit 34C. “Weather extremes are here to stay, we need to adapt to them,” Chandrapala said.

Even this year, there are signs that the country was facing extreme weather events in two different regions. While the western plains have been bracing for more rains, the arid dry zone in the northern, eastern and north central provinces have been hit by a prolonged dry spell.

For three months now, the Disaster Management Center (DMC), the main government body that coordinates disaster preparedness and emergency assistance, has been coordinating with regional government bodies to deliver assistance to more than 150,000 persons hit by the dry spell.

Pradeep Koddipilli, the DMC assistant director told IPS that thus far there have no indications that the situation would deteriorate. “We have been delivering drinking water, but so far we have not received any warnings that things will get worse.”

So far the DMC has not been asked to prepare contingency plans for harvest losses or any other economic damages.

If the drought does linger, it would be the second such dry spell in two years. In 2014, a prolonged drought impacted more than 1.8 million people and ravaged 16 of the island’s 25 districts. The vital rice harvest lost around 17 per cent of its annual crop compared to 2013 and the government was also forced allocated 10 million dollars as emergency assistance.

Chandrapala said that past years have shown that with El Nino, rains could increase towards the later part of the year. “We feel the agriculture sector is unlikely to be hit hard since the rains have already started.”

However, if the predicted rains fail, it would put the country’s agriculture sector in a precarious position. The annual monsoon was below par and Chandrapala said that could have brought less than 75 per cent of the annual average.

Experts like Chandrapala say that Sri Lanka needs to have policies in place that take into account frequent extreme weather events.

“It is not something that is optional, it is something essential,” he said. Not only is the agriculture sector suffering from lack policies, lives have been lost as well. In October 2014, 38 lives were lost in the central village of Meeriyabedda when villagers did not get proper warnings on landslides.

In November 2011, 29 died in Sri Lanka’s Southern Province when gale force winds hit the coast. In July 2013, more than 70 were killed in the same region when the onset of the annual South West Monsoon came earlier than anticipated.

DMC’s Koddippli said that Sri Lanka’s early warning mechanism was now better than it ever was. The DMC carries out regular drills and coordinates with its district offices on disaster relief and preparedness levels.

“There is constant vigilance now,” the DMC official said.

Where more work is needed is on building public awareness. Agriculture officials say that Sri Lankan farmers still lack knowledge on how to adapt to changing weather patterns.

“Our farmers have very little knowledge on how to manage water, they still expect the government to provide as much water as they need, that is impossible,” S Shanmuhanathan, deputy director of irrigation at the Northern Provincial Council.

He brings out one simple example, evenly leveled plots. “If the plots are even, water is better managed, but such levelling has to be done before the rains, but our advice is rarely heeded.”

Farmers in Sri Lanka’s paddy belt also have a habit of maintaining six inches of water in an effort to keep weeds out. But Shanmuhanathan said that weeds could be controlled by regular tending.

Chandarapala however said that awareness and policy shifts take time. “It is a slow process, but with events like El Nino, which cannot be ignored, more people become aware of what is happening and what needs to be done.”