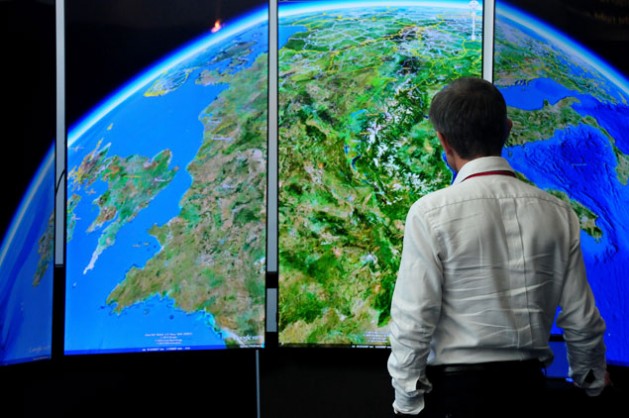 Asian nations fear that the Paris Climate Deal will be a watered down minimalistic product without any teeth. Credit: Amantha Perera/IPS

NEW DELHI, India, Nov 22 2015 (IPS) - On a late Friday afternoon as choking smog descended on the Indian Capital, Francois Richier, the French ambassador to India , took some hard questions from scores of journalists about the upcoming climate change talks in Paris this month.

The journalists were discussing the run up to global climate change Conference of Parties, COP 21, which starts 30th November in Paris and one of the reoccurring sentiments was that this meeting is a done deal and that little if anything would be accomplished. That what would come out of the almost two weeks of discussions, including among state leaders at the onset would be a minimalistic deal that will keep everyone happy. The sceptics among the group even went as far as to say that the Americans were herding world opinion so that Paris 2015 would be President Barack Obama’s legacy.

“We are not supporting anybody,” Richier said reacting to the accusations. He said that France had taken it upon itself to get all these nations, 191 of them, to agree on a single document. Richier admitted that it was a daunting task.

“Reaching a universal agreement is quite a challenge, we are not sure we will succeed.”

But experts based in Asia caution that the Paris deal could end up lopsided in favour of developed nations.

“Actually when you are negotiating climate change you are negotiating economic growth, what you will see in Paris is freezing inequity,” Sunita Narain, the head of the New Delhi based environmental research and advocacy body the Centre for Science and Environment (CSE), told IPS.

What she and many others warn is that while countries agree on self-regulated emission cuts and no binding agreements on results or financial commitments, poorer nations and developing nations like India and even China would find their growth potential curbed if ever such a binding regime were to be set up in the future.

Another concern among those like Narain is that the burden of emission lacks any historical base. All negotiations are done on current emission levels, but experts say that long-life gases like CO2 can remain in the atmosphere for as long as 150 years and historical emissions should be considered when evaluating national emission levels. At 2012 emission levels China leads the list of CO2 emitters at 29 per cent, the EU second at 27 per cent, the US third at 16 per cent and Indian at 6 per cent.

But as Chandra Bhushan CSE deputy director argued, if the time span is stretched to reflect the longevity of the gas, the picture changes. Of all CO2 emissions since 1850-2011 the US accounts for 21.2 per cent, EU 18 per cent, China 10 per cent and India 2.2 per cent.

Bushan said that climate negotiations are essentially, “about economy, not ecology. It is about dividing the carbon budget – how much the world can emit to stay below 2 degrees Celsius.”

But they fear that because of the controversial nature of these issues, they are unlikely to be included in any agreement reached in Paris.

“There is not a hope in hell that mention of carbon budget will survive in the (Paris) agreement,” Lavanya Rajamani, research professor at New Delhi’s Centre for Policy Research (CPR), said, referring to the 55-page draft that is currently in circulation.

Ambassador Richier conceded that any deal involving financial commitments would have to be dealt with outside the main agreement primarily because such a commitment would need US Congress, ratification.

Rajamani also said that the chances of the Paris agreement being pegged to results were minimal. “It is very unlikely to we will have commitments.”

CSE’s Narain too expressed similar foreboding sentiments. She feels that issues like accumulated emissions, carbon budget and strict emission cuts are unlikely to be discussed in Paris. “It is inconvenient (to a lot of the developed countries).”

Rajamani observed that given what is in store in Paris, the Global South should not get its hopes too high and should keep to realistic goals. One is to lay emphasis on the post Paris review process.

Just before the Paris meeting gets underway, the Asian capitals are abuzz that the French are reaching deals with individual countries to make sure they can get a decent Paris deal.

One such visit was Beijing in late October and reportedly the French had reached a deal with the Chinese for a five year review of self set targets. There was no confirmation of any such deal, and the French Ambassador here was equivocal in defending his fellow diplomats’ visits arguing they were needed to keep the Paris negotiations on track.

But both Rajamani and Narain said that the agreement between China and France was for a review that looked at aggregated figures for regions and not individual countries. “We need to strengthen the global stock take far more,” Rajamani said.

Former negotiators however said that global deals will always looks like a letdown since they involved compromises across the board. “Everyone is looking for that little bit of legroom, even that is what India has done, that is the way these things work,” said S B Agnihotri, former secretary to the Indian Ministry of New and Renewable.

The French Ambassador pleaded with the journalists, researchers and activists to give his government the benefit of the doubt, pledging that the concerns of the global south will be addressed.

“Any treaty must address development concerns.”

Whether that is the case, will be known in less than a month.