NAIROBI, Sep 23 2008 (IPS) - At its source in the hills of the Thogoto Forest, the Mbaghati river adds a gushing noise to the quiet verdant landscape. 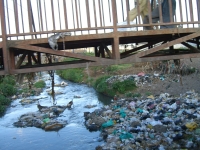 Many residents of Karinde, a farming village on Nairobi’s northern edge, use the cold sparkling water for drinking and bathing. A hillside pool here is used by priests to baptise their followers.

Just downstream, where it merges with other streams to form the Nairobi River and runs through the Kenyan capital, the clear water turns into a muddy brown sewage-like flow, unfit for human use and inhospitable to aquatic life.

It was not always so.

"Older residents of the capital remember a city whose rivers were full of fish, running through an impenetrable thicket of flora and fauna typical of a swamp," says William Wambuga, director of the Botanic Gardens, a project of Nature Kenya, a non-profit organisation working to create public awareness about biodiversity.

Massive urbanisation – Nairobi has grown from 1.3 million people in 1989 to over 4 million today – has taken its toll on the city's environment. Wambuga told IPS that when the Fisheries Department had plans to set up fish farms on different sites on the Nairobi River in 1996, laboratory analyses of water samples revealed increasing levels of pollution leading to cancellation of the project.

Comprehensive sampling to identify sources of pollution was begun in 1999 as part of the Nairobi River Basin Rehabilitation Programme launched by the Kenyan government in collaboration with UN-Habitat, UNDP and UNEP, and funded with money from Belgium and France. The baseline results were reported in a 2005 UNEP report which stated:

The current phase of the project, which finally began – three years late – in June 2008 aims to clean up the river waters and implement projects for solid waste management through a combination of private sector projects for waste management and involving riverine communities in clean-up operations. The plan is to establish long-term public-private partnerships to prevent residential and industrial pollutants from entering the river.

After nine years of this stop-and-start effort, the waters of the Nairobi River and its tributaries remain muddy and inhospitable to species in the water and along its banks.

"If you look at the riverine landscape, it has been impacted for two reasons directly related to urbanisation: one, encroachment and clearing of land beyond the building space, and people using the rivers as their backyards, throwing garbage there. The loss of vegetation and more pollution have also resulted in a reduction of bird population as well as insects at a faster rate than ever seen before," says William Wambuga.

Wambuga laments flawed urban planning and municipal oversight, as well as a lack of environmental awareness among citizens and decision makers alike.

"I look at the newly-built avenues and think that corridors could have been left for the birds and insects native to this place to stay in their habitat. If we continue to clear natural habitats, then we'll be talking about how our agricultural lands are no longer productive and be bringing in the fertilisers when the problem lies elsewhere," Wambuga tells IPS.

"There is a wider economic downside of the loss of biodiversity in the cities. But people do not have the information. There is a missing link between scientific information and people's day-to-day life. That interrelationship ought to be established," he says. "We need to mainstream this subject. All stakeholders in the process of urban development should sit round a table and discuss how to plan the city in a way so as to preserve biodiversity."

He identifies government decision-makers as the key to addressing environmentally unsound urbanisation. In addition to creating awareness among town planners, bureaucrats and developers, Wambuga believes that the education policy both in the formal and the informal sector should be geared to provide the maximum information.

"A lot of information and research is just sitting in the shelves. We need to get it out to target constituencies – school groups, universities and government officials who make policy decisions," says Wambuga. "From places like the Botanic Garden, this information needs to flow down to people."

Spreading the Word One place where the message about the need to preserve endangered plant species is being promoted is at the Nairobi Arboretum. Adjacent to State House, the president's residence, the 101-year old arboretum serves a dual purpose: as both a popular recreational site and a conservatory for botanists and researchers.

On a sunny Sunday, the Nairobi Arboretum is abuzz with activity. Couples can be seen sitting under exotic trees, joggers hurry past picknicking families. At the edges of a cricket game taking place in a small clearing, a group of students from a Langata primary school are intently listening to their science teacher explaining how the silver oak standing above them is special.

The tree is native to the Eastern Province, where craftsmen use silver oak wood to produce carvings of the finest quality. But they have cut down so many trees in recent decades that there are almost none of them left, beyond the ones being cultivated in the Arboretum. The children will soon saunter down the slopes to see the polluted river which crawls around the Arboretum, hidden under a busy Nairobi road.

Constance Muholo of the Friends of the Nairobi Arboretum tells IPS that one of the major activities of her organisation is to engage schools and young students to sensitise them to conservation and environment protection issues. "We arrange lectures in schools, encourage teachers to bring students for visits and complement science teaching which still does not have sufficient syllabi on environmental protection," says Muholo.

"Urbanisation does not have to be a foe of the environment. Cities can grow and expand in a sustainable way. What is critical is for the next generation of city dwellers to be informed and aware of the costs of their actions," she says, stating one of the objectives of her organisation.

This tension between environmental conservation and people's development needs, says Wambuga, can be managed through good planning, urban management and, most critically, proper education.

"We need to get people from point A to B, set definite goals in our education policy and then gauge its impact after, say, three years. We just don't need to talk endlessly about it or merely commemorate special environment days. Tangible results will require tangible measurable policy changes and long-term commitment."