SANTIAGO, Oct 11 2008 (IPS) - As greenhouse gas emissions drive global warming and fuel prices continue to soar, pedalling has come back in style in many cities of the industrialised world. In Chile, as well, public bicycle services, bike routes and special parking areas are some of the initiatives currently being developed. 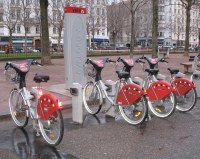 The French city of Lyon was a pioneer in biking as public transportation. Credit: Public domain

“The most efficient, convenient and beneficial mode of transportation in polluted and congested cities is the bicycle,” Amarilis Horta, president of the non-governmental Chilean Bike-Culture Centre, told Tierramérica.

Public concern about climate change and pollution, rising fuel prices and the need for physical activity to improve health are some of the reasons that bike-riding is enjoying a boom in Chile.

Also playing a role in the growing popularity of biking is the frustration with Transantiago, the reformed mass transit system that was launched in the capital in February 2007, and which has not kept up with the public’s expectations.

The bicycle “was originally seen as the worst punishment. Those who had no other alternative were burdened with the karma of having to get around on two wheels. It was also seen as a child’s toy; something they got for Christmas,” said Horta.

The administration, fees and technology associated with these services vary. They usually allow riders to use the bicycles for no more than one hour during their daily commute. They are picked up at one site, or station, and returned to another.

The Biking System promoted by the Barcelona city government in Spain has more than 150,000 registered users and 400 stations with a total of 6,000 bicycles, located near subway stations and bus stops.

In 2007, the European Union approved a regulation that requires adaptations to allow cyclists to take their bicycles on trains. And the European Cycling Federation is working on the EuroVelo project, a network of 66,000 km of bike paths across Europe.

There are some efforts under way in Latin America as well. In Bogotá there are 344 km of bike paths used by 285,000 people. In Buenos Aires, legislation on bicycles and public transportation was passed in December 2007 and is now being implemented.

In Chile, the government of the Santiago Metropolitan Region launched a plan in 2007 to build 690 km of bike routes by 2012 – 550 in urban areas and 140 in rural areas – for a total of 38 million dollars. In parallel, a network of 200 bike parking sites will be created.

Also this year, the metropolitan government presented two bills on bicycle routes in the capital to be developed between 2009 and 2012, especially in neighbourhoods where the air is highly polluted in winter.

The Santiago subway set aside space in four stations that can hold 22 bicycles. The cost for parking one day is 300 pesos, or 0.50 dollars.

A citizen-government working group was created in the Ministry of Transport in July to promote bicycle use. The effort includes representatives from the public and private sectors and civil society.

Surveys about the starting point and destination of urban transit in Santiago show that just two percent of all trips in the capital are made using a bicycle, deputy transport secretary Cristián Navas told Tierramérica.

However, the studies conclude that in “an ideal scenario”, with bike routes crossing the entire city, parking places for bikes and respect for cyclists, the demand would grow at least eight percent. That is one of the goals the government has set, Navas said.

In Santiago, city officials are defining strategic locations for bike parking and studying business models associated with them, he said.

Progress is also being made in other regions of Chile. In addition to carrying out a biking awareness campaign in the city of Concepción, in the central region of Bío bío, to strengthen the existing bike routes, the transport secretariat is planning a “pilot project for infrastructure and promoting bicycle use in mid-sized cities” that can be replicated across the country, he added.

Copepod, Quillota, Rancagua and Valdivia have already designed bike routes, and in the central region of Maule, 10 percent of travel is by bicycle.

The Cyclists Union of Chile, which includes the Bike-Culture Centre and legislators, drafted a bill on use, promotion and integration of the bicycle, which was presented to Congress in early September.

The Centre is organising the 3rd Festival of Bike-Culture, to be held Nov. 9-16.

The Providencia district in the capital will launch Chile’s first public bicycle service in November. Bikes will be available for one hour within the district limits for anyone who signs up to use them.

A private company will run the service, which costs two dollars a month, or 14.5 dollars a year. There will be a total of 100 bikes available at 10 stations in Providencia.

The French city of Lyon began its service Vela’s in 2005. It now has more than 3,000 bicycles available at 350 stations. The goal is to have one station within 300 metres of any point in the city.