PHNOM PENH, Nov 26 2008 (IPS) - With its first trial delayed until early 2009, the Khmer Rouge tribunal is facing another challenge: how to balance its mandate to try only former leaders deemed most senior against pressure to prove its independence by ordering further arrests. 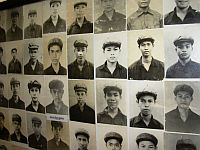 The question of who to prosecute is a complex matter for all war crimes tribunals but particularly so for Cambodia given its fractured history and also the structure of the tribunal; a special chamber within the Cambodian court system comprising local and international judges.

Although further suspects in addition to the five currently in custody have been identified, international and Cambodia co-prosecutors have been unable to agree on whether to pursue them and, if so, how many to investigate.

Kaing Guek Eav, otherwise known as Duch, head of the infamous Tuol Sleng torture centre will be the first of these to stand trial, sometime in early 2009.

The other four are Noun Chea or ‘Brother No 2’ as he was known in the Khmer Rouge hierarchy, former Democratic Kampuchea head of state Khieu Samphan, and former Foreign Minister Ieng Sary and his wife, Ieng Thirith, the regime’s Minister of Social Action.

The sole legal power to initiate the prosecution of crimes allegedly committed during the reign of the Khmer Rouge rests with the Office of Co-Prosecutors (OCP).

Speculation of further arrests increased substantially in mid-June when international co-prosecutor Robert Petit revealed investigations were underway into other former members of Khmer Rouge, and additional defendants could be named.

The timing of the comments, on the eve of a meeting of donors in New York to discuss the tribunals’ budget, was viewed as significant.

“Given the massive and systematic nature of the crimes I think there will be more accused or at least they should be investigated,” Petit told IPS at the time.

“We feel we have the evidence to make a decision, hopefully soon,” he said. “We are all mindful this needs to be a quick process.”

Discussions have since been underway between Cambodian and international co-prosecutors to reach agreement on whether additional suspects should be investigated and, if so, how many there should be.

Although no official information has been released, these discussions are believed to be focusing on between two and six names, on the basis of evidence prepared by prosecution researchers.

The October bulletin from the tribunal’s public affairs unit bulletin stated the OCP has “continued the analysis of evidence to identify further criminal acts and potential suspects for a possible subsequent introductory submission.”

“This process is expected to be finalised in the following few weeks,” it said.

But no public announcement has yet been made and no updated information provided on the status of OCP’s deliberations.

Petit was not in Cambodia and could not be contacted for comment on the issue.

Cambodian co-prosecutors have repeatedly refused to comment publicly on their deliberations.

If international and Cambodian co-prosecutors agree to recommend further arrests, a brief will be put together for the co-investigating judges who will then decide whether enough evidence exists to take the cases to the tribunal.

If no agreement is reached, under the tribunal’s rules the international side can still move ahead by filing a notice of with the five member Pre-Trial Chamber (comprising three Khmer and two foreign judges).

A majority of four is needed to block the move.

Tribunal observers believe international co-prosecutors will do everything they can to avoid taking the issue to the Pre-Trial Chamber and risk signalling a public split between the two sides.

Although there is no formal time limit on when a decision needs to be reached, the observers say in practical terms if additional prosecutions are going to occur the process will need to commence soon.

There are only two conditions guiding the work of co-prosecutors in the agreement between the UN and Cambodian government establishing the tribunal: that those indicated be ‘senior’ and ‘most responsible’ and the crimes committed during the period which the Khmer Rouge ruled Cambodia, April 17 1975 to January 6 1979.

Given the fact that the tribunal is taking place in Cambodia and the presence of ex-Khmer Rouge in so many parts of the society, some in positions of power, the reality is more complex.

Most observers agree former senior government and military officials in the Khmer Rouge regime continue to live freely in Cambodia.

“The prosecution of additional suspects is critical to the ability of the tribunal to give the public a realistic picture of responsibility for a broad range of Khmer Rouge atrocities,” said Heather Ryan, a Phnom Penh observer with the Open Society Justice Initiative.

“Further prosecutions are also necessary to demonstrate that the court is truly independent of political pressure to limit prosecutions to only the most notorious few.”

The expectation of further arrests is also high amongst the Cambodian public given the amount of money being spent on the process, particularly compared to the lack of funding for the criminal justice system generally in Cambodia.

“We agree with the principle of combining justice and peace,” said Thun Saray, President of ADHOC, a local rights organisation who lived through the Khmer Rouge period.

“It is a difficult balancing act. If they can show proof for another four or five arrests and limit it to this then, yes, they should go ahead but limit it to these people.”

“Why concentrate on only the top five when there are others out there?”

However many believe the Cambodian government is keen to restrict the tribunal’s focus to the five currently on trial, fearing that any further arrests could potentially open a Pandora’s Box of additional prosecutions.

The second half of the 1990s saw the government embark on a largely successful strategy of encouraging members of the guerrilla movement to defect, sometimes in exchange for high-level positions in the country’s military and provincial power structures.

Many believe the government is concerned that further arrests could disturb some of these arrangements and create unrest.

“I know the government is worried about this but I don’t see why, ” said Saray. “There is already enough protection in the law to ensure any arrests will not be spread too far.”

Others point out the tribunal is yet to deal with the five senior leaders in custody and additional arrests could risk diluting the tribunal’s resources and focus, as well as donor patience with the process.

Who these additional defendants might be is also not clear.

Most academic specialists in the area are working for the tribunal and not talking.

Members of the Communist Party central committee, those deemed most senior and responsible, are either dead or in custody.

Most leaders of the Khmer Rouge’s zone system, the next level of authority, are thought to be dead, either by natural causes or purges.

While deputy zone commanders would not have given orders, they would have been influential. There is speculation some of them may still be alive.

Another potential pool of candidates is from amongst the ranks of commanders of army groups and security establishments attached to each zone.

In his 2001 book, Seven Candidates for Prosecution: Accountability for the Crimes of the Khmer Rouge, academic Stephen Heder drew on then newly available archival material to present the leaders most complicit in the Khmer Rouge’s crimes.

Of these, Noun Chea, Ieng Sary and Khieu Samphan, are in custody.

Ta Mok and Kae Pok, who as heads of zones directed or otherwise facilitated the arrests of suspected traitors and failed to punish atrocities perpetrated by their subordinates, are both dead.

This leaves Sou Met and Meah Muth who held predominantly military ranks in the Khmer Rouge “just below the senior level, which positioned them to implement party policies and influence the conduct of lower level cadres”, wrote Heder.

According to ‘Getting Away With Genocide? Exclusive Justice and the Khmer Rouge Tribunal’, co-authored by British journalist Tom Fawthrop and Helen Jarvis, currently the tribunal’s public affairs chief, both Met and Muth currently hold senior positions in the Cambodian army.

“One problem with including these two as prime suspects is that it extends the scope considerably beyond the highest bodies of the Centre, raising the question of how many others held equal rank and would therefore logically be included as prime suspects,” the book states.

Potential prosecutions could also arise from material gathered by the prosecution on the detention and interrogation centres run by the Khmer Rouge.

Although Tuol Sleng remains the best known and most important of these centres, it was only one of many run by the Khmer Rouge.

NGO’s doing outreach work with victims of these facilities claim they have collected considerable evidence about their operations, including witness statements about what went on, and have identified former guards.