Q&A: Crises Are Left for Another Day…

ROME, Dec 4 2008 (IPS) - The Doha Financing for Development Conference is over and many are now wondering how it went and what really happened. Sylvia Borren, co-chair of the Global Call to Action Against Poverty (GCAP), was there. 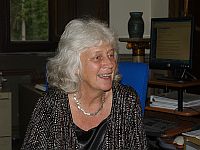 In an email interview with IPS, Borren evaluates the outcomes of the conference from the perspective of civil society.

IPS: What was civil society’s role in this process? SB: Well, the two day pre-conference of the civil society was rather good. We had enough expertise in our networks and 250 people attending to have well-researched argumentation in the room. And we put together a solid civil society paper of improvements and additions on all issues for our governmental delegations.

The official U.N. meeting opened against the horrific backdrop of the Mumbai attacks with blood and violence on our TV screens. It proved that no ‘war on terrorism’, masculine competition and a ‘winner takes all’ mentality can stop terrorist or violence.

A press conference gave us the opportunity to hand over our input to the president of the General Assembly (Miguel d’Escoto Brockmann), who gave an impassioned speech about the urgency of putting need above greed, and changing paradigms in our world. He spoke of our input in his opening speech to the General Assembly the next day where Gemma Adaba from ITUC (International Trade Union Confederation) was our strong civil society voice, high on the five-minute speakers list.

IPS: What were the governments’ contributions? SB: French President (Nicolas) Sarkozy, holding the EU presidency, made a strong plea for urgent solutions, especially for Africa. But for me he was too ‘pro’ his own G20 initiatives and rather ‘divide and rule’ towards the G77 as well as the EU, in stressing the French bond with Africa. His proud claims about 60 percent of official development aid coming from Europe and the extra 1 billion euro for the food crises made me snort cynically…

Yes, 60 percent of about 100 billion euro. And the French are still not near reaching their promised 0.7 percent of GNI (Gross National Income) for aid or supporting unfair trade practices. He didn’t mention the 260 billion euro which the EU just approved for stimulating the economies of Europe itself: encouraging consumerism in order to keep production going. Save the car industry, who cares about climate change.

The U.S. delegation was the same, they kept boasting about being the biggest bilateral aid donor, and having doubled that in the last eight years. As it was only 0.16 percent of their GNI in 2007, and they have never committed to the 0.7 percent – they too were walking on thin ice. After all twice (nearly) zero remains (nearly) zero.

Strong speeches came from the two special envoys to this conference: the development minister from Germany, Heidemarie Wieczorek-Zeuland, and the finance minister from South Africa, Trevor Manuel.

IPS: How did the negotiations go? SB: The six roundtables started badly, with civil society invited but given virtually no airtime. Only on the last day the roundtable on systemic issues allowed some real input and dialogue.

The side events suffered from having too many speakers, but were very good. My favourite was on Decent Work, chaired by Mary Robinson, with a great lineup of speakers: ambassadors from Norway and Bangladesh, multilateral institutions, UNCTAD and more civil society input. We also had a great dinner with UNIFEM – arguing about needing a new U.N. women’s conference in 2010… It needs to be about designing and implementing transformational gender strategies, as well as exchanging notes on stopping violence and making more inroads with quotas and gender mainstreaming.

Contact with official negotiations was mostly bad news. The paragraphs on climate change and tax evasion were tricky, some found there to be an overdose on gender… But the main fight was about where the follow-up process was to be placed. There were strong attempts from the (George W.) Bush administration on its last legs to ensure that the responsibility for redesigning the financial architecture of the world stayed with the Bretton Woods institutions, and in the hands of the G20.

IPS: But the heads of the IMF and the World Bank didn’t even show up… SB: It illustrates their lack of respect for the U.N. and the developing countries. Their standard recipe is cutting down on governmental spending and keeping education, health and wage bills low, keeping the next generation stupid and poor. The IMF now wants to sell its gold to pay its oversized staff, but would not consider that to solve the food crisis or to invest in local agriculture. Giving this responsibility to the IMF for me it is like letting a wife-beater back into the house.

Sharing power in a world clamouring for inclusive democracy at the U.N. level is obviously not easy for the rich countries. But it is exactly the power of money, rather than putting people and values at the centre, which has got the world in this mess – what I call a moral crisis.

IPS: So, what was the decision on the follow-up? SB: The G77 wants to be involved in the follow-up (of the Doha conference), for which this process must stay in the hands of the General Assembly of 192 countries. Europe first backed the G77 completely, but threatened not to hold a steady line, not to challenge the U.S. enough, and started to favour some developing countries above others.

I heard that this is the usual U.N. pattern: First, lots of agreement, just a few paragraphs to solve. Europe starts supporting the developing countries. Then, the U.S. goes for the lowest common denominator, threatens a veto and a failed conference. That forces compromises in which Europe gives in too much. And finally a rather weak result, which the global south is not very happy with.

We as civil society got so frustrated on the second day that we staged a quick action with two ballot boxes, asking delegates what they voted for: ‘democratic people centred development’ or ‘Bush & Co’. We got quite some attention – and we heard later that this had quite an impact in isolating the U.S.

IPS: What were the concrete outcomes? SB: The end result of four days was back to the original text: ‘The U.N. will hold a conference at the highest level on the world financial and economic crisis and its impact on development’. On content the outcome document is not too bad, reaffirmation of Monterrey’s agreement to eradicate poverty, no slippage on the volume of aid, better gender and decent work language, a little advance on stopping tax leakages and acting on climate change.

But many issues were referred to the next conference – with a different and hopefully more democratic U.S. player at the table.

IPS: So, was it a victory for civil society? SB: But do we have time for these kinds of power battles? It took most of the U.N. energy during the four days, which should have been spent on the real issues, the urgent crises, and on working towards solutions with the corporate sector and civil society. In this sense it was very much ‘business as usual’- although every speaker claimed it was not.

What a result – four days spent agreeing to another expensive U.N. meeting.