NAIROBI, Jan 19 2009 (IPS) - As the eagerly awaited recovery in tourism after the election violence in Kenya takes off, bad news has come in the form of corruption allegations. 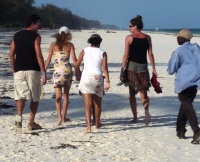 Before tourism minister Najib Balala left for the United States earlier this month to market his country to wary U.S. visitors, he had to act against alleged corruption within the Kenya Tourism Board. Its long-serving managing director, Ongong’a Achieng, has been sent on forced leave and replaced with Maryanne Ndegwa, an investment manager.

The objective of the ministerial action, his office tells IPS, is to ‘‘recover 35 million shillings (some 500,000 dollars) lost from the coffers of the board’’.

The Kenya Tourism Board’s mandate is to promote the east African country internationally as a tourist attraction—a task more urgent than ever in the wake of the end-2007 and beginning-2008 season, hit as it was by weeks of political and tribal violence leading to mass diversion of European and U.S. tourists.

Ironically, the scam involves foreign holiday trips by board officials. The corruption scandal compounds Kenya’s tourism troubles. Revenue from tourism last year fell by 54 percent compared with 2007 which had seen a record number of up to 1.8 million tourists coming to holiday in an apparently politically stable and fast-growing country.

‘‘Back then things looked so good that we made additional investments in anticipation of a bumper year in 2008,’’ reminisces Lacty de Sousa, general manager of an international tour company called Rhino Safaris.

Among other things, his company bought eight new land cruisers to meet the peak New Year season demand in 2008. These stand idle, parked outside his office.

All tour plans were shattered when catastrophe struck on the penultimate day of 2007.

After many years of a smooth political transition, having passed peacefully through a contentious constitutional referendum in 2005, and estimated economic growth of six to eight percent—to which tourism is the third largest contributor—Kenya suddenly plunged into a two-month long fit of organised ethnic killings.

Over a thousand people were left dead and 350,000 displaced.

Most tourists booked for that period did not arrive or diverted to some other destination. Those already in the country left.

Thanks to former United Nations chief Kofi Annan’s intervention, political rivals decided to mend fences soon and by the middle of 2008 the industry had recovered slightly. But it was still down by 32 percent against the same period in 2007. Hundreds of lodges and hotels remain closed. Many more Kenyans have lost their jobs.

But de Sousa argues that, rather than last year’s political violence, the bleak outlook in 2009 is more due to the global financial meltdown and Kenya’s inability to market itself.

‘‘Not even one foreign tourist was hurt or touched in the post-election violence. The country has regained a semblance of stability and remains a hospitable place for foreign tourists. But not many of them are taking holidays, in any case, as the financial crisis restricts their mobility.’’

The worst-hit by this, he says, are those at the bottom of the tourism industry’s chain—waiters, drivers, bartenders, guides —who lose often the only means of subsistence for them when they lose their jobs.

Given this dismal picture, it was puzzling to find at Christmas and New Year that almost all the main lodges and resorts were fully booked. Surely, the tourists have come back!

Julie Hamon, a marketing executive from Paris, was on the last flight from France that landed at Nairobi’s Jomo Kenyatta Airport on December 30, 2007 before violence engulfed Kenya and tourism came to a virtual halt.

She, like hundreds of others planning to spend their New Year holidays in Kenya, was never able to leave the airport and diverted to other destinations. This year she’s back again.

‘‘Nobody had foreseen what happened last year. But it seems to be an aberration and I find Kenya as hospitable to foreigners as ever,’’ she tells IPS.

Other signs, such as failed attempts to make reservations at any of the better known safaris and hotels and ever-rising transport and accommodation charges, also point to the fact that tourists are coming back.

In the third quarter of 2008 more than 5.65 million tourists arrived in Kenya and the numbers are likely to be even higher for the November 2008-January 2009 period. But tour operators argue it does not as yet represent a full recovery.

‘‘There are two reasons why, despite the comparative downturn in foreign arrivals, it is hard to find a booking in most resorts at this time and the fare remains high,’’ explains Winnie Wanjiru of major tour operator Imperial Travel.

‘‘Many of the hotels and lodges that closed last year have either not reopened or are doing only part-time seasonal business. So, there are fewer options for tourists. Secondly, a greater number of local Kenyan residents have to some extent filled the gap left by western travellers.’’

In terms of revenue, however, she explains, local customers do not generate as much as foreigners would. Fees for park entries, safari drives and hotel charges are much lower—in some cases, 100 percent lower—for a local tourist than for a foreigner.

Like de Sousa, Wanjiru is also hopeful that the recession in tourism is temporary. Both of them think that the fundamentals of the industry are sound.

‘‘We have a culture and an economy conducive to tourism,’’ enthuses Wanjiru.

She believes that, other than the unmatched beauty of Kenya’s safaris and mountain and beach holiday resorts, its public culture of hospitality guarantees that tourists stay for longer. ‘‘The fact that even during the worst phases of the violence no tourist was harmed or faced any threat reflects the Kenyan people’s friendly attitude towards foreigners.’’

‘‘The country’s image as a peaceful place was badly dented and then the global economic recession hit us, so the industry is in special need of an enabling regulatory framework – of pro-tourism government policies,’’ explains de Sousa.

‘‘Above all, Kenya has to rebuild its image. Only better and sustained marketing round the world can bring back the number of tourists back to where we are used to seeing it.’’

That it has survived in a post-conflict milieu and keeps going even during the worst global recession in several decades signifies Kenya’s strength in this sector.

However, as the main governmental body tasked to market Kenya abroad remains embroiled in stories of corruption, it may take a while before the country bounces back to its full tourism potential.