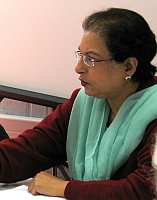 It is the first group to undertake an investigation of this scope with 16 hearings covering 40 countries over the past three years.

The group will launch its report ‘Assessing Damage, Urging Action’ at a press conference in Geneva on Feb. 16, followed by a high-level presentation at the U.N. The report provides guidance to combat terrorism and urges states and international bodies to restore the primacy of international law.

Jilani, along with the late justice Dorab Patel and lawyer Asma Jahangir, is among the founders of the independent Human Rights Commission of Pakistan (www.hrcp-web.org) in 1986. She was appointed to the U.N. international fact-finding commission on Darfur in 2006, and was the U.N. special representative of the secretary-general on human rights defenders, 2000-2008.

IPS correspondent Beena Sarwar spoke with Hina Jilani in Lahore, over the phone, just before she left for Geneva.

IPS: What are the most significant findings of the Eminent Jurists Panel on Terrorism, Counter-terrorism and Human Rights? Hina Jilani: I think one of the most important points to underscore is how much damage has been done and will be done when states deviate from the law and human rights principles in the name of terrorism. At the same time, we recognise that actual armed conflicts are arising from terrorism.

Another important point to make is that we looked at the political history of countries that have been dealing with this problem and resolving it through the regular criminal justice system, like Northern Ireland and Latin American countries like Chile and Argentina.

Firstly, there is the issue of the right to a fair trial. Secondly, we are very aware of the reality of the terrorism threat but the way governments have reacted – bypassing the criminal justice system – has clearly failed to be the right strategy.

There is a need to follow the due process of law and it is also absolutely necessary to have a successful prosecution of terrorist crimes. Because when you try a crime through the regular criminal justice system you strip the crime of its ideology, and the criminals can’t confuse the public mind and influence public opinion with the righteousness of their cause.

IPS: So the terrorist act itself gets shorn of ideology? HJ: What this does is that it highlights the crime itself. The victims get a face and become visible during a trial, and public opinion becomes realistic. This incidentally is also the reason you don’t ‘disappear’ people.

So we have taken a very victim-oriented approach so that the victims are seen as human beings, given reparation and compensation. There is the question of non-state actors also – in most cases, it is non-state actors who are involved in acts of terrorism, very few governments are.

IPS: What are the other highlights of your report? HJ: We’ve underlined the need to back cases with proper intelligence. The lack of proper oversight and accountability of intelligence agencies is a big problem. Of course a certain amount of secrecy is necessary, but without proper oversight and an accountability process we find that intelligence agencies go out of their way to make a case. This contributes to creating a situation of lawlessness.

We also found that intelligence agencies in different countries collude with each other in such situations. And then intelligence seeps into other areas, like immigration laws. So you have situations where people crossing the border illegally are apprehended as terrorist suspects.

Intelligence agencies collude to maintain secrecy and cover up when they step outside the law. We are saying they should do that to create better intelligence and mechanisms for cooperating in other ways.

Basically, the most significant thing that we highlight is the importance of due process, the right of every accused to know what evidence is being used against them – which doesn’t happen when secret evidence is brought into play. Because of this, several hundred people are detained without charge because there’s no evidence or intelligence against them, in Guantanamo and other places.

IPS: So the bottom line is that governments need to operate within the existing human rights and legal frameworks? HJ: Absolutely. All the internationally recognised human rights conventions already cater to dealing with the restriction of rights. Where limitations are necessary they prescribe the process and time limits etc. What we are saying is that you can control terrorism while applying the human rights frameworks and guarding human rights at the same time.

When force must be used, the predominant concern has to be due diligence to safeguard human lives. In Pakistan, for example, if force has to be applied, it must be proportionate and responsible, there has to be transparency and accountability to the elected parliament. It must conform to international human rights laws. There must be a definite and precise authority through which the force is ordered.