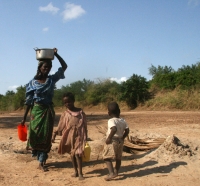 'Women have been marginalised and unfairly treated when it comes to the issue of dividing property, including land.' - Opondo Credit: Justin Mwelu/IRIN

The adoption of the draft policy on Jun. 25 signalled the first step towards a blueprint on how land issues are handled.

Women’s rights activists have been following the process closely, arguing that the document needs to spell out radical measures to correct a legal framework that has denied women access to land and property rights.

More than 70 percent of agricultural labour is supplied by women, according to the government’s figures, yet just less than five percent of women own land.

Evelyne Opondo, a senior programme officer at the Federation of Women Lawyers – Kenya (FIDA) has written extensively on the gender dimensions of land rights in Kenya. Excerpts of her interview with IPS follow.

IPS: The draft NLP has finally been adopted by cabinet. What does this mean for women? Evelyne Opondo: If you look at the document, it recognises that women have been marginalised and unfairly treated when it comes to the issue of dividing property, including land.

For example, the NLP proposes a lot of changes to the Married Women Property Act of 1882, which is a remnant of the British colonial rule and is still the one in use to adjudicate over matrimonial property cases. It fails to protect women’s interest in matrimonial property if it is in the man’s name, regardless of whether the woman contributed to (paying for) the item.

Women have lost property including land through this law in cases of divorce, separation and even death of the man.

Importantly, it notes that there are customary laws which have been used for a long time in Kenya; some of them are laws that have negated the rights of women. The draft policy recognises the need to do away with such laws.

IPS: How are you addressing cultural beliefs and patriarchal attitudes that women should not own land? EO: FIDA, in conjunction with other civil society organisations like the Kenya Land Alliance, has been doing a lot of public education and awareness campaigns. We have gone round the country to all the eight provinces disseminating the contents of the draft NLP.

And this we started in 2007. We are talking about the issues – be they gender or administration of land – and that is something we continue do until now.

The stage at which the land policy is right now, the buck really stops with parliament, not the public who harbour these attitudes. Because once parliament adopts it, that is final, it does not go back for any further review.

IPS: How do you ensure that once parliament passes the document, the suggested reforms in land laws will target the injustices to women? EO: We as FIDA have launched (in June) research we did on women, land and property rights in Kenya. In this research, we have identified the land problems women faced in this country. Having identified the problems, we then went to document the changes we need as a country to rectify the situation; and at the end of it, we have drawn up a bill, which we are calling the Land Property Bill.

One of the things the draft NLP is consistent about is the need to change land laws. And it identifies other gender issues that should be addressed within these laws. So we have taken steps and drafted what the law should look like when it comes to women and land.

The bill fits within the stipulations of the draft NLP, and we have shared it with the ministry of lands, whose head, the minister believes in reforms. It is something we are going to use for purposes of lobbying further and educating different sectors on what we mean exactly when we talk about land issues and injustices to women.

IPS: What measures are in place to ensure that draft NLP is not mutilated by Parliament as has happened previously to other instruments seeking to address other forms of gender inequality? EO: There is a possibility that Parliament may want to water down some of the strengths of the document or some of the parliamentarians may not be willing to let the policy pass. We are cognisant of that and we have been creating awareness among members of parliament, particularly working with the Kenya Women Parliamentary Association, but we are seeking to reach out to the wider parliament, especially through the committees such as the legal committee.

But also it is important to put the whole land question in context with last year’s post election violence and conflict. Because land was identified as a long-term issue that must be addressed in order for Kenya not to have repeat (the violence).

So we are hopeful that the parliament will treat discussions on the draft NLP with seriousness because if land reforms are not addressed, that means we are likely to go back to violence.

IPS: Can we celebrate that the NLP has made a first step? EO: Yes we can celebrate that the draft NLP will change the strength given to some of the customary laws, and other constitutional provisions that have denied women access to land and property.

But the key issue is implementation, because the policy is just something to guide how issues of land can be handled; it is not something that we can enforce. That is why the next stage is critical to us – we must have laws and they should come out categorically against these customs that negate women’s rights.

When this policy is passed, there is a lot of awareness-raising that still needs to be done for the general public, but also for the land boards, the magistrates to give out rulings based on what the new land laws. Remember the government officers that we will be working with, say in the land boards after the new policy comes to play, are the same ones that were in the old regime, so their mentality may not have changed.