LUSAKA, Sep 22 2009 (IPS) - The economy’s down, the price of fertiliser’s up. And Zambian farmers are stealing sewage for their vegetable gardens. 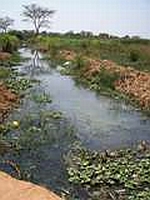 Farmers dig canals like this one to lead waste water directly to their gardens. Credit: Lewis Mwanangombe/IPS

Yes, raw sewage is a cocktail of germs that can cause life-threatening illnesses. Sanitation officials in both Lusaka and the Copperbelt province are accusing peri-urban farmers of creating epidemics by nourishing their crops with foul water and partially-decomposed human poo.

But Irene Moonga, a sales assistant at one of the agricultural companies in Lusaka, sympathises with farmers trying to make a living as the price of fertiliser has risen over the past two years 58 dollars for a 50 kilogramme bag.

And as Zambia’s economy stumbles in the wake of fallen copper prices, hard-pressed consumers in urban centres are having to depend more and more on vegetables as their main relish.

A sackful of leaves from the rapeseed plant, treasured by Zambians as a table vegetable, costs as much as 30,000 Zambian kwacha ($6.50) wholesale at the fresh produce market where middlemen who buy from the “sewerage farms” bring the vegetables for onward sale.

Rosemary Mwamba, a market woman at Kaunda-Square Market in Lusaka, says they do not ask where the produce – rape, beans, green maize and sugarcane are among the vegetables being grown – is coming from before they decide to buy from a farmer.

“We are driven more by the quality of the vegetables. If the leaves are fresh and big then we buy. In any case, even if we were to ask questions I don’t think that would help us, because if a person knows they are selling something bad they will not tell,” she observed.

There are a number of techniques for composting human waste to produce fertiliser. In Malawi, for example, farmers add wood ash and soil to faeces and urine, producing fertiliser over a period of six months.

But the addition of ash and the composting time are crucial to the elimination of harmful micro-organisms. The Zambian farmers growing vegetables near municipal waste plants are simply dumping fresh, untreated waste on their crops.

“It is because of this that under the Food and Drugs Act it is a big offence for one to use raw sewerage to water vegetables that are going to be sold to members of the public,” Bwalya added.

“They will puncture the sewer pipe as it traverses a vacant lot and use the raw sewerage to water and fertilise their vegetables,” he said.

The managing director of the Lusaka Water and Sewerage Company, George Ndongwe, failed to respond to inquiries about the extent of the problem in the capital, but an official at the utility, speaking on condition of anonymity, explained that the company is engaged in a “Tom-and-Jerry” game with the farmers.

“The moment they see our men at the sewerage ponds, these people bolt into the bush only to return after we are gone. To access the water, they first vandalise the settling ponds and the sewer pipes in order to tap into the raw effluent,” he said.

Margaret Zulu, spokesperson for Kafubu Water and Sewerage Company which manages potable water and sanitation on the Copperbelt, admits that vandalism of sewer pipes and ponds to hijack waste is a big headache for the company.

“Every once in a while we join hands with the councils to slash all the vegetable (gardens) using raw sewerage and clear the illegal farmers from the area, but they always come back. With cholera a persistent threat, we have to be on guard, especially now when we are going towards the rain season,” she explained.

Since 1991, Zambia has suffered regular cholera outbreaks, typically occurring at the start or in the middle of the rainy season that lasts from November to April.

Most of the recorded cholera cases – often in excess of 10,000 each year – occur in the unplanned settlements of Lusaka.

But it’s interesting to note that last year’s epidemic, for example, did not start in either Lusaka or the Copperbelt where many eat the waste-fertilised vegetables, but in fishing camps in Mpulungu district of Northern Province on the shores of Lake Tanganyika before spreading to high density locations in Lusaka and Kitwe.

Farmers seize on this to justify continuing to use raw sewage in their plots, though cholera is only one of a host of potential diseases. Farmer Samson Zulu, who has a vegetable patch at the foot of Lusaka’s Kaunda-Square settling ponds, is unrepentant.

“What do they want us to do? We have families to look after and this government, even the one that was there before it, have failed to give anybody a job,” Zulu declared bitterly.