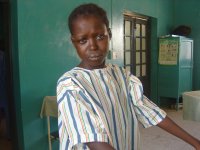 "Expectant mothers in Africa, of all pregnant women in the world, are worst off. An average African woman has a chance of one in fourteen of dying during pregnancy or child labour," says human rights and health researcher Ebenezer Durojaye.

Durojaye, a Nigerian working at South Africa’s University of the Free State, told IPS that the situation in Sierra Leone is even worse. "Here, a woman has a chance of one in eight of dying during pregnancy and labour. In countries like Singapore, for instance, the maternal death risk is one in 3,000," he explained.

Durojaye was speaking at the 19th World Congress by the International Federation of Gynaecology and Obstetrics (FIGO), in Cape Town, South Africa. The event, which runs from Oct. 4-9, is being attended by over 2000 obstetricians, gynaecologists and health experts from around the world.

"The situation in Africa is an outright nightmare and a monumental tragedy," Durojaye said.

FIGO president Dorothy Shaw said that while some African nations have made progress over the past years, the situation remains dire.

"We can unfortunately say that the overall situation in sub-Saharan Africa with regards to maternal health has not improved," she told IPS, referring to FIGO's 2009 world report on women's health, which was launched at the conference.

"Of the 529,000 maternal deaths world wide that die each year during pregnancy and child labour, half lived in sub-Saharan Africa," she continued.

The target for the Millennium Development Goal on maternal mortality, aims to reduce the ratio of maternal deaths to live births by three quarters; the report shows that the number of maternal deaths in the region has declined, but by just 0.1 percent per year between 1990 and 2005.

There are numerous reasons behind Africa's continuing high maternal mortality rates, including poor access to medical facilities that offer obstetric care as well as a shortage of skilled health care workers.

A recent survey conducted by Ethiopia's ministry of health, the World Health Organisation (WHO), the United Nations Population Fund (UNFPA), the United Nations Children's Fund, found that the country's population of 80 million is served by just 133 gynaecologists, 147 general surgeons, 569 midwives and some 5,000 nurses.

"Four percent of hospitals were found to be equipped to do caesarean sections, with two percent of hospitals being able to offer blood transfusions," explained Muna Abdullah, a reproductive health officer at UNFPA's office in Ethiopia’s capital of Addis Ababa who was involved in the research.

"None of the clinics were equipped to provide these more comprehensive obstetric services," she said.

The report also showed an unequal distribution of health care workers and facilities, Abdullah added. "Only three hospitals and 94 clinics were situated in rural areas where the majority of the population lives."

"If we want women to live, we need to make sure they have access to the necessary medical services. The right to health care should apply to all women, not only to a few. These inequalities are a massive human rights violation," Abdullah said.

Shaw added that there is a lack of political will to allocate resources to maternal health care. "Many governments are promising to do better, but these pledges have yet to be met by action and resource allocation. If this is not happening, the statistics will never improve."

According to Daisy Mafubelu, assistant director general for family and community health at the World Health Organisation (WHO), gender-based discrimination is another important factor that kills pregnant women.

"In many parts of Africa, women have a lower status when compared to men," she explained to IPS.

"In Nigeria for instance, a woman requires permission from her partner to go to the hospital to give birth. Many women therefore stay away from clinics and hospitals. These gender based inequalities need to be addressed – by governments as well as civil society and the public – if we want to save lives."

Durojaye acknowledges the situation in his home country. "My government is not doing enough to protect women's human rights, including their right to life, good health and dignity," he said, noting that the maternal death risk in Nigeria is one in eighteen. "If men would be dying en masse, would the government also keep their hands folded like they do? I don't think so!"

Shaw underlined that improving obstetric care in Africa should not only be about preventing maternal deaths. "Thousands and thousands of women each year suffer from injuries and disabilities related to labour and pregnancy complications. Obstetric Fistulas for instance," she explained.

A fistula occurs during labour, when extended pressure of the baby's head damages the soft tissue in a woman's pelvis. "The tissue eventually dies from the lack of blood supply, rots away, and creates a hole between either the rectum and vagina or between the bladder and vagina," explained Shaw.

"This causes a woman to lose control of the flow of urine and faeces.  This often leads to social exclusion and divorce by their husbands. We need to think of their human rights too."