NDOLA, Zambia, Nov 23 2009 (IPS) - When Obed Mumba first came to the Zambian copper mining town of Ndola in search of work, it was still known reverently as “Ku kalale” – the land of the white man. In the decades since, he has witnessed his Kabushi township outgrow the limited dreams of its planners. 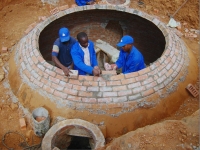 Now 56, he is affectionately known in the Kariba section of the location as “Ba Shikulu-Mumba”, Grandpa Mumba. The neighbourhood was built in the 1940s specially to accommodate single men like Mumba, who came to Ndola from the northern region of Luapula to work in the Bwana Mkubwa Copper Mine.

Kariba comprised 130 housing blocks of six rooms each that were the envy of many native workers at the time. The changed fortunes of the town are felt keenly here, as the bright young men of today have quickly learned that it pays to follow revered sons of the city like Frederick Chiluba and Levy Mwanawasa (both former presidents of Zambia) to Lusaka, where fame and money are more readily found.

Established in the 1940s, Kariba section was built specially to accommodate people like Mumba who came to Ndola from Luapula as a single and eventually found work with Bwana Mkubwa (which means Big Boss).

This section comprised 130 swanky new housing blocks of six rooms that were the envy of many indigenous workers of the time.

But in the years since the rules preventing miners’ families from living with them were cast aside, each room became living quarters for a family of five or more. Shacks, known locally as “cabins”, were thrown up to house teenaged sons and daughters and extended family members.

The original sanitation arrangements, eight communal ablution blocks, each designed to serve 100 people, were soon overwhelmed. By the early 1980s the communal showers and toilets were completely abandoned.

“We had to dig shallow pit latrines near our houses and children who feared to fall into them began to defecate in the open. The whole place began to smell terrible with flies everywhere,” Mumba, who today runs a small grocery store, recalls.

Among those who had left Ndola to make his career was Bernard Phiri. He had risen to become chief executive officer of the Kafubu Water and Sewerage Company, responsible for the town’s water and sanitation, when in 2007 a non-governmental organisation from Germany established links with the Water and Sanitation Association of Zambia.

BORDA, the Bremen Overseas Research and Development Association, had been working on biogas projects in India since the late 1970s, and was interested in setting up a pilot project in Zambia.

Kabushi township was chosen for the pilot for a decentralised wastewater treatment system, intended as a waste and energy solution for a poor neighbourhood lacking sanitation. The system depends on bio-digesters to process human waste to give off methane gas.

A bio-digester is a reservoir – typically round – built out of burnt bricks and mortar or plain concrete with two vents fitted with valves. Through one vent, raw human waste flows in, which is hungrily fed on by bacteria, until out of the other flows an odorless, biodegraded slurry that can safely be used as manure in a vegetable garden.

Methane gas released by the bacteria collects at the top of the structure’s convex roof, and is piped away to feed stoves in the nearby homes.

Five hundred forty-seven toilets were constructed by Kafubu in Kabushi. “These are pour flush toilets with an integrated shower. The water supply is metered and the effluent from 156 households feeds the two biogas digesters that have already been constructed,” Phiri explains.

Waste not, want not

Each household is expected to pay for the piped water used in the toilet, kitchen and shower – billed at a rate of 59,200 Zambian kwacha – just under $13 – for 38 cubic metres of water.

Ba Shikulu-Mumba is one of the 30 grateful homeowners who has been connected to the gas network. He says it is much cheaper to cook on gas than on charcoal.

As more digesters are built in the area, the plan is to connect all the houses as raw sewerage is expected to come in from more affluent neighbourhoods.

The Kabushi project is the first integrated water treatment system in Zambia, and has already been copied by four of the country’s ten other water utilities.

Bwalya Nondo, spokesperson for the ministry of environment and natural resources points out that the project’s benefits extend beyond refurbished toilets and cheap fuel for residents. Harnessing renewable energy from human waste will also go a long way to protect Zambia’s fast-disappearing forests.

“At the moment charcoal burners destroy as much as 300,000 hectares of forest cover each year,” Nondo said.

The two biodigesters, and the gas pipes and support structures built in Kariba section of Kabushi has cost Kafubu Water and Sewerage Company around $830,000. The biodigesters have put Kabushi and the city of Ndola on the road to a sustainable new order for their city.