BIODIVERSITY: Conservation Groups Pounce on Year of the Tiger

WASHINGTON, Feb 10 2010 (IPS) - The Lunar New Year that begins Sunday will mark the start of the Chinese Zodiac’s Year of the Tiger, but conservationists are saying 2010 will have much more than symbolic significance for the Asian big cat. 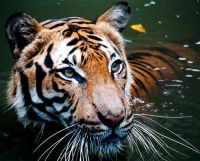 The World Wildlife Fund estimates there are about 3,200 left in the wild. This means “2010 is perhaps the last chance for the tiger,” according to Mike Baltzer, WWF director of the Global Tiger Initiative (GTI), a coalition of governments, agencies and organisations.

“But there is certainly a lot that can and has to be achieved and there is reason to be optimistic,” Baltzer told reporters Wednesday in Washington. He hopes that the next Year of the Tiger – 12 years from now –will be full of celebration, rather than the anxiety that characterises the state of tiger conservation today.

There are a range of events and campaigns lined up to make this year a make-or-break year for wild tigers. At the end of last month, a conference in Thailand brought together ministers from the 13 countries in whose forests tigers still roam. Among the agreements reached was a commitment to ensure a doubling of the wild tiger population by 2022, prohibit the expansion of roads into tiger habitat and crack down on poaching.

“If we don’t try to double tiger numbers now, we may end up with nothing,” Baltzer noted. At the time, he called the event the first time governments had made such a significant commitment to tiger conservation.

A workshop was also held in Kathmandu in October. The marquee event, though, will come in September, when Russian Prime Minister Vladimir Putin and World Bank President Robert Zoellick will host heads of state in Vladivostok to discuss financing for the efforts agreed on in January and to seek leaders’ approval of the those agreements.

GTI programme director Keshav Varma explained the Bank’s interest in the big cat’s survival Wednesday. “If the tiger population is healthy, the forest is healthy. Whether tigers disappear is an indication of the health of the forest,” he said. “If you save tigers, you save other species…If they are surviving we are doing our job well. If they are disappearing it means we are just talking.”

Tigers had numbered about 100,000 at the beginning of the 1900s, but a confluence of factors has clawed into their population since. Nine-tenths of tiger habitat has been consumed by urban expansion in recent decades and trade in tiger parts for traditional Chinese medicines and products like rugs has remained strong despite its illegality.

“Right now, the value of tigers is weighed in body parts that add up in someone’s bank account, rather than their cultural or ecological value,” said Crawford Allen, director of TRAFFIC-America, which monitors trade in wild plants and animals.

Tiger bones are used in wines that are drunk by the nouveau riche in China as a status symbol, he said. They are also powdered for Chinese medicines, while tiger penises are sought as an aphrodisiac.

Allen said there are crime syndicates that feed the demand for these status symbols and traditional medicinal products.

Illegal trade in wildlife products is reported to be the world’s third largest illegal trade after arms and drugs. Interpol estimates the annual value of the trade to be between 10 and 20 billion U.S. dollars.

Lixin Huang, president of the American College of Traditional Chinese Medicine, in San Francisco, said that her organisation has done a lot of work since the last Year of the Tiger to educate practitioners and the public that traditional Chinese medicine does not need tiger bones.

“There’s no need. There are enough alternatives to be used in hospitals. And there is no demand from traditional Chinese doctors,” she said. Educating the public is key, and her organisation is holding events throughout this year to spread awareness among traditional doctors and their patients, including at a conference on traditional Chinese medicine in Shanghai later this year, Huang said.

Trade in tiger products has been banned in China since 1993, but the number of wild tigers in the country – currently estimated at about 50 – has continued to decline. And China has indicated it hopes to lift the ban at some future point, even going as far leading an effort to remove language from the January declaration that would have called for maintaining the permanent ban on trade in tiger products.

One way in which this trade is still being fed today is through tigers from tiger farms. Tiger farms are found in China, Laos, Thailand and Vietnam. The farms in China are estimated to house about 5,000 cats, nearly twice the global wild population.

There are fears that wild tiger parts sometimes infiltrate farmed tiger markets, but the problems with farms go deeper than that.

Varma said the Bank opposes tiger farms and commercial exploitation and breeding of tigers in part because “once this becomes a business, it can have a negative effect on world markets by expanding demand [for tiger products].”

He also pointed to the threats posed by urbanisation. “This is not just a conservation issue,” Varma said.

Sybille Klenzendorf, director of WWF-U.S.’s Species Conservation Programme, said tigers currently live on only seven percent of their native range and that this range exists in isolated pockets that cut off one population from the others.

Varma said the Bank wants the pockets of wilderness that do remain to be valued. “These pockets are really under huge pressure,” and the Bank can help countries realise the value of these pockets and partner with them to help preserve tiger habitat, he said.

In the U.S., there are some 5,000 tigers in captivity, largely in private hands rather than zoos, according to TRAFFIC’s Allen. The WWF says only six percent of tigers in the U.S. live in accredited zoos, while the rest fall under the regulations of the U.S. Department of Agriculture, states or “virtually no regulation at all.”

Sixteen states allow keeping tigers, but have some regulations, but nine do not regulate the keeping of tigers at all, said Allen. He said Texas seems to have largest number of tigers in captivity. The state does have regulations, he said, but “it seems they are not being enforced.”

The main difficulty in getting a handle on the extent of captive tigers in the U.S. is that it is so difficult to determine how many tigers are actually kept in captivity in the country, he said.

Back in Asia, estimates put the number of tigers in the wild during the last Year of the Tiger – 1998 – between 5,000 and 7,000. Conservation groups will pounce on the fact that zodiac sign has rolled around again to make a major push at turning around the decline that has seen the population halve in 12 years.

“As many Asian countries are getting ready to celebrate the Year of the Tiger, conservationists are unfortunately not so joyful,” said WWF’s Klenzendorf.

But tigers are a very adaptable and resilient animal, so there is still hope, she said. “Tigers can recover in a very fast time if we solve what’s wrong…there’s lots to do and by saving tigers we save ourselves and so much more.”