GEORGETOWN, Feb 12 2010 (IPS) - The mining industry in Guyana is a vocal opponent of new conditions and regulations adopted by the government, which has engaged in a campaign to get millions in international donations for preserving the Amazon jungle as part of the country’s contribution to mitigating climate change. 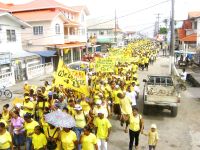 Political opponents have joined forces to warn those nations intending to sign on to the scheme that they need to include several layers of financial safeguards to ensure monies are expended for development purposes.

Last November, Norway signed a Guyana forest preservation deal to pay the former British colony in South America up to 250 million dollars over the next five years.

An initial disbursement of 30 million dollars could be in the national coffers as early as this month, according to Guyana’s President Bharrat Jagdeo.

Though Guyana emits minimal greenhouse-effect gases compared to industrialised countries, the deal mandates that this country step up efforts to curb emissions and do as much as it can to protect its still largely intact forest.

The result is that there have been renewed – and controversial – moves by authorities to better regulate industries like gold and diamond mining and the timbre sector, two of Guyana’s key foreign exchange earners.

Miner Fred McWilfred told Tierramérica that a new proposal mandating miners to wait up to six months before mining permits are approved could be a death sentence for small and medium mining operations like his.

Authorities argue, however, that they want the leeway for the state-run Forestry Commission to allow commercial but controlled harvesting of areas before small and medium scale miners, armed with shovels, power hoses and land dredges, move in and commence operations.

Most of these miners, who clear small patches in the jungle to work land claims where they believe gold deposits are hidden, have no commercial interests in trees they fell.

They say the six-month rule will completely ruin their lifeline businesses, because investment decisions will have to wait on bureaucrats. The rule is “unenforceable” and “ridiculous, to say the least,” Tony Shields, secretary of the Gold and Diamond Miners Association, told Tierramérica.

In a show of how strong opposition is to some of the new rules, miners last week demanded and won the resignation of association president Norman Mclean, a retired army chief of staff, who they accused of siding with the government on this issue. He has denied such charges.

On Feb. 1, nearly 4,000 miners blocked access to the northern town of Bartica to protest the new regime of regulations, despite the government’s ministerial delegation sent to stop them.

Analysts point out that regardless of its good intentions to protect the jungle, the Jagdeo administration might have unwittingly stirred up the conflict that has been fuelled by declarations from both sides.

In one such remark, Jagdeo vowed that his administration “will have to go it alone if we cannot do it together” with the mining sector. He has also said that the use of mercury to recover gold and diamonds from ore will soon be a thing of the past.

Prime Minister Samuel Hinds was just as forthright, saying on national television that the proposals to improve mining practices are here to stay.

The statements from Jagdeo and have only served to irk miners and reinforce their fears about the effects of the waiting period. The miners are convinced that the delay aims to prevent them from felling trees that are of commercial value for the timber industry.

Hinds maintains that the matter can be settled cordially, but both McWilfred and Shields say the administration is so anxious to comply with rules to bring in the Norwegian funds that the industry is the first to feel the pressure of tighter controls and tougher new rules.

In fact, Shields argues that what small mining operations need are not new measures, but for the geological commission to enforce in an organised way the existing systems for reforestation and cooperation between timber harvesters and miners.

The forestry and geology commissions are planning to beef up inspections to monitor the jungle, but it is so vast and some mining areas are so far away from administrative control that miners doubt the effectiveness of the measure.

Guyana has an estimated 25,000 miners, with one-third of them coming from neighbouring Brazil.

In the absence of any large-scale mine, last year the brigade of local and Brazilian miners working the industry sold a record 305,000 troy ounces to the state’s buying agency last year, making the industry second in foreign exchange importance after sugar – apparently encouraging players to flex their muscles more than ever, as evidenced in the recent Bartica blockade.