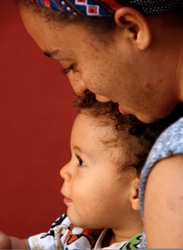 Experts say children will benefit in two ways – through the increase of the Child Support Grant (CSG) as well as the old age pension, which has shown to have a positive knock-on effect for the livelihoods of all members of a family.

“This move shows government’s ongoing commitment to its extensive system of social grants and that social grants have become part of the country’s development orthodoxy,” believes David Neves, researcher at the Institute for Poverty, Land and Agrarian Studies of the University of the Western Cape.

“Although it is not much of an increase in monetary terms, it is an improvement, especially because the CSG will include many more children due to the higher age threshold,” he adds.

The age extension means that caregivers of about 2.4 million more poor children will be able to access the grant, according to calculations by the South African Children’s Institute, which will help them feed, clothe, house and educate their children.

The latest Department of Social Development statistics show that more than 12.8 million children benefited from the CSG at the end of January 2009.

Regional Hunger and Vulnerability Project policy advisor Josee Koch agrees with Neves that the increase in monthly grant payments can generally be described as a positive development, but questions what impact it will have on individual recipients.

“Although in terms of fiscal increase it’s a significant amount of money, the extra R10 (1.3 dollars) per CSG recipient will be quickly eaten up with very basic necessities,” she reckons. “If you take inflation into account, it’s virtually no increase at all.”

However, Koch suggests that in the currently difficult financial times caused by the global economic downturn, it makes sense to spend cautiously. “The South African government is conservative in its financial approach this year, but it nonetheless has shown a sign of support of poor households,” she says. “Such an approach will benefit us in the long run.”

Grants have been playing an important role in redistributing wealth in South Africa and proven to be successful in reducing some of the income inequality. “Although concerns about the misuse of cash transfers keeps coming up, all our evidence suggests that it’s not true,” says Neves.

Quite the opposite is the case, he argues. Grants soften the effects of poverty by improving children’s health, reducing malnutrition and enabling better access to schooling, among other benefits.

Children whose parents receive the CSG are on average two centimeters taller than those who do not, says Koch. This indicates that grant recipients truly spend the extra money on more and better food, because stunting is one of the main results of malnutrition.

Moreover, households that receive a pension have a 12 percent higher work participation rate, Koch explains, which points to the fact that cash transfers free up family members to look for work – and if household income increases, children are generally better off, too.

“Families know very well what they need to spend the grant on. It’s important for people to make their own spending choices. The fact that you are poor doesn’t mean you are stupid,” highlights Koch. “Cash transfers are very empowering and have shown to motivate recipients to break the cycle of poverty.”

There is another positive side effect to social grants – increasing poor people’s spending power stimulates the local economy. “For every Rand (0.13 dollars) you pay out in social grants, you gain three Rands (0.4 dollars) in local economy,” notes Koch.

Still, there is a lot more that could be done to make sure South African children and teenagers are ensured their rights to education, health and a happy childhood. Social grants are only truly effective if they link into well-working public health and education systems, so that poor children can attend schools and access health care in the same way than their better-off peers.

“That’s where the state falls short in delivery. Our health and education systems are fairly inefficient, and 250 Rands (32.7 dollars) a month don’t make up for that,” says Neves.

But when comparing South Africa’s welfare system with that of other developing countries in the region, such as Lesotho or Malawi, South Africa is clearly the country whose government is making the strongest commitment to social grants.

“This shows that the South African government is on track. Comparatively, its welfare system is fairly proficient,” believes George Laryea-Adjel, chief of social policy and economics at the United Nations Children’s Fund in South Africa. “There are challenges in some areas, but government is trying hard to decrease operational bottlenecks through action plans and expanding capacity.”

Despite the good intentions, the positive trend of expanding the social welfare net might not last forever. “Grants have increased rapidly in recent years (since South Africa became a democracy in 1994), but we can’t continue expanding endlessly. We might get to a point where grants will plateau,” cautions Neves.

This means that more sustainable ways to alleviate poverty need to be pushed – the main one being job creation. “Creating jobs is a crucial instrument to reduce the number of people who need grants. It should be a priority and be pursued aggressively,” says Laryea-Adjel.

This will not happen overnight, he warns. “Transformation is going to take a while. In the meantime, we need the social security system.”