BUDAPEST, Feb 8 2010 (IPS) - The 2004 ‘Orange revolution’ saw a pro-Western leadership emerge victorious in a Presidential vote that opposed them to a pro-Russian candidate accused of vote rigging. After six years of political and economic chaos, the once villain Viktor Yanukovich has reclaimed the President’s post. 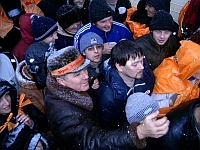 Ever since outgoing President Viktor Yushchenko and current Prime Minister Yuliya Timoshenko successfully led the 2004 popular uprising against allegations of electoral fraud that were internationally-backed, the high democratic expectations created gradually gave way to disappointment with the leaders’ inability to work together and to better the country’s depressing economic situation.

Following a campaign filled with mutual accusations of vote-rigging plans, the runoff of the presidential vote saw Yanukovich obtain 48.8 percent of the vote, closely followed by Timoshenko with 45.6 percent. The main outcome of the first round on Jan. 17 had been the sound defeat of President Viktor Yushchenko and his anti-Russian line.

In spite of popular fatigue with yearly elections, turnout bordered 70 percent. Representatives from the Organisation for Security and Co-operation in Europe (OSCE), the North Atlantic Treaty Organisation (NATO), the Parliamentary Assembly of the Council of Europe (PACE), and the European Union have all considered the election free and fair, and have called on all sides to accept its results.

Joao Soares, head of the OSCE mission saidd “yesterday’s voting was a very impressive example of a democratic election,” whereas PACE mission head Matyas Eorsi said in a press conference that both candidates “should agree that the election was democratic; Ukraine deserves to be applauded.”

Yanukovich secured victory with a message of national unity, geopolitical moderation and economic and political stability to a country that has been bitterly divided and unstable ever since the Orange revolution.

“I think that we have made the first step towards uniting the country,” Yanukovich said. “I will spare no effort so that Ukrainians, no matter in what part of the country they live, feel comfort and peace in a stable country.”

For years accused of not being truly democratic, Yanukovych has said that, although he considered the period following the Orange revolution a “nightmare”, he is “not opposed to the slogans” of democracy and Europe promoted back then.

While it is clear that relations with Russia will continue on the path of normalisation favoured by both presidential contenders, the main question under a Yanukovich government is to what extent he will be accepted by Western countries as a reliable partner.

Yanukovich is not promising EU membership any time soon, but his support for step-by-step Europeanisation shows that the goal of entering the EU has become consensual among both the population and Ukraine’s political elites. Timoshenko has so far refused to concede defeat as many of her allies make allegations of massive fraud, but analysts believe she will eventually admit defeat.

“Timoshenko was defeated with dignity, the numbers show it was a minimal defeat, but if she decides to fight the results she will lose all international support,” Balazs Jarabik, Ukrainian expert at the Madrid-based Foundation for Foreign Relations and International Dialogue (FRIDE) told IPS.

The election winner Yanukovich recognised Timoshenko was “a strong rival or opponent to me” but called on her to lose “with dignity” and follow “the road all the way and admit defeat just like I did” in the past.

“She probably needs time to consult with her political allies and decide whether to stop being a serious obstacle and focus on keeping her premier position,” Jarabik told IPS.

With Prime Minister Timoshenko still holding a majority in the Ukrainian parliament, the prospect of a continued crisis in governance is more than likely.

If the two bitter rivals don’t reach a power-sharing agreement, the solution may lie in Yanukovich calling early parliamentary elections to consolidate his power with a new parliamentary majority that will prove more cooperative. Shortly after his victory, Yanukovich reminded the Prime Minister she “should start preparing for dismissal. She understands this very well. I think she will get a proposal to this effect.”

However, Yanukovich may not be able to accomplish her dismissal without help. Outgoing President Yushchenko has insisted he is not leaving politics, and Jarabik believes that in exchange for certain guarantees, he might use his deputies to support Yanukovich in dismissing Timoshenko from her post as Prime Minister.

“Yushchenko is willing to finish off Timoshenko in exchange for a high price, which could be asking for a prime ministerial position for an ally of his or even for himself, although that would be a bit extreme,” Jarabik told IPS.

The elections also signaled that Ukrainians are less preoccupied with national, symbolic and historical issues promoted by the current President and more concerned with Ukraine’s difficult socio-economic situation.

Yanukovich will inherit a country in an extremely dire economic condition. He will have to prove a more reliable partner to the International Monetary Fund (IMF) than his predecessors were in order to obtain much needed loans.

Ukraine’s economy continues to be on the verge of collapse, and budget revenues have diminished as a result of the global financial crisis, which may lead to a new round of privatisations.

Representatives of large businesses will continue to have a say in how Ukraine’s economic policy is run, and the business sectors behind Yanukovich are likely to demand policies that promote exports.